Sharing the Bomb among Friends: The Dilemmas of Sino-Soviet Strategic Cooperation 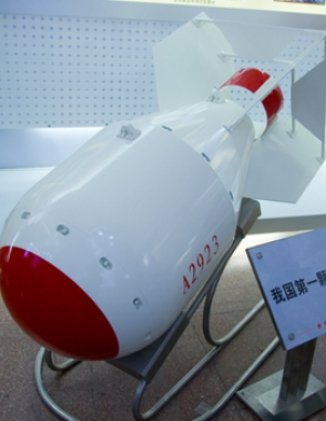 Through the middle 1950s the Chinese eagerly contributed to matters of strategic cooperation with the socialist bloc and the Soviet Union.[1]  On 20 January 1955, for example, the Chinese willingly rewrote an agreement that initially called for Chinese uranium to stay in China "for the internal needs of the country," and instead began exporting uranium to the Soviet Union.[2]  "We are very grateful to the Soviet government" and the Soviet advisers for their work on uranium ore production, the Chinese emphasized to their Soviet colleagues.  "We completely agree to stop observing the 20 January 1955 agreement."[3]  On another matter that subsequently became controversial, the construction of long-wave radio receiving stations along the Chinese coast, Zhou Enlai as well initially responded with enthusiasm in March-April 1956 to requests from Nikolai A. Bulganin to begin their construction.[4]  The Chinese routinely allowed the Soviets almost to treat Northeast China as part of Soviet territory, allowing them to establish communication and transportation networks between cities on both sides of the border, and granting them access to military depots capable of servicing their airplanes and other military equipment.[5]  The development of the Chinese Northeast, Politburo member Zhu De told Soviet ambassador Pavel Yudin on 22 February 1958, would replicate Soviet successes in the Far East, and “join the rich regions of China in terms of natural resources (Xinjiang, Sichuan, the southern provinces) with the Soviet Union.”[6]  In other parts of China, the Chinese followed the advice of Soviet defense experts about the location of factories important to the defense industry.[7]

For their cooperation the Chinese expected quite a bit in return.  From the start they were suspicious of “peaceful coexistence” in Soviet foreign policy, a reformist initiative that emerged soon after the death of Stalin in March 1953.  Instead they hoped for an enduring opposition to the American “imperialists” who supported the Guomindang in the civil war and continued to prevent the CCP from reuniting Taiwan to the mainland. Numerous high level Chinese officials routinely reminded their socialist bloc counterparts of the strategic significance of China’s participation in the alliance.[8] Even if our “enemies conquer the European part of the Soviet Union,” Mao explained to Yudin on 2 May 1956, “then in that case the USSR will still have the vast and rich regions of Siberia and the Far East.”  A nuclear exchange was survivable for the socialist bloc.  “Chinese history,” he continued, “provides much support for the fact that even a significant loss of population does not necessarily mean the destruction of the nation.”[9]  Ambassador Liu Xiao made similar comments to V.A. Zorin in Moscow in early 1955.  Mao believed, Liu Xiao conveyed, that China could withstand casualties of “100 million men or more” in a nuclear attack from America, and maintain the strength to “assert its rights until the end.”[10]  After the withdrawal of the advisers in the summer of 1960, Soviet ministry of foreign affairs officials carefully compiled examples of Chinese opposition to their policies as well as Chinese references to the usefulness of nuclear war.  We will “conduct our struggle until the end,” Chen Yi told a group of Soviet specialists on 5 June 1958; we would like to “create a tense situation for the Americans and Jiang Jieshi” in Taiwan, Zhou Enlai told Soviet embassy workers on 5 September 1958; we will absorb the “first blow” in a nuclear exchange, he added on 30 September; we must not rule out the “military method” as policy, Mao explained to bloc advisers on 2 October 1958; Chinese literature, film, and culture generally should cultivate a “martial spirit” that will prepare the population for war, argued Zhu De to N.G. Sudarikov on 9 October 1958.[11]

The Chinese wanted the bomb, and eagerly participated in research at the new Soviet Joint Institute for Nuclear Studies at Dubna, outside of Moscow, founded in 1955. From 1955 to 1958 the Soviets and Chinese signed six related accords designed to foster China’s nuclear science, industry, and weapons program.  They collaborated on uranium mining and production, the development of physics, the education of Chinese students in nuclear physics in the Soviet Union, the utilization of atomic energy, and the construction of a heavy-water research reactor, a cyclotron, and a particle accelerator in China.[12]  The collaboration was to include the transfer of the bomb itself to China.  Chairman of the Supreme Soviet Kliment Voroshilov visited China in April 1957, and 15 October 1957 the two sides agreed on the New Defense Technical Accord.  Marshal Nie Rongzhen and his deputees Chen Geng and Song Renqiong went to Moscow to clarify the terms of the exchange.[13]  The Soviets were to supply a prototype of the atomic bomb, missiles, and related defense technology to the Chinese.[14]  A military delegation led by Minister of Defense Marshal Peng Dehuai stayed on in Moscow for one month after the November 1957 conference of socialist parties.  The two sides attempted to coordinate and standardize weapons production and communication systems, and foster training and education exchanges.[15]

The documents translated here, from the Ministry of Defense Industry collection (fond) of the Russian State Archive of the Economy in Moscow, illustrate the difficulties of Sino-Soviet military cooperation at the lower levels of exchange and collaboration.[16]  The transcripts of meetings from the fall of 1957 suggest a workmanlike environment of practical concerns distant from the dramatic assertions and preoccupations common to Chairman Mao and other top officials.  At this level of the exchange, officials tended not to discuss Marxist ideology or apocalyptic encounters with the “imperialists,” but struggled with practical problems such as the comparative weaknesses of Soviet technology, the quality of Soviet blueprints, the training of Chinese technical specialists, the financing of the exchange, and the question of Chinese “self-reliance” (zili gengsheng) rather than dependence on the bloc.  These were problems common to the Sino-Soviet alliance generally, which was a massive effort at collaboration that linked numerous ministries, enterprises, industries and specialists from not just the Soviet Union and China but also the countries of Eastern Europe.

The general problems and tensions shaping the alliance are evident in these documents on Sino-Soviet defense cooperation.  The head of the Chinese delegation, Qian Xuesen, was a leader in Chinese missile-development research who received a Ph.D. in physics at the California Institute of Technology and worked at the Jet Propulsion Laboratory in California.[17]   Such a background obviously enabled him to pose comparative questions about the strengths and weaknesses of Soviet programs.  This was a perpetually sensitive matter, evident in the routine questions posed by the Chinese to the visiting Soviet advisers in numerous areas of the exchange.[18]  “Old Chinese technical workers” in particular frequently challenged the authority of the Soviet experts in China.[19]  Money and the financing of the exchange was another sensitive topic, contested from the very signing in Moscow of the Treaty of Friendship and Mutual Alliance in February 1950.[20]  The importance and necessity of Chinese “self-reliance” became increasingly important to many high level officials as the relationship evolved, but in numerous practical matters the Chinese simply preferred to import finished products and ready-to-use technology.  Zhou Enlai admitted as much in a conversation with East German, Polish and Czechoslovak officials in February 1955, explaining that China’s comparative poverty and lack of development justified such a strategy.[21]  In the discussions here, Wang Yi, from the PLA General Staff, bluntly informs the Soviets that the “best alternative” would be if the Soviets simply provided a guided missile capable of delivering an atomic bomb.  The Soviets had developed an intercontinental missile capable of transporting an atomic bomb (the R-7), which they successfully tested in May 1957.[22]  They shipped two R-2 missiles (a related model) to China in January 1958.[23]

The Soviets stalled on the delivery of the bomb itself, however, and the subsequent joint defense ministry exchanges became increasingly testy.  In the spring of 1958 Khrushchev bluntly informed Zhou Enlai, without any interest in discussion, of the Soviet decision to pursue disarmament and arms control agreements with the United States and England.[24]  The formal abrogation of the Sino-Soviet agreement on military-technological cooperation was delivered on 20 June 1959.  In an effort to console the Chinese, Soviet and East European officials repeatedly emphasized the importance of the “nuclear umbrella” offered by the Soviet possession of the bomb.  “Invaders of China are also invaders of the Soviet Union,” Khrushchev tried to assure them in September 1958.[25]  The Chinese, however, were unconvinced, and disputes over strategic cooperation and the bomb contributed to the unfolding of the split.  They continued with their efforts at nuclear development after the withdrawal of the bloc advisers in the summer of 1960, and detonated their own bomb at Lop Nor in Xinjiang in October 1964.  This feat would have been “impossible,” notes Zhihua Shen, without the earlier history of Soviet aid.[26]

Austin Jersild is Associate Professor of History at Old Dominion University. His current research explores the treatment and perception of China within the socialist bloc of the 1950s.

Obtained and translated by Austin Jersild

11 September 1957, “Protocol No. 1 of the Joint Meeting of Members of the Delegations of the Ministry of Defense Industry and the Chinese People’s Republic”

23 September 1957, “To the Chair of the State Committee of the Soviet of Ministers of the USSR for external economic ties, comrade M.G. Pervukhin”

25 September 1957, “Stenogram of the meeting of workers of the Ministry of Defense Industry with representatives of the Chinese delegation”

2 October 1957, “Stenogram of the meeting of the representatives of the Chinese delegation and workers of the Ministry of Defense Industry”

[1] Portions of this introduction are drawn from my forthcoming book, The Sino-Soviet Alliance:  An International History (Chapel Hill:  University of North Carolina).