From Stalemate to Checkmate: What the Siege of Aleppo Means for Turkey 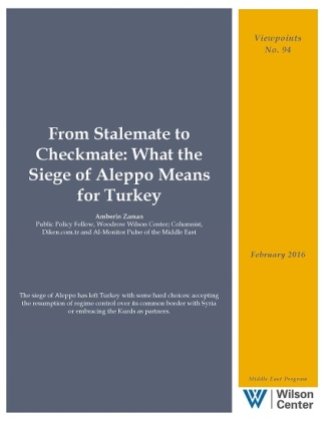 From Stalemate to Checkmate: What the siege of Aleppo means for Turkey

The siege of Aleppo by Russian-backed Syrian regime forces is in full swing. Tens of thousands of Syrians are stranded at the Bab al Salam (Oncupinar) border crossing with Turkey. The country is already home to some 2.5 million Syrian refugees and it says it cannot handle any more. Instead, Turkey’s Red Crescent and disaster relief agency, AFAD, are scrambling to provide them with food and shelter from across the border. Turkish President Recep Tayyip Erdogan declared that the Syrians would be allowed in “only if necessary.”

What would it take? More money from the European Union, which has already offered Turkey $3.3 billion in exchange for Turkish pledges to hold back the droves of Syrian refugees seeking to cross illegally into Europe? Angela Merkel, the German Chancellor, flew to Ankara on February 8, 2016 to meet with Ahmet Davutoglu, the Turkish prime minister, fueling speculation that more cash might indeed be on the table.

There may be another explanation for Ankara’s reticence: to exert moral pressure (some would call it blackmail) on the United States to create a safe-haven for opposition rebels and refugees. Turkey and its Gulf allies, Qatar and Saudi Arabia, have been clamoring for one since the start of the Syrian conflict, saying it’s the only way to eject Syrian President Bashar al-Assad from power. The Obama administration hasn’t budged, nor will it.

On top of the usual arguments about not wanting to replicate the mess in Iraq, U.S. officials warn of a real risk of confrontation with Russia whose Su-34 tactical bombers command the skies west of Aleppo. None of this cuts any ice with Ankara, which is already in a lather over U.S. support for the People’s Protections Units (YPG), the Syrian Kurdish militia which is ISIS’s most formidable foe on the ground. Turkey calls the YPG “terrorists” because of their close ties to the Kurdistan Workers’ Party (PKK), the armed group that is fighting for self-rule inside Turkey. Images of President Obama’s Special Envoy to the Global Coalition against ISIS, Brett McGurk, exchanging pleasantries with YPG commanders during a lightening trip to the Kurdish-controlled town of Kobane proved one slight too many. “Who’s your partner the terrorist PYD [the YPG’s political arm] or Turkey,” thundered Erdogan on a flight home from Latin America.

On February 2, the Syrian army and its allies cut off the critical supply route between the city of Aleppo and Turkey known as the Azaz corridor. On February 8, they recaptured the village of Kfeen bringing them to within 18 miles of the Turkish border. Fabrice Balanche, research director at the University of Lyon and a visiting fellow at the Washington Institute for Near East Policy, argues that this may be a turning point in the conflict. “The development could put the entire Turkey-Syria border under the control of pro-Assad forces within a matter of months, or spur Kurdish forces there to choose co-existence with Assad,” Balanche observed in a recent piece.

Although the Kurds have resisted Turkish pressure to join the rebel campaign against Assad—opting instead to consolidate their self-rule—the Kurds don’t want to co-exist with Assad any more than the Turks do. The horrors inflicted on the Kurds by Assad and his late father, Hafez al-Assad, are well documented. Should his forces reassert control over the Turkish Syrian border as Balanche suggests, this would bring Kurdish dreams of autonomy in northern Syria crashing down. The Kurds may end up fighting Assad after all.

Pick Your Poison: Assad or the Kurds

The catch is that the return of the regime may prove a less bitter pill for Turkey to swallow. Indeed, it is perfectly plausible that maneuvering Turkey into just such a choice—to either ditch its support for the rebels or digest the emergence of a PKK-dominated Kurdish statelet—was just what Assad intended when he ceded control of large chunks of the border to the Kurds in 2012.

YPG officials say they are ready to help the rebels—and Turkey—to fend off further Russian-backed advances and preserve their links to Aleppo. They claim they could do so by pushing eastwards from the areas they control in and around the town of Afrin or by closing in from the Tishreen dam to the west. In both cases, ISIS would get rolled back as well. The payback for the YPG would be to achieve its strategic goal of linking up the Kurdish run zones to the west of the Euphrates with that of Afrin. But should Assad’s forces continue their advance, the Kurds stand to lose everything. This, in turn, means that they will be open to compromises, not only with Turkey, but with the rebels as well. In short, circumstances have never been this ripe for a Turkish-Kurdish deal. Will Turkey muster the courage to seize it?

Assad and his Russian friends are betting it won’t. Either way Turkey’s Syria policy is in ruins.