The Looming Problem of Tal Afar 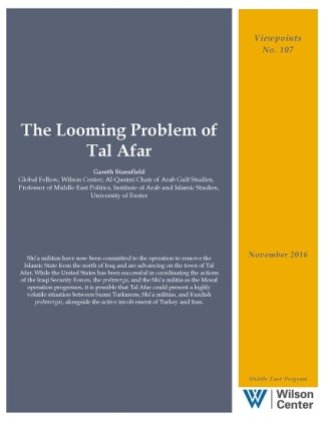 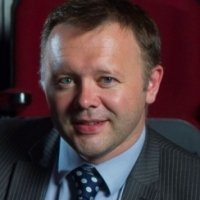 The opening weeks of the operation to liberate the ISIS-held Nineveh province, which aims to expel ISIS from the seat of its caliphate in Mosul, has seemingly gone quite well. The advances made by the coordinated units of the Iraqi Security Forces (ISF) and the Kurdish peshmerga has been steady, cautious even, as villages and towns have been retaken from a northern front toward Bashiqa, to an eastern and southern front from Qayyarah toward Hamdaniya (Bakhdida) and Bartella, to the very outskirts of the city of Mosul itself. What has been absent at the beginning of the operation in mid-October, however, was the opening of a front focusing on the western approaches to Mosul—south of Sinjar and toward Tal Afar. The push toward Tal Afar has now begun, but not by the ISF or the Kurdish peshmerga. Rather, the forces that are now surrounding Tal Afar are from Hashed al-Sha’bi—better known as the Shi’a militias—in what is potentially a dangerous situation that, if allowed to get out of control, could destabilize the Mosul operation as a whole.

The Importance of Tal Afar

Tal Afar is a significant town of some 100,000 people, lying 60 km to the west of Mosul. The town controls the main artery between Mosul and the Syrian border, on to Raqqa, and thus constitutes not only a vital supply line linking the two principal cities of its caliphate together, but also an evacuation route out of Mosul into Syria. The town is populated predominantly by Sunni Turkmen who may have constituted up to 80 percent of Tal Afar’s numbers before the appearance of ISIS in 2014. Since then, the remaining Kurds and Shi’a Turkmens fled or were killed.

Western powers would be well advised to consider the potential for Tal Afar to be at best a stumbling block, or at worst a trigger for a multi-dimensional conflict to break out in the north of Iraq.

The political and human geography of Tal Afar therefore suggests that the retaking of the town may not be straightforward. The tactical significance to ISIS, with regard to its linkage to Syria and its heavily Sunni demographics, should be enough to make Iraq’s military planners think carefully. But the deeper history of Tal Afar suggests it is a looming problem of significance. As a former Ottoman garrison town, Tal Afar’s Sunni Turkmen population is a legacy of the long gone Ottoman Empire—but this is now an empire that lives again in the minds of political leaders in Turkey. Prime Minister Recep Tayyip Erdoğan has already made his views clear that Turkey “would not look favorably” on the entry of Shi’a militias into the town, evoking the possibility of direct Turkish military intervention in Iraq in order to protect ethnic Sunni Turkmens.

A History of Division

From the perspective of the Shi’a militias, the Turkmens of Tal Afar are despised not because they are Sunnis per se, but because of their role in Nineveh’s and Iraq’s politics in modern history. Under Saddam Hussein, Tal Afar’s Sunni Turkmens found themselves to be favored by the regime, with high numbers of Sunni Turkmens in the military and in the security service. The legacy of this dynamic continued after 2003, and what had been a division caused by the Ba’ath regime now transformed into open sectarian differences between Sunni and Shi’a Turkmens in Tal Afar. As an important town on what was, by 2005, a jihadist highway running between Syria and northern Iraq, Tal Afar became a focal point of al-Qaeda Iraq (AQI) led by Abu Musab al-Zarqawi. By the spring of 2005, the town had become totally polarized; Sunni and Shi’a death squads engaged in the systematic killing of the other, and the minority Shi’as largely fled. With the appearance of ISIS in 2014, Tal Afar became an important element in the political geography of the new caliphate, serving to protect the western approaches of Mosul while also linking the Iraqi part of the new entity to its Syrian part. In essence, Tal Afar was the guarantor of ISIS’s strategic depth, giving it opportunities to move forces and material as needed. But Tal Afar would also prove important because of its jihadist and insurgent background. With the strong legacy of AQI in Tal Afar, ISIS had a reservoir of leadership talent to use. Kurdish sources have noted the prevalence of people from Tal Afar in military command positions, how there is a disproportionately high number of ISIS judges hailing from Tal Afar, and that the feared ISIS’s religious police—the hisbah—is also characterized by a strong Tal Afar presence.

The Shi’a Militia and ISIS’s Heart of Darkness

Because of Tal Afar’s early and close association with Sunni jihadism in Iraq, and perhaps also because of the astonishingly brutal nature of the sectarian conflict that engulfed Tal Afar from 2005-2007, the town has taken on the reputation of being ISIS’s very own heart of darkness among Shi’as and Kurds alike. With hindsight admittedly, it is not then surprising that senior Shi’a leaders began to agitate for a more obvious role in the unfolding operations against ISIS in Mosul. And if they were not allowed to enter Mosul itself, then they would be extremely keen to retake Tal Afar. Indeed, for some it would seem that Tal Afar was a more attractive opportunity than Mosul itself. Speaking to an assembled crowd of militiamen in Baghdad at the end of October, Qais al-Khazali, the leader of the feared Asaib Ahl al-Haq Shi’a militia, said that “we are coming to Tal Afar to avenge Hussein,” ominously linking the retaking of the Tal Afar with the martyrdom of the Imam Hussein in the seventh century. In Shi’a terms, there can be no clearer statement of sectarian intent. By November 1, Shi’a militias—principally Hadi al-Amiri’s Badr Organization and Qais al-Khazali’s Asaib Ahl al-Haq—had reportedly advanced north and retaken around 25 villages in the environs of Tal Afar, remaining some 15 km outside the town’s limits.

For the Kurds, and especially the Kurdistan Democratic Party (KDP) and its leader Masoud Barzani, Tal Afar also poses problems. While the Kurdish leaders are no friends of the Sunni insurgents, they are perhaps even more fearful of the presence of Shi’a militias so close to the Kurdistan Region’s borders. Another problem for the KDP in particular is that the possible entry of the Kurdistan Workers’ Party (PKK) into the conflict would constitute a clear and present danger that would have to be removed. Why would the PKK engage in Tal Afar? There would be several reasons to do so, and not least because they could be encouraged by the Shi’a militias’ leadership to further antagonize Turkey. The Shi’a militia view Prime Minister Erdoğan’s strong words against Baghdad and the Shi’a militias, including his warning against the attacking of Turkmens in Tal Afar, as a reassertion of an Ottoman, and Sunni, geopolitical view, and one that should be challenged—and there is no better way of challenging the Turkish state than with the PKK. The PKK, too, may also find it politically useful to enter Tal Afar in an attempt to further challenge the KDP. With the PKK taking a leading role in the liberation of key ISIS strongholds, their standing among Kurds would only be strengthened, much to Barzani’s aggravation.

The City of Revenge

So the scene is set for an extremely dangerous episode to unfold in Tal Afar, between Shi’a militias, who are seeking revenge for the devastation wrought on them by Sunni jihadists since 2005, and ISIS fighters who, if history is our guide, would prove to be highly capable in their defense of the town. There could also, quite easily, be a Shi’a militia-KDP confrontation, particularly if the PKK is engaged in the fight. And, adding a further level of complexity and danger is the strong possibility that regional powers—namely Turkey and Iran—could become further involved in the interests of protecting ethnic cousins (the Turkmens in Turkey’s case) or religious brothers (the Shi’a in Iran’s case). Far from being a sideshow on the way to Mosul, Western powers would be well advised to consider the potential for Tal Afar to be at best a stumbling block, or at worst a trigger for a multi-dimensional conflict to break out in the north of Iraq—a trigger that could easily make the comparatively straightforward calculus of the anti-ISIS campaign in Nineveh turn into something as complex, convoluted, and unpredictable as the conflict that now haunts northern Syria.