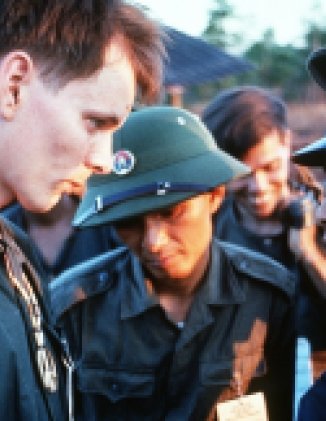 One of the twenty eight American POWs released by the Viet Cong on February 12, 1973.  Source

North Vietnam’s treatment of American airmen shot down and captured over North Vietnam was a subject of controversy and concern throughout the Vietnam War. From the very beginning of the war, North Vietnam’s stated position was that American prisoners captured in North Vietnam were “war criminals” who had committed crimes against the North Vietnamese people in the course of an illegal war of aggression and that therefore the American prisoners were not entitled to the privileges and rights granted to prisoners of war (POW) under the terms of the Geneva Convention.  The North Vietnamese refused to provide the International Red Cross with the names of Americans who were being held prisoner in North Vietnam and did not allow regular inspection visits by the International Red Cross to ensure that the prisoners were being treated properly in accordance with the terms of the 1947 Geneva Convention on POWs.

In the spring of 1969 the Nixon Administration, apparently for both humanitarian and domestic political reasons, initiated a massive public relations campaign to demand that the North Vietnamese adhere to the provisions of the Geneva Convention on the treatment of Prisoners of War.  The United States also officially raised this subject in the recently-initiated Vietnam Peace Conference in Paris.

On August 5th, 1969 North Vietnam released three American POWs as a “good-will” gesture to a visiting delegation of American antiwar activists.  On September 2nd, 1969 the U.S. Defense Department held a major press conference in which two of the newly-released prisoners provided detailed descriptions of the mistreatment and torture to which they and their fellow American prisoners had been subjected by their North Vietnamese captors.  The press conference, which purely by chance occurred on the same day that Vietnam’s revered President Ho Chi Minh died, caused an immediate firestorm of publicity both in the United States and around the world.  According to information provided by American prisoners after their release in 1973, North Vietnamese treatment of the POWs underwent a sudden and marked improvement in the fall of 1969.[1]

A Vietnamese Communist Party document that has now been declassified reveals that the Vietnamese Communist Party Politburo itself discussed the issue of the treatment of the American POWs in the fall of 1969. The Party Politburo issued a special resolution providing detailed instructions for improving the treatment and living conditions of the American prisoners. The resolution stated that even though North Vietnam still did not consider the American prisoners to be bona fide Prisoners of War, the American prisoners must be treated in accordance with most, if not all, of the terms of the Geneva Convention.  While the document does not explain the reasons behind this resolution, the fact that the Politburo, North Vietnam’s supreme governing body, had felt it necessary to issue such a document indicates the level of seriousness and concern that the North Vietnamese leadership attached to this problem.

Merle L. Pribbenow, a native of the Pacific Northwest, graduated from the University of Washington in 1968 with a bachelor's degree in political science.  After serving in the CIA for 27 years, he retired in 1995 and is now an independent researcher/author specializing in the Vietnam War.

On Policy Toward Captured American Pilots in North Vietnam

1.  Our humanitarian policy toward American pilots is aimed at further illuminating our just cause in order to win over the American people, support our enemy proselyting operations, and win the sympathy of world opinion for our people’s resistance war against the Americans to save the nation.

2.  For that reason, we must fully implement the following points:

3.  In addition to strengthening the forces assigned to handle the American pilots, we need to ensure that the cadres and enlisted men directly responsible for this task fully understand the political significance of our policy toward the pilots in order to increase their spirit of responsibility so that they will strive to overcome difficulties and will fully implement the policy provisions outlined in this resolution.

4.  The Ministry of Foreign Affairs and the General Political Department will study the possibility of allowing the Red Cross Associations of some countries to visit the prisoners.