Under Construction: Lebanon at Seventy-Five 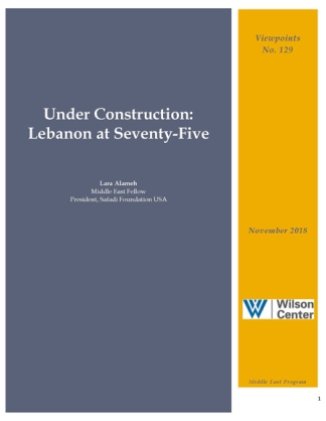 Lebanon recently marked its 75th independence day, honoring a national pact that was made in 1943, which gave birth to a parliamentary democracy in a region dominated by non-democratic regimes. However, this unwritten compromise that formalized the country’s leadership along sectarian lines has failed to deliver a national vision that secures civil peace and democratic governance. Instead, a corrupt male-dominated political elite that hedges its bets on short-term interests has fueled the growth of proxy powers and sectarian rivalries resulting in an unending cycle of political paralysis.

While there are serious and debilitating factors that undermine Lebanon’s sovereignty and independence, both internally and externally, nothing impedes Lebanon’s long-term governance more than the lack of consensus and a shared sense of national identity that transcends sectarian and factional allegiances. Lebanon’s 15-year civil war is commonly referenced as the original wound, from which its citizens cannot escape. However, it is only one of many examples in a system that has unsuccessfully fostered a shared identity. The establishment of a national public service program that incorporates education and reconciliation is a proactive way to nurture a new social contract between citizens and their government. Such an initiative will heal the wounds that have been allowed to fester and grow with every issue that takes center stage on a national level.

While a basic requirement for democracy and stability in general, consensus in Lebanon has been taken to such an extreme that it has become counter-effective. In times of crisis or external pressures the political system has at its best led to paralysis, and at its worst, to outbreaks in violence and prolonged civil strife. A consociational system that requires cooperation by all involved parties, inevitably leads to a degree of immobilism. For most of Lebanon’s political history sectarian elites have agreed to the general rules of the game and used them to gain more benefits to their constituencies. These dynamics have sometimes led to resorting to the lowest common denominator, undermining a spirit of meritocracy needed for real reforms that would contribute to the development of a shared narrative.

Imposing consensus as a condition for the functioning of government with all its aspects makes consensus a very volatile commodity manipulated by the players of the game. The fact is the changing demographic realities and balance-of-power among the various confessional communities on the ground are contradictory with the requirement of stable governing.

Any leader or party that claims representation of a certain community can withdraw from the game and strip it of its legitimacy. This is especially true if the concerned actors claim to hold a representation monopoly over a whole confessional group. As a result, it becomes much easier to block than facilitate any decision, and it becomes impossible to govern when all the parties have equal power to block the whole system.

Absent the effective institutional mechanisms needed for national dialogue, concerted efforts should be made to give citizens a space to air their grievances in a safe environment without fear of retribution. When the war was brought to an end via a political power sharing agreement brokered by politicians, economic incentives trumped long-standing political conflicts and post-war reconciliation was swept under the rug in exchange for lucrative business schemes that lined the pockets of the country’s elite. The Tai’if Agreement formalized this strategy by excluding civil society input or initiatives. Warlords and sectarian political leaders concluded hostilities with a power-sharing agreement that did not address any of the root causes of instability in a comprehensive way. Instead, leaders further deepened sectarianism, while ignoring governance challenges that would be critical to restoring rule of law or an overall structure that would enable long-term peace building.

This placed a heavy burden on civil society and state institutions in several ways. First, the civil war led to a total collapse of state institutions throughout the country. NGOs were responsible for the basic delivery of services and goods. Secondly, this put a huge burden on NGOs who sought reconciliation on a community level but did not have the authority of the state to back those initiatives. Finally, civil society had to mobilize communities across confessional divides on a grass-roots level to support new political realities. This continues to be the most difficult task until today as there is an overall lack of knowledge about religion, faiths and narratives. Lebanese manage the conflict by forgetting and ignoring the confessional creations of competing national identities that are only continuing to polarize society more and more. Most damaging is that it prevents an acknowledgement of the “other,” and their legitimate narratives—an important pre-requisite of any true conflict resolution process that integrates reconciliation and forgiveness.

Furthermore, sectarianism has deepened amongst the post civil war generation that has lost the conviviality previous generations took for granted. It is not uncommon to find young Lebanese who are completely unfamiliar with neighborhoods outside their sect, including never visiting some of the country’s historical attractions simply due to what they perceive as unfriendly or unfamiliar geography. Such patterns are not representative of a post-conflict environment.

Instead, they suggest the implications of a temporary bandage on the country’s wounds that long for meaningful resolution.

Addressing this challenge will require a long-term investment of political will on the part of all stakeholders. The implementation of a national public service program aimed at educating young people will plant the seeds for future generations to develop a citizen based approach to their national identity. Students should be expected to have performed a minimum number of hours in a national service program prior to graduating high school. On an operational level, students will select an NGO from a list of vetted and pre-approved organizations whose visions serve interests across sectarian, economic and regional divides. Once an NGO is selected, the student will then be deployed to work in different areas of Lebanon. Through this experience, students will deepen their collaboration with others and gain a wider understanding of a citizen-based national narrative that is strengthened by cooperation on issues such as the environment and poverty-reduction.

With the region’s current geopolitical conflicts unresolved and the threat they pose to Lebanon’s weak institutions, the government is constrained and limited in its ability to initiate the policy changes needed to build a shared narrative. The national public service program offers a strategic approach that strengthens civil society inputs on such a vision, while reducing domestic pressures that are fueled by polarizing narratives. The results will not be immediate. Although, over time, young Lebanese will learn to develop a concept of citizenship that transcends sectarian boundaries and it will pave the way for the development of institutions that are more inclusive by empowering the voices of civil society, youth and women.

The Lebanese are a big people with a small home. Outside of Lebanon, Lebanese immigrants have achieved great strides in their adopted societies. They are doctors, lawyers, scientists, parliamentarians, presidents and much more. These successes were possible because they emphasized hard work and a collective sense of responsibility over their differences.

Sadly, despite the well-known pride Lebanese have, they have yet to adapt a collective sense of national pride at home, choosing to live as strangers and not as neighbors. While the meaning of what it means to be a Lebanese citizen is still under construction, Lebanon’s independence will not heal its trauma until the Lebanese first stake steps to heal their own.

President of the Board and CEO, Safadi Foundation USA
Read More 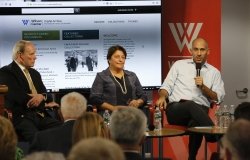 Book
Rule of Law
The Corruption Cure: How Citizens and Leaders Can Combat Graft
By Robert I. Rotberg 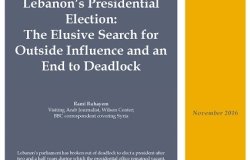 Publication
Lebanon’s Presidential Election: The Elusive Search for Outside Influence and an End to Deadlock

Article
Security and Defense
No, the Iran Nuclear Deal Will Not Be Good for the U.S.
By Aaron David Miller on June 18, 2015 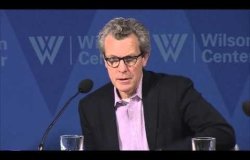 Video
Security and Defense
Year of Crisis: The Middle East in 2015 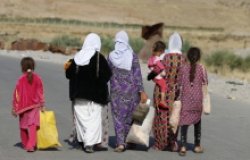 Article
Human Rights
How Will Women in the Middle East Fare in 2015?
By Haleh Esfandiari on January 5, 2015