Skip to main content
Support
Show
Live Now
Ending Wildlife Crime to Protect Animals, Human Health, and the Planet
Watch Now
Play Video
Show
Live Now
Disease-Related Stigmas, Their Origins, Their Persistence, and Have We Learned Anything to Stop Them? A Comparative Look at HIV/AIDS and COVID-19
Show
Live Now
US Farm Labor and Trade in 2021
Explore More
Close
Blog post
Human Rights
Childhood Interrupted: The Case of Syrian Refugees
By Merissa Khurma on June 18, 2021
Share on FacebookShare on TwitterShare via Email
Share
Part of the Viewpoints Series
Publication 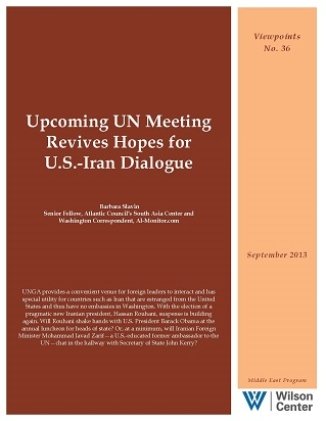 UNGA provides a convenient venue for foreign leaders to interact and has special utility for countries such as Iran that are estranged from the United States and thus have no embassies in Washington. With the election of a pragmatic new Iranian president, Hassan Rouhani, suspense is building again. Will Rouhani shake hands with U.S. President Barack Obama at the annual luncheon for heads of state? Or, at a minimum, will Iranian Foreign Minister Mohammad Javad Zarif—a U.S.-educated former ambassador to the UN—chat in the hallway with Secretary of State John Kerry?