Venezuela in 2023 and Beyond: Charting a New Course 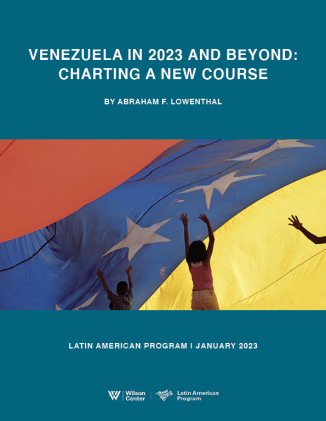 A new report published by the Woodrow Wilson International Center for Scholars’s Latin American Program, “Venezuela in 2023 and Beyond: Charting a New Course,” urges strong international support for negotiations between the Venezuelan authoritarian government and the democratic opposition.

The report, authored by Abraham F. Lowenthal, a leading scholar of democratic transitions, discusses the importance of the recently resumed negotiations in Mexico City for resolving Venezuela’s prolonged political crisis and addressing the human rights and economic conditions that have led to the region’s worst migration crisis in modern history.

“The talks and potential agreements are unlikely to produce a rapid transfer of power,” Lowenthal writes, but they could improve the daily lives of millions of Venezuelans and begin rebuilding the country’s fractured institutions.

This is the latest report from the Wilson Center’s Venezuela Working Group, a diverse collection of experts, including scholars and former senior government officials from several countries. The group issued its first major report in November 2021, “Democratization in Venezuela: Thoughts on a New Path,” by Michael Penfold, a prominent Venezuelan political scientist and Wilson Center global fellow.