Skip to main content
Support
Explore More
Close
Event
Gender Equality
Women Behind the Scenes: How Modernity is Catching on Before Law in the United Arab Emirates
On Friday, February 3, 2017 at 1:30 – 2:30 ET
Share on FacebookShare on TwitterShare via Email
Share
Publication

Women Behind the Scenes: How Modernity is Catching on Before Law in the United Arab Emirates 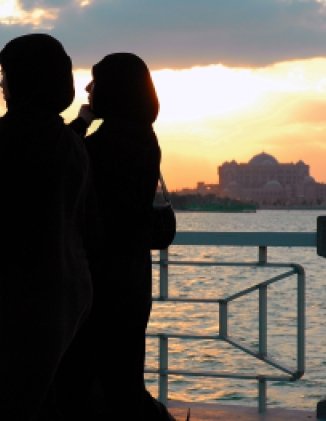 Through the Delphi method, this paper offers a new perspective from the voices of Emirati women in politics, policy, business, and university on the status of women in their country in light of the international treaties, conventions, and laws available for women’s empowerment. Drawing on true stories from daily life, it reveals that culture in the UAE is in the process of changing. Despite criticism from some human rights organizations and UN member states with regard to the UAE’s reservations to the Convention on the Elimination of All Forms of Discrimination Against Women (CEDAW), Emirati women concede that they have made unprecedented gains ahead of some legal reforms deemed necessary by the international community for women to achieve their full rights in the country.

With eight women ministers out of 29 total cabinet members, 70 percent women university graduates, and an increasing number of women pursuing science, technology, engineering and mathematics (STEM), among other achievements, an unspoken set of cultural norms has developed in the face of restrictive family laws and traditional, and, according to some women, outmoded cultural practices. This paper examines the mechanisms by which the UAE achieved this culture change, drawing on Emiratis’ answers to the major questions of this era with regard to the global women’s movement and their position within it. Emiratis address whether there is a women’s movement in the UAE; what women leaders bring to the table; the challenges Emirati women still face; the relationship between Islam and women’s rights; and the UAE’s influence with regard to women’s rights on the region and globally.

The interviews suggest that Emirati families are naturally more inclined today to promote their daughters’ education and choice of career, husband, and other life decisions despite having restrictive laws available to them to curtail such freedoms. It concludes that these cultural changes are the side-, if not directly intended, effect of a top-down strategy by the Emirati government in which women leaders, by their very existence, make it possible for a new national identity vis-à-vis Islam to come into play. As the state embraces both women’s leadership and Shari’a, Shari’a is used less and less as a tool to restrict women’s rights, and women’s rights and the state’s religious identity are naturally de-conflicted. In a country that must navigate an Islamic identity, it may at times be beneficial to proceed first by example rather than legal reforms that appear to contradict Shari’a in order to avoid triggering backlash that could undermine progress.

These conclusions offer a new context by which to transcend the limitations of the entrenched debate within the international human rights community between cultural relativists and those who view human rights as universal. On this third path, culture transcends organically from within as a result of silent but profoundly powerful example, and in the context of Muslim societies, modernity – or women’s liberation – no longer holds dramatic consequences for relations between the sexes.

Finally, the case of the UAE provokes an interesting question about definitions of democratic governance and democracy’s relationship to women’s empowerment and freedom. In comparing the UAE to the United States, for example, the paper’s findings reveal that, as with legal reform, women are only truly empowered when there is a change in culture and consciousness within a society, regardless of whether its government is labeled a “democracy” or an absolute monarchy. It is the putting into practice of the principles of democracy, rather than merely its procedural elements such as elections by majority, that leads to progress.

Women Behind the Scenes by The Wilson Center on Scribd