Working Together: Economic Ties between the United States and Mexico 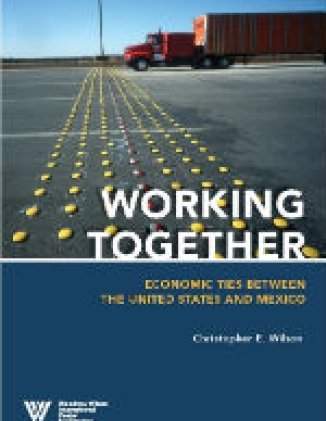 The Mexico Institute is pleased to present its newest publication, Working Together: Economic Ties between the United States and Mexico. The report looks at the ways in which regional economic cooperation can enhance competitiveness, stimulate growth and create jobs.

Mexico already buys more U.S. products than any other nation except Canada, but more than just an export market, Mexico and the United States are partners in manufacturing. Through a process known as production sharing, the two countries actually work together to build products. Imports from Mexico are therefore unlike imports from any extra-continental partner in the way they support U.S. jobs and exports. A full 40% of the content in U.S. imports from Mexico is actually produced in the United States (See page 17 of the report). This means that forty cents of every dollar spent on imports from Mexico comes back to the U.S., a quantity ten times greater than the four cents returning for each dollar paid on Chinese imports.

There is no doubt that the economies of the United States and Mexico are facing serious challenges. While some of the risk is due to external pressures, whether increasing competition from Asia or fears of crisis in Europe, much of the solution lies in strengthening regional competitiveness. The path forward, then, must be based in a clear understanding that the United States and Mexico are ultimately partners rather than competitors.

Investment: U.S. investment in Mexico has grown nearly six-fold since NAFTA was put in place, but the story of Mexico’s burgeoning investments in the United States is less understood. Though still a fraction of the size of U.S. investment in Mexico, Mexican companies have increased their FDI holdings in the U.S. from $1.2 billion in 1993 to $12.6 billion in 2010. The report explores the U.S. investments and job creation of some of Mexico’s largest companies, including Cemex, Bimbo, América Móvil, Lala, Gruma, and others.

Jobs and Trade, a State-by-State approach: This report provides a comprehensive look at the value, composition, and effects of each state’s trade with Mexico.