Research Series: The Long-Term Impact of Violence against Women and New Approaches to Addressing It

Intrafamily violence is widespread in the region, affecting between 14 and 38 percent of all women throughout their lifetime.

VIOLENCE AGAINST WOMEN is one of the world’s greatest public health problems and one of Latin America’s major development challenges. Intrafamily violence is widespread in the region, affecting between 14 and 38 percent of all women throughout their lifetime. A series of studies commissioned by the Wilson Center and supported by the Inter-American Development Bank have begun to shed new light on the complex nature of this violence. Together, they contribute to evidence-based policy recommendations that could prevent the incidence of intrafamily violence and reduce the risks of future criminal behavior by affected children as they grow up. 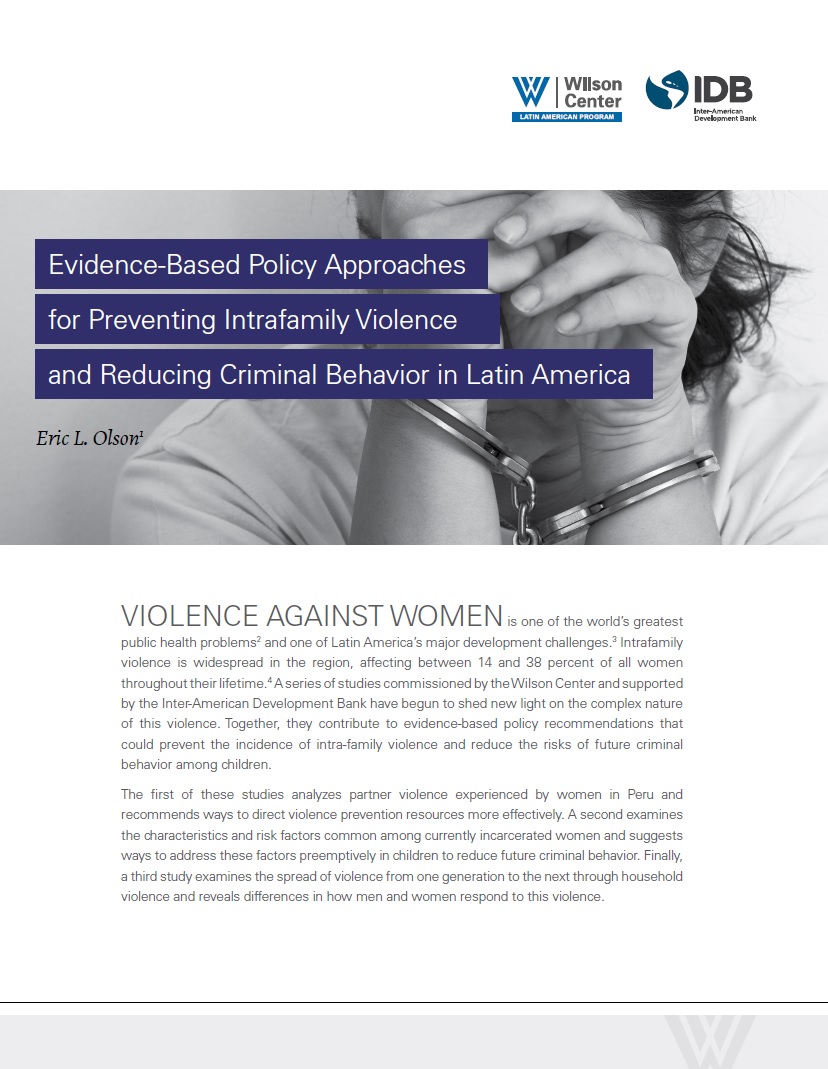 Prevalence of Violence against Women among Peruvian Ethnic Groups

About half of Peruvian women between the ages of 15 and 49 have experienced some form of violence from their partners. Through a quantitative analysis, this report explores how violence rates against women vary by ethnic group and over time. Based on a nationally representative sample of more than 75,000 women surveyed between 2003 and 2012 and a review of the literature on ethnic classification in Peru, a typology was used to measure ethnicity based on women’s linguistic backgrounds, allowing for a consistent ethnic characterization throughout the period of analysis. Learn more and download the full report 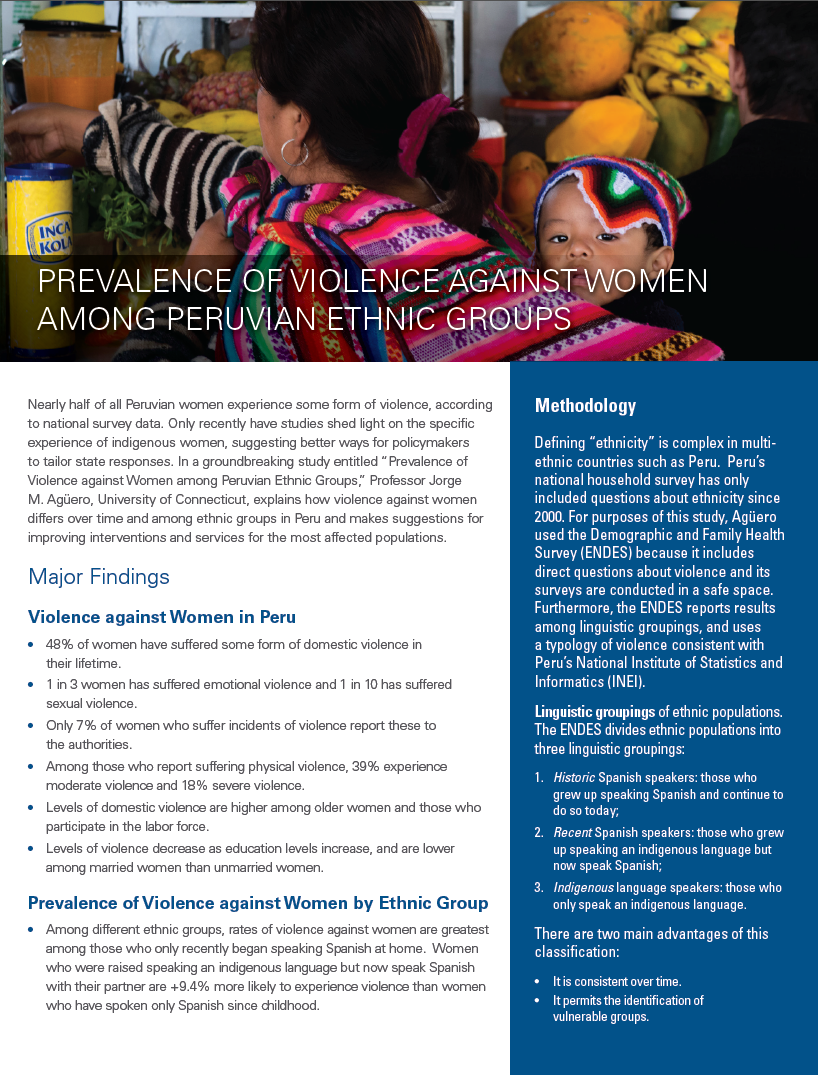 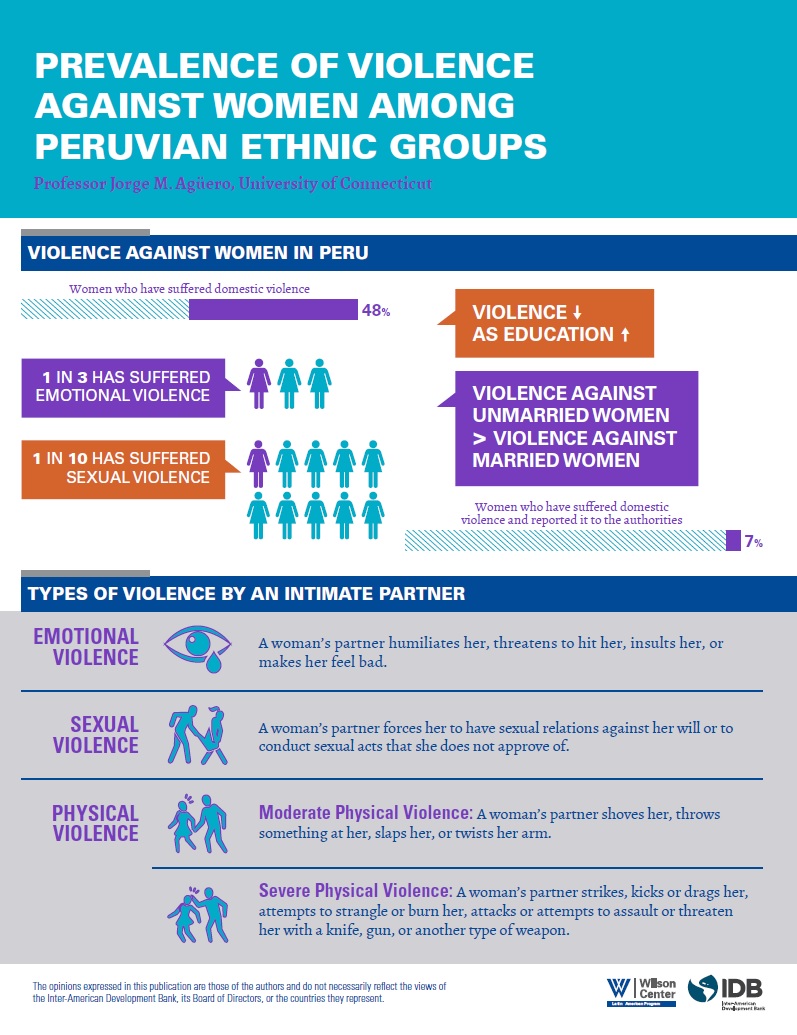 Based on an analysis of the Survey of Convicted Prisoners from eight Latin American countries, this document helps to expand knowledge about incarcerated women. First, the results of the descriptive study highlight gender differences in criminal behavior and levels of social exclusion that predate imprisonment. Women commit less violent and less aggressive crimes, have shorter criminal histories, and are more likely to commit a crime while accompanied, emphasizing the importance of women’s dependency on male figures. Learn more and download the full report 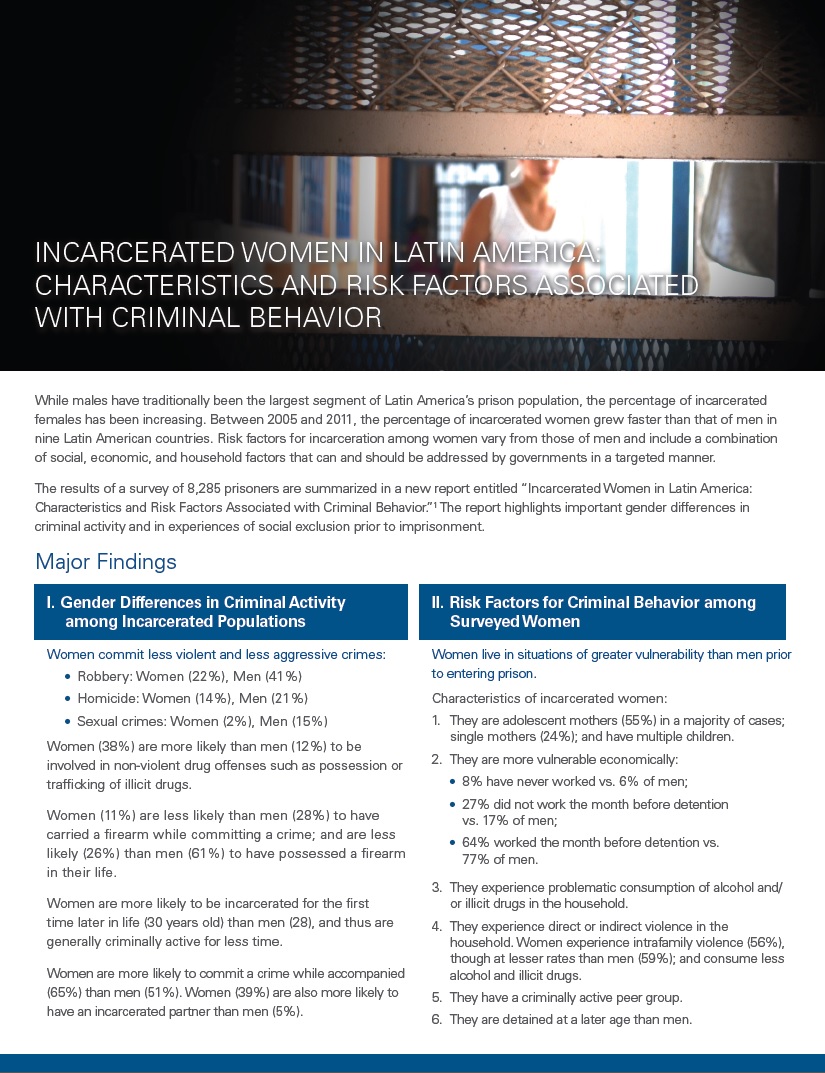 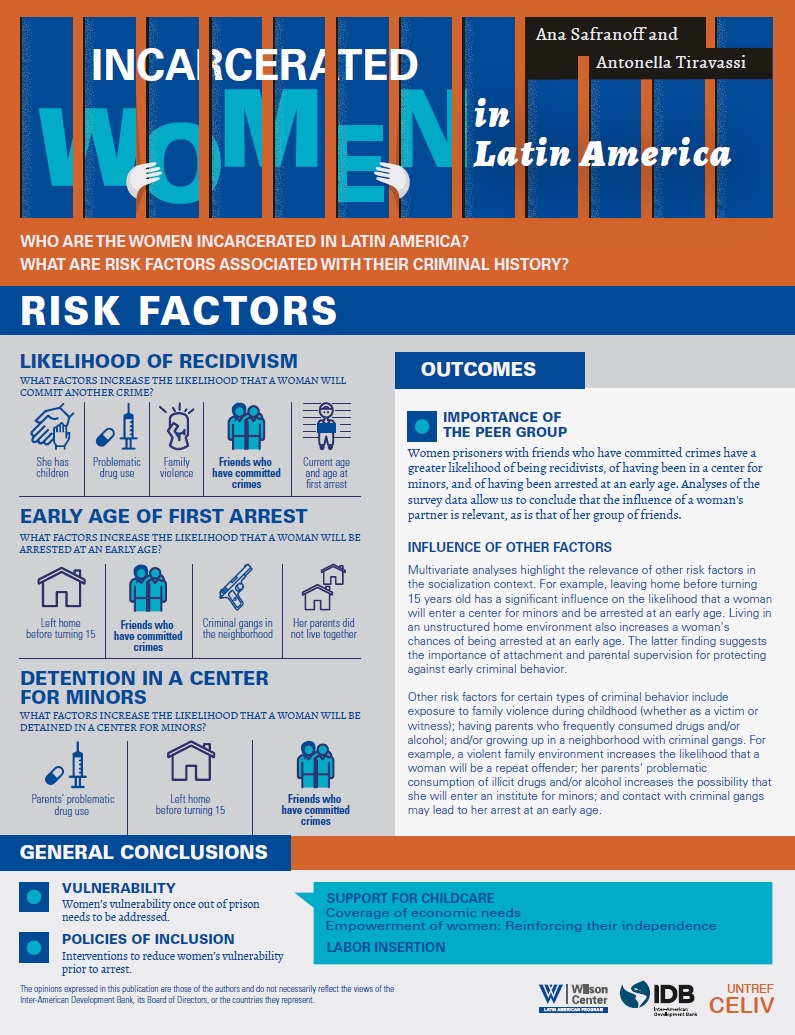 The Intergenerational Transmission of Violence: Testimonials from Prison

This article, based on an analysis of the Survey of Convicted Prisoners from eight Latin American countries, helps to expand knowledge about the association between victimization in childhood and the criminal behavior of individuals who have been incarcerated. The results of the multivariate regression models show that having grown up in a home in which the father/partner beat the mother (indirect violence) mainly affects women when it comes to future criminal behavior (both their likelihood of being repeat offenders and of having possessed firearms). Learn more and download the full report 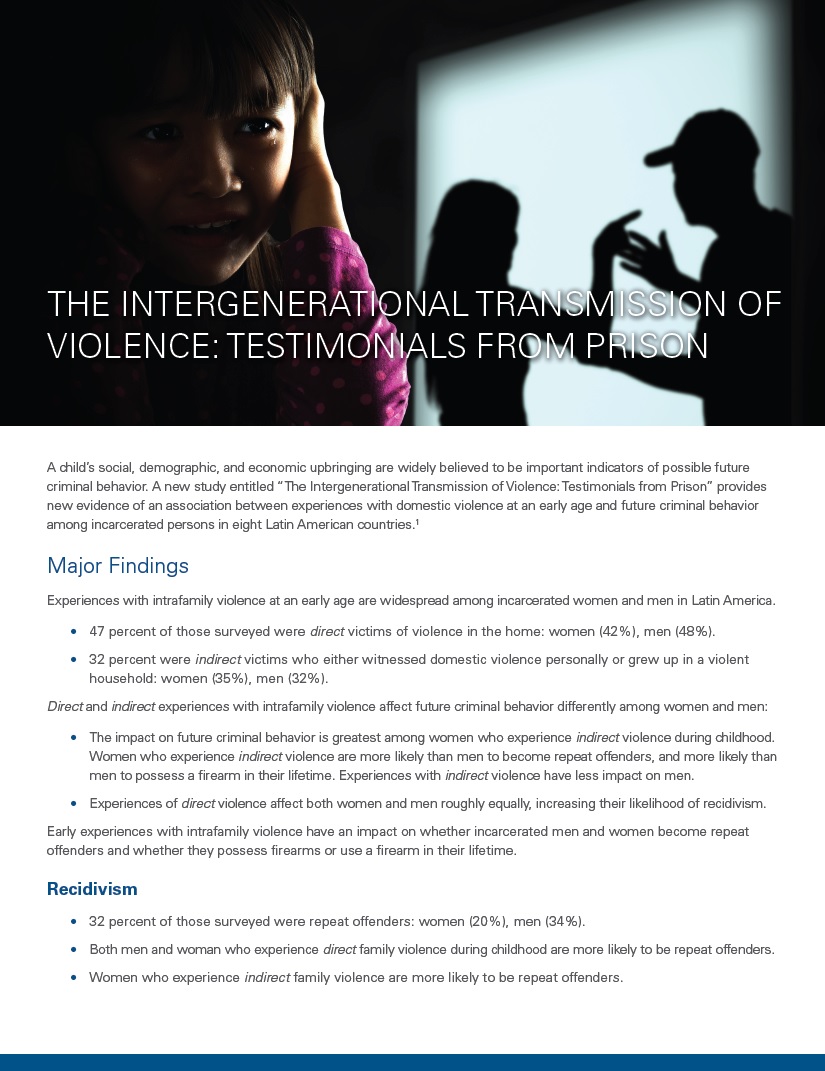 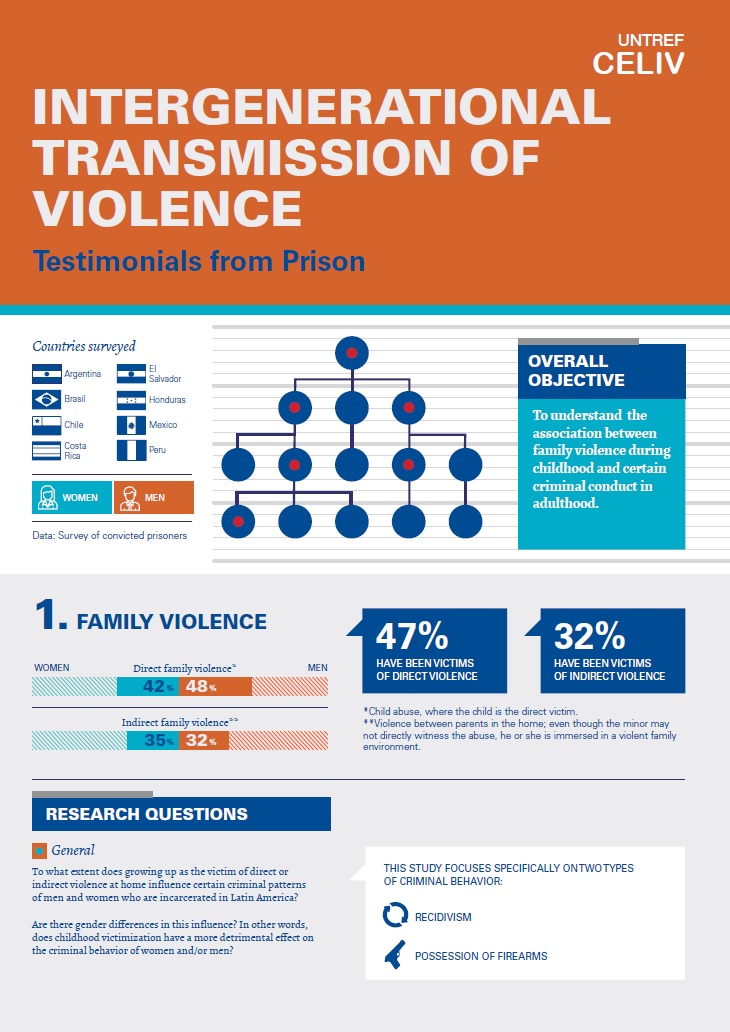 Women’s Justice Centers in Mexico are the result of the federal government, states, and civil society organizations joining forces and pooling resources to build spaces that provide the multidisciplinary services under a single roof: psychological, legal, and medical services; temporary housing; a playroom with experts in child development; and social and economic empowerment workshops to help women break the cycle of violence. Learn more and download the full report

Violence against women and girls (VAWG) is high­ly prevalent in Haiti and constitutes a serious public health problem. Social norms promoting power imbalance between women and men and condoning VAWG are also widespread. Changing these norms and curbing the cycle of VAWG in Haiti is an important step toward ensuring healthier, more productive, and safer communities in Haiti. This report documents the lessons learned from a review of the planning, implementation, and evaluation of community mobilization interventions concerning VAWG in Haiti, namely the SASA! program by Raising Voices and the Power to Girls program by Beyond Borders. Learn more and download the full report

Prevalence of Violence against Women among Different Ethnic Groups in Peru

The Intergenerational Transmission of Violence: Testimonials from Prison