In May, U.S. and coalition airstrikes against the Islamic State – also known as ISIS, ISIL, or Daesh – declined slightly in Iraq and increased in Syria compared to the previous month. The United States and its partners conducted 504 airstrikes in Iraq and 156 airstrikes in Syria.

In Iraq, the U.S.-led coalition primarily struck in and around Mosul, a key stronghold held by ISIS since June 2014. More than 130 airstrikes targeted Mosul in May – around 26 percent of the total in Iraq that month. Meanwhile, a series of ISIS bombings in Baghdad killed at least 100 civilians on May 11. The attacks could be intended to divert Iraqi forces away from Mosul, according to Gen. Joseph Votel, commander of U.S. Central Command. “They are looking for ways to start to regain their momentum or regain the initiative,” he told reporters on May 18.

Another key area of focus was Fallujah, where the U.S.-led coalition conducted 77 airstrikes in May - a 43 percent increase compared to April. On May 23, Iraqi forces advanced on the city, which ISIS has held since 2014. Additionally, Iraqi security forces, aided by U.S. airstrikes, recaptured the town of Rutbah from ISIS on May 20. “Although a small town, Rutbah has outsized strategic value” due to its location on the main route between Amman and Baghdad, Operation Inherent Resolve spokesman Col. Steve Warren said on May 18. The U.S.-led coalition conducted nine airstrikes on Rutbah in May.

In Syria, the most frequent target of U.S. and coalition airstrikes was Mar’a, north of Aleppo, with 49 airstrikes in May. Opposition forces seized five villages in the area from ISIS, but Mar’a and its surrounding area remained contested, according to Col. Warren. Additionally, around a quarter of the strikes in Syria targeted Manbij near the Turkish border. U.S.-backed forces launched an offensive to recapture Manbij on May 31, a town ISIS has used to facilitate the influx of foreign fighters from Europe.

The coalition also conducted 21 airstrikes in and around Raqqa, ISIS’s de facto capital. On May 24, Kurdish forces launched an offensive on territory north of Raqqa, though they did not attempt to recapture the city itself.

The following graphics illustrate key data points and trends in the air campaign as of May 2016.

TRENDS IN MAY: The U.S.-led coalition conducted 8 percent fewer airstrikes in Iraq and 5 percent more airstrikes in Syria compared to the previous month. 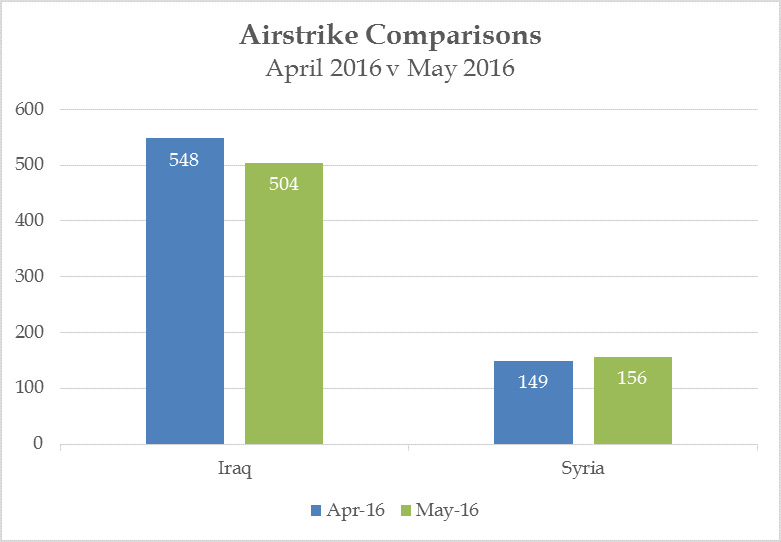 COMPARATIVE TRENDS: The U.S.-led coalition conducted three times more airstrikes in Iraq than in Syria in May, a trend that has held relatively steady for the last several months. U.S. officials have attributed the high tempo of airstrikes in Iraq to better intelligence on the ground. 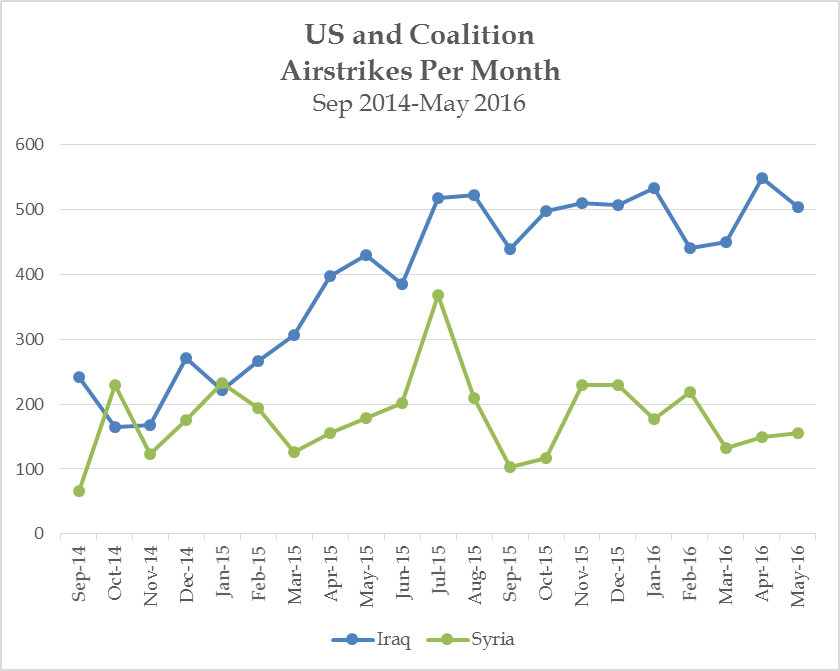 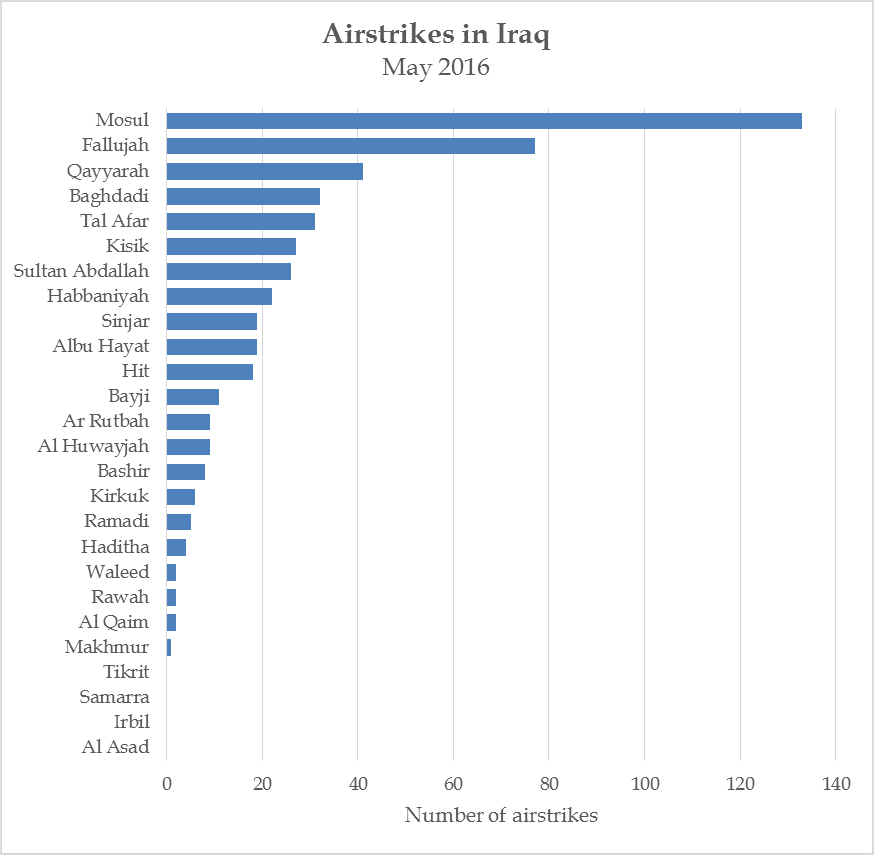 TRENDS IN SYRIA: As in April, Mar'a, Manbij, and Raqqa were the most frequent targets of U.S. and coalition airstrikes in May. The U.S.-led coalition conducted 49 airstrikes on Mar’a, near Aleppo, accounting for around 31 percent of the total in Syria. 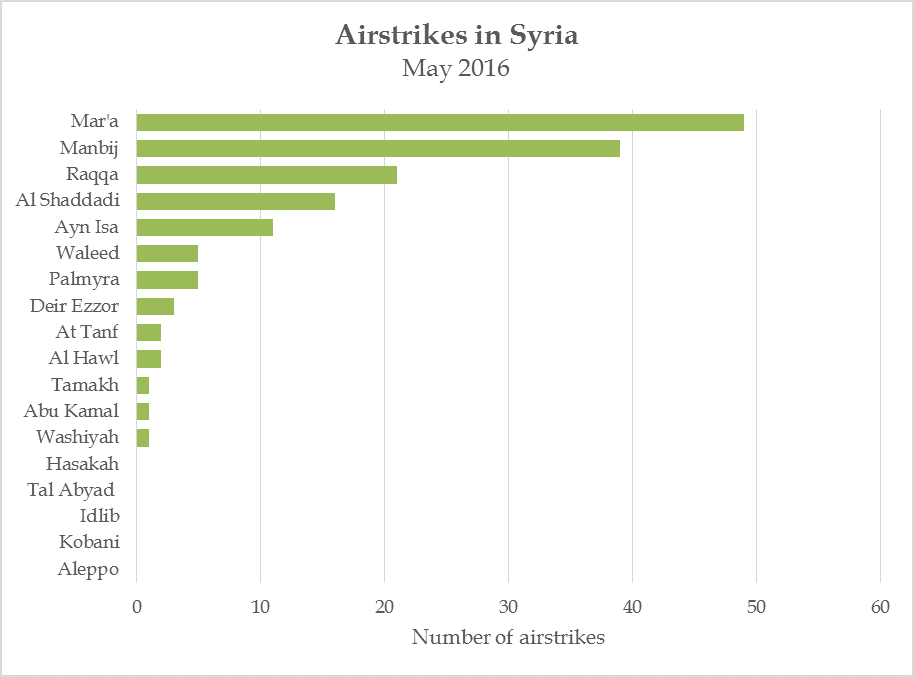 ON THE MAP: This map illustrates the airstrikes by location and concentration.

U.S./COALITION AIRSTRIKES: Between August 2014 and May 2016, the United States conducted 76 percent of the airstrikes in Iraq and Syria. Coalition partners conducted the remaining 24 percent. The ratio has remained fairly consistent throughout the campaign. 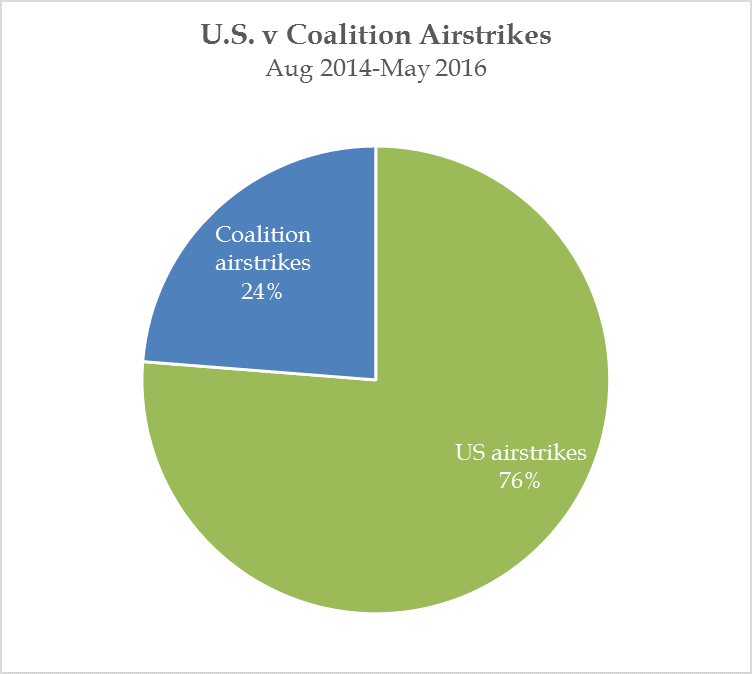 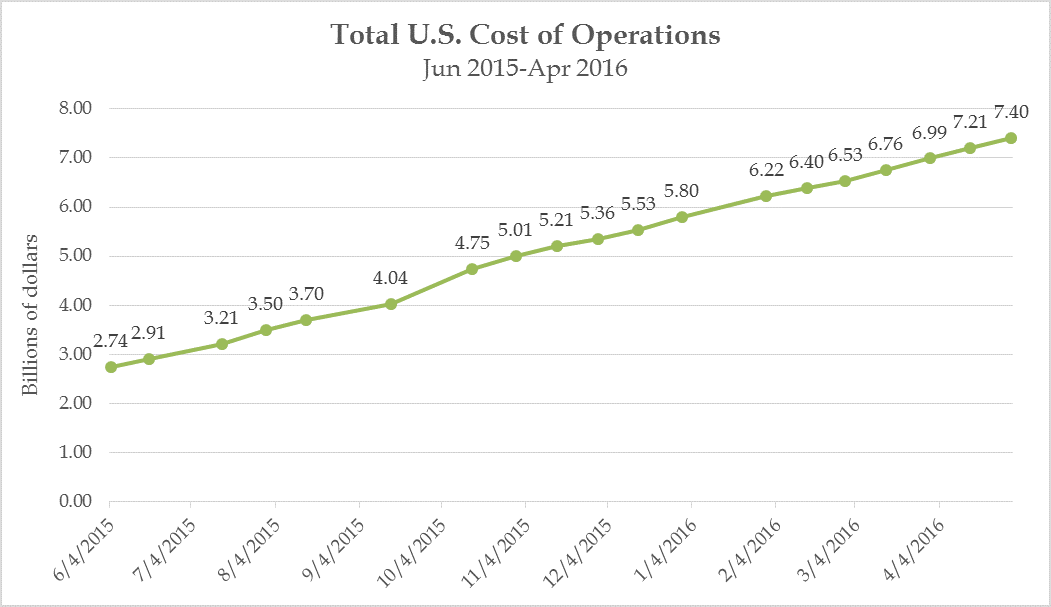 *Figures for May not yet available