As negotiations reach the go/no go point for a revised North American Free Trade Agreement (NAFTA), President Trump should recognize the agreement’s impact on one of his top priorities: U.S. energy dominance.

As negotiations reach the go/no go point for a revised North American Free Trade Agreement (NAFTA), President Trump should recognize the agreement’s impact on one of his top priorities: U.S. energy dominance.  While the United States has been strengthening its domestic energy sector, Mexico and Canada have become our two most important energy partners.  Securing and expanding those partnerships benefits the U.S. economically, and enhances America’s national security posture as well.  An updated NAFTA that facilitates energy investment and preserves investor protections would give America the double victory of boosting energy security, while maintaining advantage over geopolitical rivals like China and Russia.

Energy trade and production have flourished under NAFTA.  Private sector trade, innovation, and investment have created a North American energy market that is highly interdependent and multidirectional.  Experts argue that North America’s energy cooperation under NAFTA could take us toward liquid fuels self-sufficiency as early as 2020 and the “energy dominance” sought in President Trump’s 2017 National Security Strategy.  The United States, Mexico, and Canada represent 20 percent of global oil and gas supply, as well as 20-25 percent of the expected additions to international supply over the next 25 years.  Deepened energy cooperation gives North America an industrial advantage via low priced and plentiful energy as well.  Failure to conclude a modern NAFTA could cause major damage in the energy sector and to North American energy independence.

The U.S. Natural Gas Act requires a free trade agreement, such as NAFTA, to be in place for automatic U.S. natural gas exports to another country.  Exports to our neighbors have grown accordingly – Canada and Mexico are America’s top two export markets in crude oil and natural gas respectively.  Their energy markets, integrated by NAFTA, promote production and investment in the United States.  U.S. net energy imports have fallen to roughly a third of their levels during the mid-2000s, and the United States moved from an energy trade deficit with Mexico to a surplus.  Without increased energy exports, two Federal Reserve economists estimate that the U.S. trade deficit would be as much as 35 percent higher.  Expanded U.S. energy exports and reinforced cooperation with strong NAFTA terms could improve the trade balance even further and encourage more energy investment and production across the region. While the administration in particular should welcome this trend, threats to withdraw from NAFTA could jeopardize U.S. natural gas exports.

Particularly with Mexican elections coming on July 1, an updated NAFTA would help safeguard energy reforms from political fluctuations.  Mexico’s presidential front-runner, Andrés Manuel López Obrador (AMLO), has long criticized his country's 2013 energy reforms.  Recently, he announced that, if elected, he would seek to stop upcoming exploration auctions, reduce the sale of Mexican crude oil abroad (which would presumably include sales to U.S. refineries), shift investment from exploration to building new refineries, and freeze domestic gasoline prices for three years.  Mexico’s energy reforms can be improved, as a new study by the Wilson Center’s Mexico Institute argues.  However, the kinds of policy shifts raised by AMLO could hurt all three North American countries – they could undermine desperately needed modernization of Mexico’s energy sector, limit opportunities for U.S. firms to invest, and stymie the cross-continental cooperation that enhances energy security for the entire continent.

The Mexican energy opportunities have naturally piqued the interest of U.S. rivals like Russia and China, who seek to expand their influence in the region.  China in particular has signaled clear interest in expanding its economic presence in Mexico.  Two Mexican offshore auction blocks that China won in December 2016 stand just miles away from the U.S. maritime border.  Weakening investor protections or withdrawing from NAFTA would hurt U.S. investment and tempt Mexico to turn to U.S. competitors. We can see in Venezuela what Russian and Chinese influence can produce by propping up President Nicolas Maduro’s authoritarian government.

Finally, a revitalized NAFTA should retain the investor-state dispute settlement (ISDS) mechanism to ensure fair treatment of U.S. investment abroad, as American business groups wrote President Trump on May 2.  This is especially important for U.S. companies that already have won contracts in Mexico.  While critics have expressed concerns about the ISDS and U.S. sovereignty, the United States has not lost an ISDS case under NAFTA.  Maintaining the current ISDS mechanism will facilitate investment and let the United States take full advantage of opportunities in Mexico without losing out, economically or geopolitically, to China or other global competitors.  An updated NAFTA should also avoid a “sunset” clause that would risk termination of the agreement every five years.  Such a clause would pose a serious burden for U.S. companies building cross-continental relationships that support U.S. prosperity.

Energy is a cornerstone of the U.S. economy, supporting over 10 million jobs and contributing almost 8 percent of the GDP.  An updated NAFTA that facilitates energy trade and investment will strengthen America’s energy security.  It will also build stronger ties with our two neighbors, who are essential for our security and prosperity.  In a new era of great power competition, the United States cannot afford to take a back seat on energy trade in its own neighborhood.

Earl Anthony Wayne is a Public Policy Fellow at the Wilson Center. Wayne served as a U.S. diplomat for 40 years including as Ambassador to Mexico and Assistant Secretary of State for Economic and Business Affairs.

David R. Shedd, a former acting director of the Defense Intelligence Agency, is a visiting distinguished fellow in the Heritage Foundation’s Davis Institute for National Security, and a member of the Board of Advisors to Beacon Global Strategies.

This article was originally published on Forbes.com. 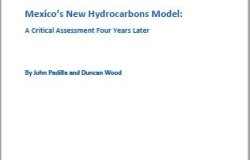