AUKUS - Winners and Losers of the Trilateral Defense Technical Agreement

By Diana Villiers Negroponte on September 17, 2021

Bi-partisan applause arose in the House of Commons as members of parliament (MPs) rejoiced in the announcement of an enhanced defense agreement to share nuclear propulsion technology with the United States and Australia and build new attack submarines for the Royal Australian Navy. The agreement, known as AUKUS presented the United Kingdom (UK) with the opportunity to demonstrate that it had “become truly a world power” operating on the world stage. It further built upon the Integrated Review of March 2021, calling for a Global Britain capable of projecting power in multiple theatres. However, we ask whether this tilt to the Indo-Pacific presents a real opportunity for Prime Minister, Boris Johnson to show off his ambitious national goals, or a distraction from his stated primary defense goals for the UK in NATO and in Europe?

At Prime Minister’s Question Time on 16 September, Johnson responded that the UK remained committed to the transatlantic alliance and defense of Europe, but now added a ‘tilt to the Indo-Pacific’ by strengthening the development of joint defense capabilities. He stressed that the purpose of AUKUS was the defense of nations sharing common values in democracy and rule of law, but the subtext was a counter-weight to China. In responding to questions on how the three partners might respond to an attack on Taiwan, the PM was vague, saying that “we shall defend our laws.” Left unanswered was whether the UK might be asked to defend Taiwan, alongside the Americans and Australians? If so, the partnership represents UK overreach.

The applause from parliamentarians came from members who understood the upside for the British defense industry in the design and production of parts for Australian nuclear powered submarines. According to Scott Morrison, the Australian Prime Minister, the submarines will be assembled in Adelaide, but the potential design and high tech digital trade brightened prospects for high skilled and high wage jobs in those parts of the UK, which have struggled to compete in sophisticated technology industries. Furthermore, the prospect of both defense and digital trade in the Indo-Pacific strengthened the UK’s status as a dialogue partner in the Comprehensive & Progressive Agreement on Trans-Pacific Partnership (CPTPP). Only the day before and for the first time, the UK had joined the CPTPP in virtual talks to discuss deepening trade. The UK’s Trade Secretary was also negotiating a new free trade agreement with both New Zealand and Australia, suggesting concentrated attention to relations with Commonwealth nations in the South Pacific. Johnson might have to wait 18 months as AUKUS partners carry out their feasibility study for the production of the new subs, but meanwhile, bilateral UK trade and commerce should flourish in that part of the world. The only caveat was the absence of a firm timeframe for delivery of the submarines. Could that signal problems that the Australian government had suffered in its 5 year negotiations with the French government?

Building upon the UK’s £24 billion defense budget - approximating 2.29 percent of GDP - AUKUS has the potential to bring well-paid jobs to the currently underserved northern and north-western regions of the UK. Beyond the design and production of parts for the nuclear powered submarines, AUKUS promises shared knowledge on cyber, artificial intelligence, quantum computing, undersea technology, and other cutting-edge sciences. Furthermore, Boris Johnson, ever aware of his need to keep the Northern Irish parliamentarians by his side on Brexit, also offered the prospect of jobs in the ship building yards of Belfast.

Beyond the UK, international winners in the AUKUS agreement include members of a strengthened 5 Eyes (intelligence sharing among the US, UK, Australia, New Zealand and Canada). Nevertheless, New Zealand’s Prime Minister continued her nation’s traditional policy of refusing to allow nuclear propelled or weaponized submarines to enter sovereign waters or visit national ports. The second winner was the British reiteration of the Five-Power Defense Agreements of 1971 which defends independent Singapore and Malaysia following the withdrawal of British forces east of Suez. It now establishes a set of exercises that occur on a regular basis, and remains the longest standing multilateral security arrangement in Southeast Asia today.

The big loser is the French government, which since 2016 had been negotiating with Australia for the production of a conventional Australian submarine to replace its diesel-electric vessels. Claiming to have learned about AUKUS partnership through the media and facing the loss of a 90 billion Euro contract, President Macron of France was furious. He instructed the French Ambassador to the United States to cancel the following day’s reception celebrating US-French naval collaboration. Taking note of the AUKUS announcement, France’s ministers for Europe, Foreign Affairs and Defense all declared that the partnership was contrary to the spirit of cooperation in high-level defense, industrial and technological bases. Also, excluding France in a future crisis situation in the Indo-Pacific region demonstrated Australian “lack of coherence.” Unstated, but inferred was the application of this criticism to the two other partners. The way out of this dilemma is to expand the AUKUS partnership to include other European and Asian partners who seek to contribute their technology and industrial productive capacity to Australian submarines and related defense products. The Quad and AUKUS need not be the only means of tilting toward the Indo-Pacific. 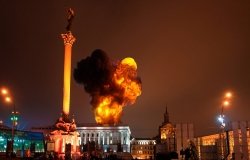