On May 19, Rached Ghannouchi, leader of Tunisia's Islamist Ennahda party, announced that the party would move away from the label "political Islam." In an interview with Le Monde, he said that “We are Muslim democrats who no longer claim political Islam." Ghannouchi said that the shift reflects Tunisia’s successful democratic transition, but he also cited the need to distance the party from extremist groups.

Ennahda hosted its tenth National Party Conference in Rades, Tunisia from May 20-25. On its official facebook page, the party noted that the conference “takes place in a context of evolution for Ennahda Party, by which it is renewing its vision and program to strengthen its identity as an open, democratic political party based on Islamic values.” In a speech during the conference, Ghannouchi reiterated the need to distance the party from political Islam, emphasizing that the decision was not "a sudden decision or a capitulation to temporary pressures." Ghannouchi was re-elected as the party's leader for another five-year term.

Ennahda emerged as a force in Tunisian politics after the Arab Spring protests of 2011, winning a plurality of votes in the 2011 parliamentary elections. When Tunisians went to the polls in 2014, Ennahda came in second to the secular Nidaa Tounes party. But in January 2016, Ennahda once again became the largest bloc in parliament after several members of Nidaa Tounes resigned over internal divisions. The following are excerpts from Ghannouchi’s interview with Le Monde, followed by excerpts from his speech at the party conference. 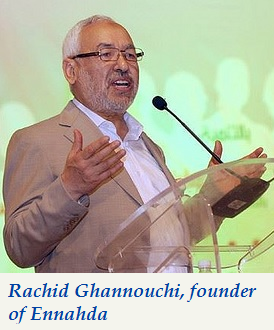 “Ennahda is a political, democratic, and civil party based on Muslim and modern civilizational values. This basis is the one found in the 2014 Constitution that reflects this mixed, dual understanding of modernity and identity. We are moving towards a party that specializes solely in political activities.”

“We need to specify the difference between political activities and religious activities. The place for political activities is not in the mosque. The mosque is a place for people to come together, so there is no reason to use it for the activities of a sole party. We want religion to be a source of unity for Tunisians, not a division. For that reason, we don’t want an imam to lead, or even be a member of, any political party. We want a party that talks about day-to-day problems, about the lives of families and individuals, and not a party that speaks to them about final judgment, paradise, etc. We want religious activity completely separate from political activity. This is very good for politics because, in this way, they can no longer be accused of manipulating religion for political ends. And this is very good also for religion so that it is not hostage to politics, manipulated by politics.”

“We believe that political Islam, although we have a certain reservation about this Western term, was a reaction to two things. First against dictatorship. Then against secular extremism. The 2011 revolution brought to an end not only the dictatorship, but also secular extremism. Tunisia now lives in democracy. The 2014 constitution imposed the same limits on secular extremism as religious extremism. There is no longer justification for political Islam in Tunisia. Moreover, this concept of political Islam was disfigured by extremism employed by al Qaeda and Daesh. Hence the need to clearly show the difference between the Muslim democracy that we claim and jihadist extremist Islam that we want to distance from even further.”

“We are learning to manage divergent interests, especially in a country like ours that has for a long time known monopolies on political decision making. We therefore need to learn how to coexist, to live with differences.”

“Even during the most difficult periods of secret activity and police harassment under dictatorship, our Movement was committed to holding its national conferences regularly, as a way of evaluating and reforming its path, reviewing its policies, and renewing its leadership. I do not believe that there is another party in the country, despite the great number of parties that is holding its tenth party conference – which means that you are the oldest amongst political parties. Our first conference was held in 1979 – which means that in a period of around a third of a century, ten conferences were held – that is an average of one conference every less than four years. That is an expression of the fact that Ennahdha is run by institutions, by democracy, by consultation – an important Islamic value.”

“As I renew Ennahdha’s wholehearted support for the policy of consensus, I say today to those who seek political gain through hostility to Ennahdha: Do not divide our country. Our hands are stretched out to everyone; the system of consensus accommodates everyone; Tunisia’s ship can only sail safely if it carries all Tunisians.

"In this context, I would like to commend members of the outgoing Consultative Council of the Party, and Ennahdha members of the National Constituent Assembly who facilitated Tunisia’s path towards social peace and consensus through their difficult and wise decisions: when they chose to preserve the first article of the Constitution of 1959, when they voted against the political exclusion law, and when they approved the national dialogue roadmap. Thus they proved that Ennahdha is a national party that places Tunisia’s interest above its own. And when we were discussing stepping down from legitimate elected government, we repeatedly said: We may lose power, but Tunisia will win.

"I am full of pride in our sons and daughters who were patient and persevered, and withstood the campaigns of doubt, demonization and provocation against their Party.

"At this sensitive juncture, I urge them to continue in the same way, for the most important thing for us, before anything else, is our country’s stability and prosperity. We stress that Ennahdha will remain a pillar of support for Tunisia’s stability. We renew our support for the government of Prime Minister Essid and our commitment to the unity of the governing coalition and to the method of consensus which created the Tunisian exception.

#Ghannouchi: We are serious and sincere in our desire to learn from our shortcomings before and after the revolution.#Ennahdha

"We, in Ennahdha, are serious and sincere in our desire to learn from our shortcomings before and after the revolution. We admit them and we humbly address them through reform. In our Conference we have an “Evaluation motion” – we are a party that evolves and reforms itself, and are not afraid to admit our mistakes.

"We are a party that never stopped evolving – from the seventies to this day - from an ideological movement engaged in the struggle for identity – when identity was under threat, to a comprehensive protest movement against an authoritarian regime, to a national democratic party devoted to reform, based on a national reference drawing from the values of Islam, committed to the articles of the Constitution and the spirit of our age, thus consolidating the clear and definitive line between Muslim democrats and extremist and violent trends that falsely attribute themselves to Islam.

"The specialization and distinction between the political and other social action is not a sudden decision or a capitulation to temporary pressures, but rather the culmination of a historical evolution in which the political field and the social, cultural and religious field were distinct in practice in our movement.

"We are keen to keep religion far from political struggles, and we call for the complete neutrality of mosques away from political disputes and partisan instrumentalisation, so that they play a role of unification rather than division.

#Ghannouchi: The specialization we are talking about is not a sudden decision or a capitulation to temporary pressures

"Yet we are astonished to see the insistence of some to exclude religion from public life, despite the fact that the leaders of the national liberation movement considered religious sentiments to be a catalyst for revolution against occupation - just as today we see the values of Islam as a catalyst for development and promoting work, sacrifice, truthfulness, and integrity, and a positive force in our war against ISIS and extremists and supporting the state’s efforts in development. Otherwise, if we do not counter ISIS – which claims to represent Islam – through using Islamic values, how can we counter it? We need scholars who champion Islamic moderation and refute extremism in the name of Islam.

"Despotic regimes disfigured Ennahdha’s relationship with the state, through repression, defamation and fear-mongering. But they have failed, by God’s Grace, to make the state and Ennahdha mutual enemies. Our experience in government after the revolution proves that Ennahdha is part of the state and a source of significant support for it. Our leaving government to promote the country’s unity proves that we are not power seekers, nor after domination nor monopoly of power.

"The Tunisian state is our ship which must carry all Tunisian men and women without any exception, exclusion of marginalization.”

#Ghannouchi: A modern state is not run through ideologies, big slogans and political wrangling, but rather through practical programs

"The solution is reconciliation between the poor and the rich, between the north and south, between cultures and civilisations, between faiths. Our world needs mutual understanding, peace, solidarity, security and tolerance.”

“Ennahdha's members, with their blood, tears and sacrifices, have gone through trials and tribulations that taught us courage to admit our errors and review our policies far from any arrogance or egoism.

"Self-criticism is a condition for evolution in the modern world, and just as we have practised it throughout our history, we will consolidate it in our Tenth Conference, for which Tunisians have many expectations.

"The success of this conference is primarily about presenting a renewed united Ennahdha that is able to participate in solving Tunisia's problems, a party of national ambition, a party of objective analysis and constructive criticism that give rise to a democratic alternative, a party that is open to its environment and to all capabilities and potential, a party that is proud of its members – women and men.”

“It is time for Tunisia's ship to leave the shore, to sail on its journey towards development and prosperity for all its people.

“By God's grace, we inaugurate this Conference, and we ask God to guide us to choose what is best for our country and our shared future.”