Skip to main content
Support
Explore More
Close
Article
Science and Technology
A Preview of Trans-Atlantic Trade and Tech Cooperation What to Expect from the TTC in France
By Melissa K. Griffith on May 13, 2022
Share on FacebookShare on TwitterShare via Email
SharePrint
Article

In 2017, from September 18 to 22, the São Paulo Research Foundation (FAPESP), the Wilson Center's Brazil Institute, the University of Nebraska–Lincoln and Texas Tech University will organize FAPESP WEEK NEBRASKA AND TEXAS. The symposium aims at strengthening the links between scientists from Brazil and United States with the objective of promoting research partnerships.

To see the full program of FAPESP Week 2017, click here.

THE BRAZIL INSTITUTE AND FAPESP

Starting in October 2011, the Brazil Institute established a partnership with the São Paulo Research Foundation (FAPESP) to promote and highlight the expanded cooperation on science and innovation between the United States and Brazil. A three day symposium was held at the Wilson Center as part of FAPESP Week, in celebration of the Foundation’s 50th anniversary. A follow up symposium titled “Brazilian Nature and Our Scientific Partnerships” took place in February 2012 at Ohio State University, in Columbus. As a result of the success of the first symposium at the Wilson Center in 2011, FAPESP and the Brazil Institute have co-sponsored FAPESP Week ever since.

FAPESP is aware that the very best research can only be done by working with the best researchers internationally. Therefore, it has established partnerships with funding agencies, higher education, private companies, and research organizations in other countries known by the quality of their research and has been encouraging scientists funded by its grants to further develop their international collaboration.

The State of São Paulo has a population of 44 million and generates 32% of Brazil’s GDP. Under the State Constitution 1% of all state taxes are appropriated to fund FAPESP, which was put in motion in 1962.

The stability of the funding and the autonomy of the foundation allow for an efficient management of the resources that has had a sizable impact: while São Paulo has 22% of the Brazilian population and over 30% of the scientists with a doctorate in the country, the state responds for 44% of the country’s scientific articles published in international journals.

Within this context, in 2016 FAPESP applied $ PPP 533.9  million in scholarships and grants.

In accordance with the Foundation’s funding objectives, 39% of expenditure was earmarked for advancing knowledge, 8% was dedicated to supporting research infrastructure and 53% was allocated to supporting application-driven research.

The University of Nebraska–Lincoln, chartered in 1869, is an educational institution of international stature. The university is a member of the Big Ten Conference and the Big Ten Academic Alliance and is classified within the Carnegie “R1: Doctoral Universities – Highest Research Activity” category. Nebraska is also a land-grant university and a member of the Association of Public and Land-grant Universities (APLU).

Always a place of high ambition, Nebraska was one of the first institutions west of the Mississippi River to award doctoral degrees—the first was granted in 1896. Now, over 25,000 students are enrolled in the university and more than 6,400 faculty and staff work to offer 183 undergraduate majors and 144 graduate degree programs across a wide range of disciplines.

Nebraska is a global leader in key areas such as food, fuel, water and rural development. The Institute of Agriculture & Natural Resources (IANR) is a key entity of the university, working through innovation in research, teaching, and extension education to ensure that Nebraska remains on the leading edge of food production and processing, human nutrition and health, environmental stewardship, entrepreneurship and economic vitality, and youth engagement.

Texas Tech University is a public research university in Lubbock, in Northwestern section of Texas. The University was created by legislative action in 1923 and has the distinction of being the largest comprehensive higher education institution in the western two-thirds of the state of Texas.

Committed to teaching and the advancement of knowledge, Texas Tech University provides the highest standards of excellence in higher education, fosters intellectual and personal development, and stimulates meaningful research and service to humankind.

Blog post
Digital Assets
Cryptocurrency as the New Frontline in the Russian Invasion of Ukraine
By Alan N. Rechtschaffen on March 1, 2022
External link
Science and Technology
Washington Post: The West has gotten savvier about Russian disinformation. Will that help Ukraine? 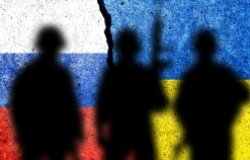 Blog post
Disaster Management
Words Versus Deeds: Russia’s and Ukraine’s Strategies in Preparing for Conflict
By Tetyana Malyarenko on February 23, 2022