Far From Accountability a Year After the Murder of Jamal Khashoggi

On the one year anniversary of the grisly murder of Jamal Khashoggi, friend and colleague David Ottaway laments the coverup of the truth.

“Sadly, one year later we are far from accountability for the grisly murder of Jamal inside the Saudi consulate in Istanbul. Crown Prince Mohammed bin Salman says he takes “full responsibility” for the “heinous crime” but insists he neither ordered it nor was aware of it beforehand. He seems to be engaged in a coverup of the truth. He has allowed the trial of eleven officials accused of carrying it out to drag on for a year with no results. He has failed to put on trial one of his closest advisors, his media czar Saud Qahtani, who is known to have issued orders to the hit squad that flew to Istanbul to kill Jamal. We don’t even know where Jamal’s remains lie. One year later, no one has been held responsible. The murder of Jamal hangs over the crown prince like a black cloud that only he can lift by revealing the whole truth.” 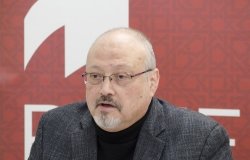