Fences of Fancy: The Refugee Crisis in Europe 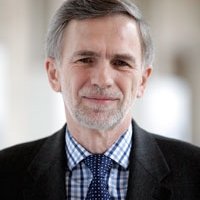 Former East European Studies scholar Tibor Purger explores the refugee crisis in Europe as it plays out on border between Serbia and Hungary.

With no fence blocking the tracks, hundreds of refugees cross the Schengen border daily walking into the EU along the railroad that links Belgrade (Serbia) and Budapest (Hungary). August 2015. Photo: Edvard Molnár (molnaredvard@gmail.com).

Seventy-one people suffocated in a Hungarian truck on an Austrian highway in late August. They were among the three hundred thousand who have found their way to the European Union this year, unlike hundreds of others who drowned off the coast of Libya. Tens of thousands more, most of them refugees from Syria, Iraq, and Afghanistan, are on their way from Turkey to Greece, then through Macedonia to Serbia, aiming at Hungary’s Schengen borders – beyond which lie more attractive destinations of northwestern Europe. Many of them left their war-torn homelands months or years ago, and the vast and persistent stream of distressed humanity has been on the move to Europe since last spring. Yet, it took months to focus international attention on the issue.

While the EU of over five hundred million people might be able financially to care for, or even economically to absorb, a million refugees, it is not prepared to do so politically, organizationally, or – most of all – culturally. To put it in perspective: the United States’ annual asylum quota (the largest in the world in absolute numbers) stands at 70,000 , but it has only accepted 1,000 Syrian refugees so far. Germany, in comparison, expects 800,000 asylum seekers this year.

The EU’s newer member states however – Bulgaria, Hungary, and Slovakia, to name a few – are especially reluctant to share the burden with their richer partners: Slovakia wants to admit “Christians only”; Bulgaria started to build a fence on its border with Turkey; and Hungary is following suit. Back in April, Viktor Orbán’s government in Budapest conducted a “national consultation on immigration and terrorism” asking citizens pointed questions like: “Do you agree with the Hungarian Government that, instead of immigration, [the State] should support Hungarian families and their future offspring?” Not surprisingly, over 93 percent chose the latter. Official parlance, including public-service media, exclusively uses the labels migrants and economicimmigrants, never the word refugees – further slanting any debate. Orbán has warned of potentially “hundreds of millions” coming from Africa that would mean “the end of Europe as we know it.” His minions compete with the extreme right in predicting not just health hazards and the breakdown of public security but also grave “cultural peril” likely to destroy “European civilization.” Hungary is the only member state to refuse any resettled or relocated asylum seekers through the EU’s voluntary quota.

But even that plan, developed by the European Commission back in the spring, only attempted to find a home, by the end of next year, for 40,000 refugees who arrived last winter. Member states underbid it by 20 percent, and have no idea how to deal with twenty times as many applicants. In the meantime, as I have observed across European borders this summer, incoming refugees secure passage by declaring their intention to file for asylum in every country they traverse – only to move on as quickly as possible, tearing up simple paper acknowledgments before they cross the next border. Most of them don’t carry any passport at all or won’t produce it in transit – rendering any screening difficult and ineffective.

Hungary’s razor-wire fence on its southern border has already proven itself useless since it can be easily lifted and climbed under, jumped over, or simply walked around. According to French Foreign Minister Laurent Fabius, it is disgraceful to European values as not even animals should be corralled like that. The Russian Ambassador to Belgrade visited the refugees gathering on the Serbian side of the fence and praised that government for refusing to wall itself in. Russia’s man in “brotherly” – and EU-candidate – Serbia, Alexander Chepurin went so far as to call the refugee crisis the “Arab Fall,” a direct consequence of the Arab Spring that was “caused by the West and is now returning to it as a boomerang.”

Boomerang or not, the Russian official seems not to be the only one to gloat over the misfortune of displaced masses and the EU’s inability to respond adequately. State-sponsored Russian propaganda portals in several East European languages preach that “the West deserves the crisis,” and that America is the source of all this evil. Many Hungarians readily believe that the U.S. created ISIS and it pays the refugees to undermine the Union. One must then wonder if those who, unlike the U.S., could actually profit from European disunity, might have something to do with the sudden swell of refugees to rush to the West by land and see.

Fences of fancy, partial attempts to wall in “European culture and civilization,” jobs, and welfare, will not suffice. European Commission President Jean-Claude Juncker has said as much in an opinion piece published in late August. But no one seems to have any better idea, and the lack of unity among EU member states makes it unlikely for one to pop up any time soon. Chancellor Angela Merkel announced Germany’s readiness to accommodate all Syrian war refugees, and U.S. President Barack Obama praised her leadership. But London calls for an end to passport-free travel in the Schengen area, and, in the wake of the truck deaths, Austria reintroduced vehicle control over road traffic from Hungary, slowing it to a crawl. Paris criticizes Budapest for inhuman treatment of refugees, while the Hungarian Parliament condemns “Brussels’ irresponsible policies,” drafts a constitutional amendment to militarize its southern border, and prepares for a state of emergency – a measure already tried and failed in Macedonia. Some national leaders are not willing to admit that the Union is all of them together, not some mysterious evil force in Brussels. It took three months for Europe to realize the critical nature of the situation, but mutual finger-pointing will not stem the flow of wretched humanity towards richer shores.

While far away, protected by two oceans and struggling with its own, mostly economic, immigration and wall-building debates in the South, the United States does have a skin in the game. The breakdown of order in the Middle East can be at least partially pegged to its 2003 invasion of Iraq. More recently, the Arab Spring was left to falter. America’s principal allies in Europe are facing unprecedented challenges that threaten, if not their culture and way of life as some may suggest, certainly their ability to act. An important American ally, Turkey, faces challenges between the European Union it is not allowed to join and the Middle East and Central Asia in turmoil. Transatlantic unity is also imperiled by Moscow so cunningly exploiting the crisis that the EU has finally decided to set up a counterpropaganda operation. But Americans have invested too much, borne sacrifices, and made enough mistakes in the region to be able to walk away from the consequences that threaten global stability. The crisis, especially its underlying causes, cannot be resolved with partial national efforts or even with strengthened European unity. It calls for strategically coordinated international action, perhaps through the UN Security Council, and for American leadership.