Honduras is a place of enormous contradictions. It is home to great beauty—beaches, mountains, wildlife, and strong and resilient people—but also to a troubling array of social, governance, and human rights challenges. Endemic corruption, extreme violence, poverty and desperation, and a weak and broken government take a toll on its people. Both a product and a symbol of broken society are the prisons, where people are warehoused, forgotten, and even dying by the scores with almost no one taking notice. Honduran citizens and authorities, alike, struggle to cope under the weight of these problems. Between May 21 and 31, Professor Guadalupe Correa-Cabrera and I struck out on our second road trip together in the last nine months. The first was to the lower Rio Grande Valley on the Texas-Mexico border where we interviewed migrants, shelter workers, government officials, researchers and scholars, and law enforcement officers about border security, migrant smuggling, and trafficking of Central Americans in that area.  On this occasion, we decided to travel to Honduras and venture across its northern coastal region to better understand the country’s security challenges and the issues driving internal displacement and migration northward. During the first week we spent time in San Pedro Sula and its surrounding communities of Choloma and Rivera Hernandez, El Progreso, which by some calculations is now the third most violent city in Honduras, and the port city of La Ceiba. We ended our journey in Tegucigalpa. Throughout the trip, we talked to community workers, young people, prisoners and prison officials, police, judges, local and national government officials, members of the Honduran Congress and opposition figures,  representatives from international organizations, foreign embassies (including that of the United States), civil society organizations, and ordinary citizens we encountered along the way. From this experience we confirmed what we already suspected—that reality is far more complex than can be summarized in a policy memo or encapsulated in a soundbite. 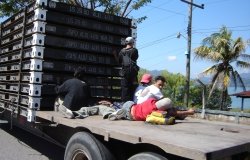