The United States and Mexico need to redouble their cooperation against organized crime in order to save lives in both countries, but hardline U.S. proposals now expected in the ongoing NAFTA renegotiation could put this vital security cooperation at risk.

The United States and Mexico need to redouble their cooperation against organized crime in order to save lives in both countries, but hardline U.S. proposals now expected in the ongoing NAFTA renegotiation could put this vital security cooperation at risk.

In the United States, Mexican-sourced drugs are fueling drug addiction and rising overdose deaths. In Mexico, the estimated $18-30 billion of drug proceeds from U.S. sales are fueling a surge in violence, increased homicides, and serious corruption. The governments of Mexico and the United States agreed this year on a strategy for more effective cooperation against illegal drugs and other cross-border crime. Further success, however, requires increased trust and political will, as well as more effective law enforcement to break up drug production and distribution chains, disrupt financial networks, and achieve more convictions, as well as better U.S. anti-addiction and rehabilitation programs.

Success in these areas will be very tough to achieve in even the best of circumstances, but it will become extraordinarily difficult if the United States endangers the commercial ties that closely link the two countries and have helped Mexico build its prosperity. The aggressive proposals from the Trump Administration on NAFTAmodernization, reportedly to be presented at this week’s negotiating round, could seriously harm Mexico’s economy and U.S.-Mexico relations.  The proposals have sparked outcries from U.S. businesses and farmers and a sharp warning from the Washington Post Editorial Board.

Mexico’s Economy and Foreign Ministers have flagged that Mexico will reconsider U.S.-Mexico cooperation on security and migration, if the United States abandons NAFTA and relations become unbalanced. This could cause real damage to U.S. communities already struggling with a growing opioid epidemic. Yet, President Trump again talked about pulling out of NAFTA this week, as negotiators are beginning their fourth round of talks.

In 2008, the United States and Mexico agreed to the joint “Merida Initiative” to attack organized crime, strengthen Mexico’s law enforcement institutions, build a 21st Century border, and help communities under siege from organized crime. U.S. assistance programs and joint work between law enforcement and security agencies have helped build capacity in Mexico, supported major reform of Mexico’s judicial system, forged closer cooperation, led to major arrests of cartel leaders, reduced border violence, and helped Mexico overcome the first surge in criminal violence which peaked in late 2011. U.S.-Mexico law enforcement and security cooperation is at the best level it has ever been, according to Mexican and U.S. officials.

Nonetheless, the improved bilateral cooperation has not been sufficient. Mexican cartels have split and proliferated, as their “capos” were taken off the field. Criminal activities and violence have spread to additional areas in Mexico and have started to resurge in the North where successes were made in 2010-12. Homicides are rising, with June 2017 being the most violent month in the last 20 years. 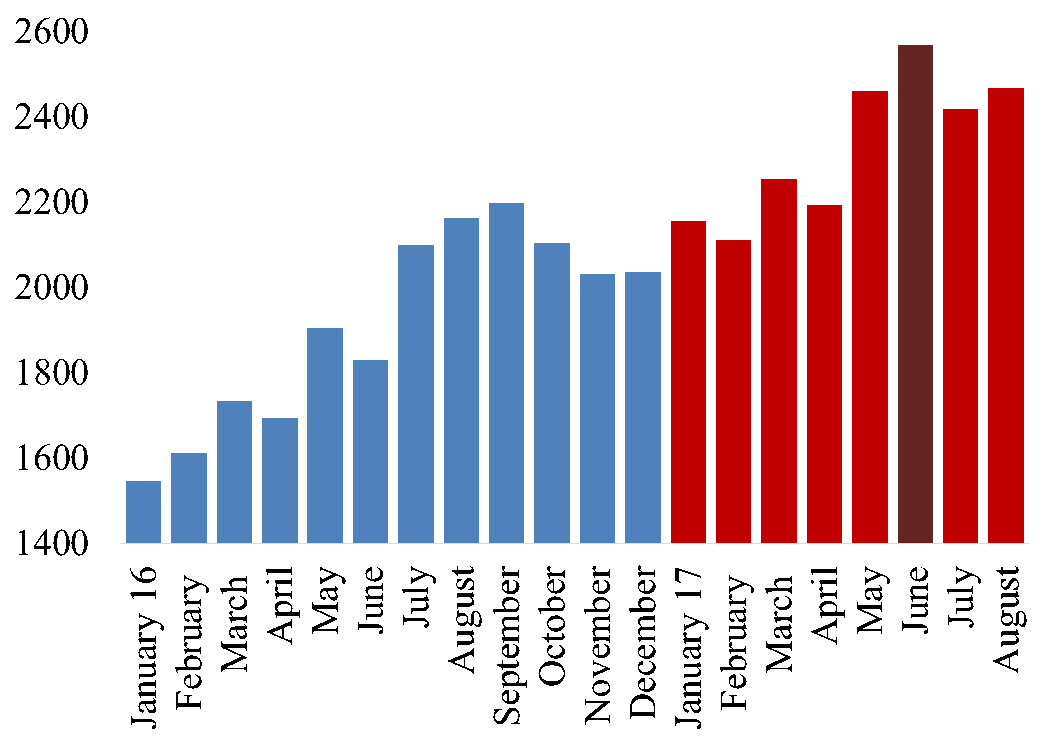 Inside the United States, more drugs are reaching communities around the country, with deaths from opioids soaring. Total U.S. overdose deaths hit 64,000 in 2016 with higher totals being predicted for 2017.  Increased illegal flows of heroin and fentanyl from Mexico are feeding the growing U.S. demand and overdose totals. President Trump’s “Commission on Combating Drug Addiction and the Opioid Crisis” recommended that he declare a national emergency.

U.S. and Mexican cabinet ministers and officials have met several times this year and agreed on a strategic plan for cooperation that will use a wide range of tools to go after criminal organizations and address U.S. demand for illicit drugs. They decided to go after all elements in the drug chain from production and distribution to finance networks and weapons procurement, and U.S. officials agreed that U.S. demand for drugs has to be reduced. Mexican and U.S. officials also decided to continue cooperation to better manage the flow of migrants, to help Central America deal with the problems that send families and children fleeing northward, and to work to identify potentially dangerous travelers from third countries.

Achieving progress on these fronts would be challenging in any situation, and especially as Mexico’s July presidential and congressional elections approach. It will be made much more difficult if the United States is perceived to be unfairly punishing Mexico in the renegotiation of NAFTA.

Mexican negative perceptions of the United States have already shot up to over 65 percent. If those negatives are further fed by additional U.S. moves on trade (or immigration), it will become much harder to sustain or deepen law enforcement cooperation.  Anti-American rhetoric would increase. U.S. actions and words could help elect a Mexican president in 2018 who is more critical of the United States.

The Mexican government has been working hard to sustain bilateral cooperation against criminal groups and on immigration, despite the negative rhetoric from Washington and souring views of the Mexican public. However, if the United States seriously insists upon approaches now being floated by the U.S. negotiators to eliminate the U.S. deficit via hardline positions in the NAFTA talks, such as a radical increase of required U.S. content for autos, this will likely be seen as an effort to attack unfairly Mexican manufacturing and reduce Mexico’s ability to raise standards of living.

U.S. business and farm groups and leaders from across the United States are sounding the alarm about the negative effects for the U.S. economy of the expected proposals from U.S. negotiators. Warning of a “grave and costly mistake,” the U.S. Chamber of Commerce has called for taking the proposals off the table, labeling them “poison pills.” Mexican and Canadian officials are signaling very serious concern, as are key Mexican senators who need to approve any deal.

If the trade talks play out badly, it could seriously impact U.S.-Mexico cooperation against crime at a time when the stage is ready for the deeper cooperation against drug smuggling that both societies need.  The United States should think strategically about U.S.-Mexico relations, as U.S. negotiators work to make NAFTA more beneficial for Americans.  Good outcomes for NAFTA’s modernization and better U.S.-Mexico anti-crime cooperation are both possible.  Americans and their government should keep in mind that the United States will suffer immensely from a less prosperous and less peaceful Mexico that is alienated from its northern neighbor.

Earl Anthony Wayne was U.S. Ambassador to Mexico, 2011-15.  A Career Ambassador, Wayne worked extensively on economic and business affairs during his 40 years in the U.S. diplomatic service.  He is a Public Policy Fellow at the Woodrow Wilson Center, among other activities. The views expressed here are solely those of the author.

This article was also published on the Mexico Institute's blog on Forbes.