By Dana Steinberg on March 2, 2011
Economics and GlobalizationCongress

The Woodrow Wilson Center continues to bring informative programming to Capitol Hill through Wilson Center on the Hill (WCOH), a nonpartisan forum funded by a grant from the William and Flora Hewlett Foundation. At the beginning of each year, WCOH sponsors a two-part series of panel discussions on key foreign policy challenges likely to confront Congress. In the latest series, seven Wilson Center directors and two senior scholars spoke to Hill staffers about issues likely to arise this year.

Both sessions were moderated by Michael Van Dusen, then-acting director of the Wilson Center. The first session, on January 28, focused on key regions such as China and Europe as well as on how immigration and urban growth affect global challenges and U.S. economic policy. The second session, on February 4, delved into U.S. development policy, U.S. nuclear nonproliferation policy, the global environment, and conflict resolution.

Global Economy
"It's virtually impossible to draw the convenient lines between what is domestic and what's international," said Kent Hughes, director of the Program on America and the Global Economy. "The reality of globalization has extended to virtually every small town in the country."

Other key trade issues include whether progress will be made on the Doha Round of multilateral trade negotiations, now nearing their 10th anniversary, and whether Japan will join negotiations for a trans-Pacific partnership, talks which began during the George W. Bush administration. Meanwhile, as much of the world continues to reel from the effects of the financial crisis, the debate over necessary financial reforms will continue.

To strengthen U.S. economic competitiveness, Sonya Michel, director of United States Studies, called for changes to U.S. migration policy that could produce a more effective, flexible workforce. She advocated an immigration model whereby immigrants who work and train in the United States can return to their homeland to bring skills and financial resources while attending to their family obligations, with the possibility of later returning to the United States.

"We should think about migration not just as a one-way street, but as a circular, ongoing, perhaps lifelong process for individuals and families as they strive to maximize their potential and opportunities in a global economy," she said.

Such a policy allows for the circular flow of highly skilled migrants as well as workers in nonprofessional services, such as childcare workers, who make it possible for Americans, especially women, to pursue their careers and contribute to economic progress. While it could bring benefits for the United States, such a policy could also help strengthen developing and emerging economies so they can be partners in trade and democracy.

Stapleton Roy, director of the Kissinger Institute on China and the United States, said, "The hard reality is that we, the United States, and the rest of the developed world are faced not with one, but with two, economic powerhouses—China and India— that are growing like gangbusters and will confront our economy and our foreign policy with a new set of challenges."

China's growth goes beyond trade and currency issues, said Roy. China has the world's largest airport, more than 5,600 miles of high-speed rail under construction while the U.S. has none, and the second-fastest supercomputer. China also replaced the United States as the world's leading high-tech exporter.

China's rapid growth, however, is exacerbating domestic social tensions, raising questions about its internal stability, said Roy. On a positive note for the United States, American exports to China are growing faster than exports to other countries, and the recent U.S.-China summit yielded potentially lucrative business deals and other bilateral agreements. Roy urged that the United States strengthen itself domestically to deal with the competition from China, India, and other rising powers.

Emphasizing new trends in global population growth, Blair Ruble, director of the Kennan Institute and the Comparative Urban Studies Project, noted that more people now live in cities than in rural areas, a trend expected to continue throughout the century.

"That profound change affects everything we do," he said. A particular challenge, he noted, is the hundreds of cities in the developing world where growth is most rapid, but attention is scant. These cities, Ruble said, will become home to more than two billion new residents over the next 20 years. Much of this growth is a result of natural population increases, not necessarily a consequence of migration. Ironically, cities increasingly continue to produce much of the world's wealth, but also produce more poverty and income inequality, as can be seen in informal settlements or slums. As Congress addresses such issues as health, terrorism, and the environment, keep in mind, he said, "the urban age is just beginning."

Samuel Wells, a Wilson Center Senior Scholar, discussed effects of the financial crisis on Europe and the implications of the Euro zone crisis for America. Although many agree the crisis began with the bursting of the American housing bubble, Wells said global factors also contributed to Europe's delay in responding to the crisis, but Europe also suffered from problems of its own. Bursting housing bubbles in Ireland and Spain, heavily indebted Portugal and Italy; and significant accounting issues in Greece were also at the root of the European crisis. In addition, the Euro zone lacks a single fiscal policy, resulting in different tax and budget structures in many countries. Highlighting the importance of Europe's struggles for the 112th Congress, Wells warned that stagnation in Europe could be a major issue for the U.S. economy.

Development and Security
At the February 4 session, Cynthia Arnson, director of the Latin American Program, began by noting some positive trends in Latin America. She said much of the region is emerging from the recession faster than nations of the developed world, and recent polling data shows overall support for democracy in Latin America is the highest it has been in a decade. Despite these trends, there is still great mistrust of democracy across Latin America. Arnson said addressing such fundamental problems as crime, unemployment, corruption, and perceived citizen insecurity would strengthen support for democracy and bolster U.S. interests in the region.

Turning to the nexus between the environment and development, Geoff Dableko, director of the Environmental Change and Security Program emphasized a diversified approach that works across communities and bureaucracies to bring in a variety of perspectives before making policy decisions. Assessing climate change, for example, could include discussions on water and food security in strategic areas. He said a discussion on biodiversity could benefit from considering trends in climate, energy, natural resources, and even trade. "You'll find some of the same mechanisms get you benefits in multiple sectors," Dabelko said. "By having this multi-dimensional understanding of the problems, we can [better] design our interventions to address the multiple underlying interconnected sets of issues."

Robert Litwak, vice president for Programs and director of International Security Studies also emphasized the need for officials to understand the broader historical and cultural context affecting policy formulation. "A view of the world or a key threshold assumption can drive policy," said Litwak. In the nuclear realm, the paradox is that the risk of nuclear war between major powers has been greatly reduced with the end of the Cold War, but the threat that an individual nuclear weapon might be used by a regional power or a terrorist group has increased significantly. The most likely scenario of terrorist acquisition, Litwak argued, is not through direct transfer from an adversarial state, like Iran, but rather through theft or "leakage" from an inadequately secured nuclear stockpile, with Pakistan being a country of particular concern.

Wilson Center Senior Scholar John Sewell discussed the potential impact of the recent Quadrennial Diplomacy and Development Review (QDDR), a recently released report designed to rethink America's diplomacy and development policies. The QDDR underlines key relationships between development and foreign policy, calling for a major restructuring of the U.S. Agency for International Development (USAID) to make it the preeminent development body in the world and a reorganization of the State Department to take on health, food, and other global issues. But the report leaves several major questions unanswered, said Sewell, such as questions of leadership, budget control, the adaptability of the State Department, congressional support, and criteria for choosing which countries to aid. Sewell recognized that the 112th Congress might not be a "propitious political climate" for the suggested reforms, but agreed with the thrust of the QDDR that USAID and State face a new set of foreign policy problems where issues of development and international aid will strongly influence how U.S. national interests are promoted.

A week later, WCOH sponsored an event on the politics of oil and its implications for U.S. energy security. Panelists, including Rep. Bobby Rush from Illinois, discussed the evolving political roller coaster in oil-producing states across the Middle East as well as the need to diversify America's energy supply to include cleaner technology and sources that make the U.S. less dependent on Persian Gulf oil. 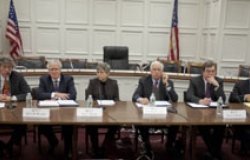