The Importance of Digital Services to the U.S. and European Economies

Global Europe Program
Science and TechnologyEconomics and GlobalizationTrade and Development

The digital economy is dominated by services, which accounted for over 90% of total U.S. digital economy current-dollar value added in 2017.[1] Two metrics offer us a clearer picture of transatlantic connections in digital services. A narrow view can be had by looking at cross-border information and communications technology (ICT) services, or digital services as shorthand, which are services used to facilitate information processing and communication.[2] A broader view can be taken by looking at digitally-enabled services: services that can be, but not necessarily are, delivered remotely over ICT networks. These include digital services as well as “activities that can be specified, performed, delivered, evaluated and consumed electronically.”[3] Identifying potentially ICT-enabled services does not tell us with certainty whether the services are actually traded digitally.[4] But the U.S. Commerce Department notes that “these service categories are the ones in which digital technologies present the most opportunity to transform the relationship between buyer and seller from the traditional in-person delivery mode to a digital one,”[5] which means a digital transaction is likely and thus can offer a rough indication of the potential for digital trade.[6]

Digitally-enabled services are not just exported directly, they are used in manufacturing and to produce goods and services for export. Over half of digitally-enabled services imported by the United States from the European Union (EU) is used to produce U.S. products for export, and vice versa, thus generating an additional value-added effect on trade that is not easily captured in standard metrics.[8] According to the OECD, the top global hubs for imports and exports of digitally deliverable services are the United States, Germany, Ireland, the Netherlands, France and the UK.[9]

European countries with the largest estimated value of digitally-enabled services exports were the UK (€261 billion), Ireland (€177 billion), Germany (€173 billion), and the Netherlands (€160 billion).

The digital economy has transformed the way trade in both goods and services is conducted across the Atlantic and around the world. Even more important, however, is the delivery of digital services by U.S. and European foreign affiliates -- another indicator reinforcing the importance of foreign direct investment, rather than trade, as the major driver of transatlantic commerce. U.S. services supplied by affiliates abroad were $1.704 trillion, roughly double global U.S. services exports of $875.83 billion. Moreover, half of all services supplied by U.S. affiliates abroad are digitally-enabled (Table 5).

The significant presence of leading U.S. service and technology leaders in Europe underscores Europe’s position as the major market for U.S. digital goods and services. Table 8 underscores this dynamic. In 2018, Europe accounted for 69% of the $289.6 billion in total global information services supplied abroad by U.S. multinational corporations through their majority-owned foreign affiliates. This is not surprising given the massive in-country presence of U.S. firms throughout Europe, with outward U.S. FDI stock in information overwhelmingly positioned in Europe. U.S. overseas direct investment in the “information” industry in the UK alone, for instance, was more than double such investment in the entire Western Hemisphere outside the United States, and 33 times such investment in China. Equivalent U.S. investment in Germany was 4 times more than in China.[14]

[2] The U.S. Bureau of Economic Analysis (BEA) defines those services as including three categories of international trade in services: telecommunications services, computer services, and charges for the use of intellectual property associated with computer software.

http://www.esa.doc.gov/economic-briefings/new-bea-estimates-international-trade-digitally-enabled-services. These products are often referred to as “digitally deliverable” (OECD-WTO-IMF, 2019[50]), meaning that they can, and are increasingly, being delivered in the form of data flows.

[6] The OECD/IMF/WTO Handbook defines digital trade as “trade that is digitally ordered and/or digitally delivered,” yet data statistics have not yet been aligned to this definition. That leaves us with digitally-enabled services as the default metric. For more, see IMF/OECD, “How to move forward on measuring digital trade,” Thirty-Second Meeting of the IMF Committee on Balance of Payments Statistics, Thimphu, Bhutan October 29–November 1, 2019, https://www.imf.org/external/pubs/ft/bop/2019/pdf/19-07.pdf; Joshua P. Meltzer, “The Importance of the Internet and Transatlantic Data Flows for U.S. and EU Trade and Investment,’’ Brookings Institution, Global Economy and Development Working Paper 79, October 2014; Ryan Noonan, ''Digitally Deliverable Services Remain an Important Component of U.S. Trade,'' Washington, DC. U.S. Department of Commerce, Economics and Statistics Administration, May 28, 2015, available at http://www.esa.gov/economic-briefings/digitally-deliverable-services-remain-important-component-us-trade.

[10] Note that data on EU28 exports and imports of services by product is not available from Eurostat for the year 2019.

[12] Note that these figures are sourced from the OECD International Trade in Services Statistics database, and can vary from the corresponding U.S.-EU bilateral trade figures reported by the U.S. Bureau of Economic Analysis. Differences can occur in how services are measured, classified, and attributed to partner countries, resulting in asymmetries in the two data sources. For more information on these asymmetries, please see Eurostat report, “Transatlantic Trade in Services: Investigating Bilateral Asymmetries in EU-US Trade Statistics, 2017 edition,” https://ec.europa.eu/eurostat/documents/7870049/8544118/KS-GQ-17-016-EN-N.pdf/eaf15b03-5dcf-48dd-976f-7b4169f08a9e.

[14] While affiliate sales are a more important means of delivery for digital services and digitally-enabled services than cross-border trade, the two modes of delivery are more complements than substitutes, since foreign investment and affiliate sales increasingly drive transatlantic trade flows. The fact that digital services and digitally-enabled services are following this same broad pattern of transatlantic commercial flows reinforces our point that intra-firm trade is critical to the transatlantic economy. 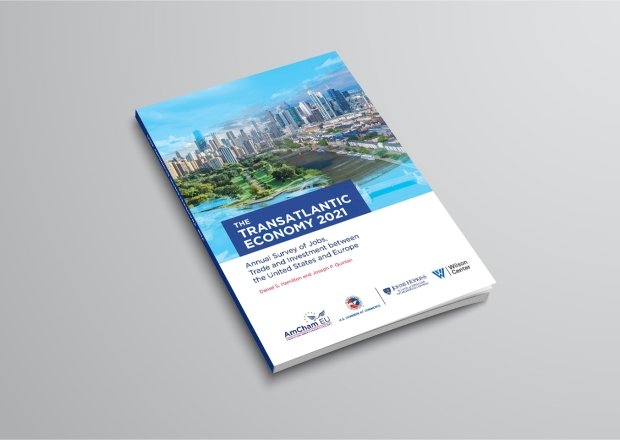