Skip to main content
Support
Explore More
Close
Article
Economics and Globalization
We Got To Yes. Now It’s Time for a Reality Check.
By Aaron David Miller on July 14, 2015
Share on FacebookShare on TwitterShare via Email
SharePrint
Part of the The Iran Nuclear Deal: Commentary and Context
Article

An Iran Deal, At Last

"The terms, however, are likely to give both proponents and opponents new arguments for their positions. No party got all it wanted; there’s a shortcoming to every benefit," writes Robin Wright.

After nineteen days of marathon negotiations and four missed deadlines, Iran and the world’s six major powers announced a nuclear deal in Vienna this morning. The exhaustive and elusive diplomacy—sustained by an unsettling combination of Twizzlers, gelato, string cheese, and Rice Krispies treats—was dicey to the end. Secretary of State John Kerry wasn’t sure that the often volatile talks would succeed, until Iran’s foreign minister, Mohammad Javad Zarif, showed up at Kerry’s working quarters, in Room 103 of the opulent Palais Coburg, just before midnight Monday.

“This has always been a Rubik’s Cube,” a senior U.S. negotiator told me. “In the early morning hours of July 14th, the last cubes clicked into place. It was an incredibly arduous and incredibly complex process.”

It was also the longest mission of a Secretary of State in more than three decades. Since October, 2013, Kerry has flown some four hundred thousand miles—the equivalent of circling the world sixteen times—to prevent a tenth country from getting the bomb.

The agreement is the Obama Administration’s boldest foreign-policy initiative. It marks the first success in dealing with Iran since its 1979 revolution and the prolonged seizure of the American Embassy in Tehran.

“This deal offers an opportunity to move in a new direction,” the President said in an early-morning address at the White House. “We should seize it.”

The deal—a hundred pages of technical nuclear and financial minutiae—is designed to contain Tehran’s ability to produce a bomb for at least a decade. It will also introduce broader U.N. inspections to monitor, permanently, both declared and suspected nuclear facilities, even after the deal expires.

“We got far more than we needed, particularly in the areas most important to us,” a State Department official in Vienna told me. “It will be well perceived.”

The terms, however, are likely to give both proponents and opponents new arguments for their positions. No party got all it wanted; there’s a shortcoming to every benefit. And, in geopolitical terms, while the deal may check Iran’s nuclear prowess, critics will note that it recognizes the Islamic Republic as a legitimate interlocutor—and takes regime change off the table. Iranian hard-liners will make the same claim, since Tehran is now dealing with a country they call the Great Satan.

The agreement, or Joint Comprehensive Plan of Action, seeks to extend the period required for Iran to produce a bomb—the so-called breakout time—to at least a year. It is currently two to three months. The deal would allow the international community more time to mount any of several responses if Iran went forward with a weapons program.

The combination of restrictions and time frames—ranging from ten to twenty-five years—is also designed to give the international community more insight into Iran’s program and capabilities. “I have no doubt that, ten or fifteen years from now, the person who holds this office will be in a far stronger position, with Iran further away from a weapon and with the inspections and transparency that allow us to review the deal,” Obama said this morning.

But the deal will not eliminate Iran’s capabilities permanently. Tehran has now acquired the knowledge required to build a bomb. “We have gone from preventing Iran having a nuclear ability to managing it,” Senator Robert Menendez, a New Jersey Democrat and former chairman of the Senate Foreign Relations Committee, said on ABC’s “This Week.” After the deal expires, he said, “They will have a pathway toward a nuclear bomb, should they choose to do so.” The Republican Presidential candidate Rick Santorum called the deal a “catastrophic capitulation.”

The deal will, however, significantly shrink several aspects of Iran’s nuclear program, which Tehran has long insisted is only for peaceful energy. It reduces the number of centrifuges used to enrich uranium by two-thirds. It cuts back on the number of facilities that enrich uranium—down to one—and requires the conversion of a facility being built to produce plutonium.

But Iran will still be able to enrich uranium, the fuel cycle for both a peaceful energy program and a bomb, albeit at a minimum level, at its Natanz facility. Several members of Congress, as well as Israel and the Gulf sheikhdoms, wanted to stop Iran from enriching at all. “The concessions agreement Iran is about to receive paves the way for it to arm itself with nukes and continue disseminating terror worldwide,” Israeli Prime Minister Benjamin Netanyahu tweeted last week. On Monday, Netanyahu launched a twitter account in Farsi to press the message.

The hope is that the deal will make another Middle East war less likely, at a time when the United States is engaged in air wars in Iraq, Syria, and Libya and selling arms to Saudi Arabia to wage its war in Yemen. It may stall or prevent a nuclear arms race in the Middle East, the world’s most volatile region. “As Congress and the American people review this deal, it will be important to consider the alternative,” Obama said. “Without this deal, there is no scenario where the world joins us in sanctioning Iran until it completely dismantles its nuclear program.”

If Iran cheats or strays from the deal’s terms, the United States still has its military option. The arrangement is not going to defuse the deeper sectarian and political rivalries in the Middle East. Conflicts in Syria, Iraq, and Yemen pit Iran’s Shiite government against its Sunni Arab neighbors, who have expressed their unhappiness with the deal. Indeed, the agreement may deepen concern among Sunni regimes fearful of Iran’s reëmergence as a player rather than a pariah.

American and Iranian officials have told me that the renewed contact between Iran and the West could facilitate discussion of other flashpoints in the Middle East.

But the deal does not signal a renewal of diplomatic relations or an end to tensions over Iran’s behavior, especially its support for terrorism and its human-rights abuses. The basics of its foreign policy may not change. “Regardless of whether there’s an agreement or not, my expectation is that Iran will continue the malign activity across the Middle East that we have seen over the past several years,” Marine General Joseph Dunford told the Senate Armed Services Committee during his confirmation hearing as the next chairman of the Joint Chiefs of Staff last Thursday.

Over the weekend, Iran burned large American and Israeli flags as part of the Qods (Jerusalem) Day protests. Despite almost two years of diplomacy, Supreme Leader Ali Khamenei’s office tweeted, “Leader in meeting with university students: The US is perfect instance of Arrogance. Prepare yourselves for more fight against Arrogance.”

And yesterday, even as the negotiators in Vienna went into their final session, the jailed Washington Post correspondent Jason Rezaian was back in a Tehran courtroom for his third hearing, on espionage charges. “I wish Jason was out so he could cover this wonderful story of Iran and the U.S.,” his mother, Mary Rezaian, told ABC on Monday. She flew to Iran for the trial but was not allowed in the courtroom. Two other Iranian-Americans, the Christian pastor Saeed Abedini and a former Marine, Amir Hekmati, are also still imprisoned in Tehran. The former F.B.I. agent Robert Levinson was last seen on an Iranian island, in 2007.

As a result of the deal, lifting various punitive economic sanctions will open up Iran’s consumer-hungry citizens to international markets. The country’s population has more than doubled since the revolution, to almost eighty million people. A Western envoy in Iran described it to me as “the last gold mine on Earth.”

But U.S. businesses will still find Iran largely off-limits, because other U.S. sanctions, tied to human-rights practices and support for terrorism, remain in place. Iran will be able to reclaim more than a hundred billion dollars of its oil revenues trapped in foreign banks by sanctions. Skeptics warn that Tehran may use the funds to arm or aid its allies, including Syrian President Bashar al-Assad, Lebanon’s Hezbollah, Palestinian Hamas, Yemen’s Houthis, or assorted Shiite militias across the region.

“We have to make very clear that there is a deterrence in the longer term, because, if not, in twelve, thirteen years, we will be exactly back to where we are today,” Menendez said. “Except that Iran will have one hundred billion dollars to one hundred and fifty billion dollars in its pocket and promoting its terrorism throughout the Middle East.”

But, in Vienna this morning, the euphoria of epic diplomacy prevailed. For the first time in decades, a country on the verge of obtaining of a nuclear weapon has been forced to stop its program, at least for a while. Diplomacy had failed to do that with the last four members of the nuclear club—North Korea, Pakistan, Israel, and India. Those countries are now estimated to have more than three hundred bombs altogether.

As diplomacy got down to the final hours, Zarif tweeted Monday, “If #IranDeal reached, triumph of diplomacy means we all will have won when we all could have lost. Plain and simple; no spin needed.”

By Tuesday afternoon, reality had sunk in. Kerry and Zarif flew out of Vienna to begin selling their deal back home.

This article was originally published in The New Yorker. 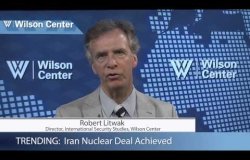