Skip to main content
Support
Explore More
Close
Article
NAFTA/USMCA
Many of Trump's NAFTA goals aren't new — they're from the TPP
By Christopher Wilson on July 26, 2017
Share on FacebookShare on TwitterShare via Email
SharePrint
Part of the USMCA Resource Page
Article

Learning from the Experience of NAFTA Labor and Environmental Governance

As negotiators from the US, Mexico, and Canada prepare to begin talks on a renegotiated NAFTA agreement, this is an opportune moment to think about how to strengthen trilateral oversight in the important areas of labor and environmental policy.

As negotiators from the United States, Mexico, and Canada prepare to begin talks on a renegotiated NAFTA agreement, this is an opportune moment to think about how to strengthen trilateral oversight in the important areas of labor and environmental policy. The Trump Administration published its negotiating objectives in July, and they included the aim to strengthen both labor and environmental oversight within NAFTA. Clear lessons can be drawn from the NAFTA experience about what worked and what did not, and how civil society participated and evolved.

NAFTA included two side agreements, one on the environment and one on labor. The purpose was to pressure all three member states to uphold their own laws in these areas. Mexico’s inclusion in NAFTA was the original rationale, but the requirements applied to all three countries. Non-compliance was not to be tolerated.

What happened next is very important. The side agreements created routes for civil society to complain about non-compliance, and therefore contribute to governance. Although many see the side agreements as worthless, they did have a significant impact on Mexican civil society, and to an extent, governance in Mexico too. The way this happened is less obvious and less understood than trade or investment-led change, but it is worth our attention. In fact, the impact of the labor and environmental side agreements differed, because their institutions and procedures differed – and therein lies an important lesson. Let’s look at both in turn.

First, the labor side agreement, known as the North American Agreement on Labor Cooperation (NAALC), established that any Mexican civil society group could take a complaint about Mexican non-compliance to the Department of Labor in Canada or the Department of Labor in the United States. The problem with this accord is that only a small number of labor rights are subject to sanctions. While 11 labor principles are mentioned in the agreement, only three of them give rise to potential trade-suspension sanctions (protection for children and young persons; minimum employment standards; and prevention of occupational injuries and illnesses). They do not include some of the widely-recognized International Labor Organization rights, such as freedom of association and collective bargaining. The Trump negotiating objectives include the laudable aim of widening these labor principles substantially, making reference to International Labor Organization principles.

In the case of the environmental side agreement, known as the North American Agreement on Environmental Cooperation (NAAEC), opportunities for civil society were different. Under NAAEC, Mexican civil society does not take complaints to another member state. Instead, they go to a trilateral commission known as the Commission on Environmental Cooperation (CEC). This commission has the power to initiate fact-finding reports about the complaints and publish them (though it depends on the approval of the member states). It can also conduct reports on its own initiative.

Moreover, unions gained capacity through repeated interactions with counterparts in the United States and Canada. The decision to file a complaint and work with other labor groups across the border generated better communication, organizational, and legal skills. Claims became more technically-proficient and less politicized. Mexican unions were given a chance to speak in public hearings in the United States about Mexican labor practices.

These unions honed their skills in terms of how to compile legal cases, gather and present evidence of labor violations (including witnesses at public hearings in the United States), and convince investigators of the need to look into Mexican practices. This elevated their claims considerably in terms of publicity and shaming pressure. This track record eventually led Mexican officials to give labor activists a place at the table in later reform discussions, and after many false starts, it now appears that significant labor reform is underway in Mexico.

On the environmental side, the capacity-building effects were even stronger. One of the most important results was the emergence of a small legal NGO known as CEMDA (the Mexican Center for Environmental Law) as a key player in environmental governance. CEMDA was formed in 1993 specifically because of the NAFTA environmental side agreement, and has since led numerous legal challenges to poorly-regulated development projects and created educational and learning opportunities for other civil society organizations.

How best to design civil society participation
Several elements of the environmental agreement were superior to the labor agreement. First, the trilateral CEC, based in Montreal and staffed by professionals from all three member states, was established with the authority to consider citizen complaints about environmental compliance from across the three countries. In certain cases it can act on its own to issue reports highlighting environmental problems. Its independence de-politicized and de-nationalized its fact-finding and reporting.

The labor agreement instead mandated new offices within the labor departments of the three member states. They are known as ‘National Administrative Offices.’ When a Mexican trade union wants to complain about Mexican labor practices, it files the complaint in the U.S. or Canadian Department of Labor, who then have the authority to follow through or reject the filing, as they see fit.

Why is this difference important? The track record shows that when the review body is neutral (ie, not part of a member state government), the governments being investigated are more accepting of their findings. Criticisms carry more weight and are perceived as more legitimate than the criticisms of an office within a member state government. Mexico was more willing to accede to the findings of a neutral body than it was to the findings of the U.S. Department of Labor.

In contrast to the Commission on Environmental Cooperation, there was no facility for a public report to be made by an independent trilateral labor agency. In fact, Mexico complained bitterly about incursions into its sovereignty by the U.S. Department of Labor. The Secretaría de Trabajo y Previsión Social consistently denied problems, unlike SEMARNAT which accepted its enforcement weaknesses and often made immediate efforts to rectify problems.

It was not simply nationalist sensitivities which affected case outcomes in the U.S. Department of Labor – ideological biases, political agendas, and electoral timelines mattered too. For example, when President Bush came to power in 2001, his Administration accepted far fewer labor cases than the Clinton Administration had. Mexican labor groups felt abandoned, and they stopped bringing complaints.

In addition to these differences, the environmental accord created a permanent body for civil society to participate in agenda-setting and oversight roles. It is called the Joint Public Advisory Committee, and it is made up of civil society representatives from the three member states, who together work on various aspects of the regional environmental agenda, including compliance.

This was missing on the labor side, and so when the process of complaint filing was completed, labor unions returned home. They did not stay engaged with partners from other member states or work to set the labor rights agenda. The environmental agreement also provided (admittedly small amounts of) capacity-building resources that benefitted bureaucrats and NGOs in member countries (these resources were terminated after just a few years).

Moving Forward
Taking its cue from the very TPP which it rejected, the Trump team is seeking to strengthen labor and environmental oversight. This is good news. However, because it has not learned the lessons of NAFTA, it is emphasizing the wrong things. Trump’s objectives on labor make no mention of establishing an independent trilateral review body to gather civil society complaints and undertake investigations. Instead, dispute settlement and review are left to governments, with all their deep conflicts of interest.

Likewise, on the environment, Trump wants to create rules to guarantee domestic enforcement without making room for independent review. Civil society may only complain directly to its own government and so effective enforcement is entirely dependent on the good will of governments who caused or contributed to the problems in the first place.

Government to government disputes are subject to political influence. Labor rights and environmental cases may not be pursued if the trade partner’s leader is a political ally or has domestic political difficulties. With limited resources, member states must select their priorities with care. To overcome these weaknesses, there must be multilateral bodies with independent review and reporting powers, widening the options for civil society wishing to make complaints. Containing enforcement matters entirely within the member state whose practice is being questioned is a conflict of interest.

Taking these lessons to heart, what NAFTA negotiators should do when they meet this month is to create neutral inter-governmental bodies with mechanisms to receive complaints about non-compliance directly from affected civil society groups in any of the member states. These bodies would then have powers (under specified decision rules) to conduct fact-finding investigations and reports, after which member states could take action. Civil society should also have a permanent role in the functioning of these inter-governmental agencies, helping form its priorities and work plans, and participating in compliance oversight. This would do two important things – it would strengthen NAFTA’s legitimacy and it would increase the efficiency of compliance oversight.

Separately, member states should also be encouraged to foster stronger domestic oversight institutions (such as freedom of information agencies, courts, and depoliticized career paths for bureaucrats). In addition, region-wide resources for training and mobility could help narrow the capacity gap. They could provide opportunities for education and training of civil servants and NGO officials, as well as opportunities for secondments and placements in NGOs, domestic ministries and the inter-governmental institution. Such reasonably low-cost steps would help instill values of good governance, promote communication, and increase transparency and accountability.

Mark Aspinwall is Director of International Studies Program at CIDE, Mexico’s Center for Economic Research and Teaching.  His latest book, Side Effects: Mexican governance under NAFTA’s labor and environmental agreements was published by Stanford University Press in 2013. The translation Acuerdos Paralelos was published by Editorial CIDE in 2014. 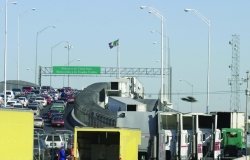