Mexico’s economy is expected to shrink by 10 percent in 2020. The government has resisted pleas to make large low-cost loans to businesses or payments to families because President Andrés Manuel López Obrador does not want to increase the public debt, which is approaching 60 percent of GDP.

Mexico’s GDP fell sharply during the 2nd quarter of 2020

Mexico’s exports of both manufactured goods and oil dropped about 20 percent in May 2020 compared to May 2019.

Most workers employed in Mexico are in the informal sector, meaning that their employer has not registered them with the Mexican Social Security Institute (IMSS) that provides health and child care services as well as pension and other benefits for enrolled workers and their families. Employment in formal private sector jobs fell sharply in 2020.

President Andrés Manuel López Obrador in July 2020 proposed higher employer pension contributions for workers enrolled in IMSS, with total contributions scheduled to increase from 6.5 to 15 percent of wages over eight years. Workers have since 1997 contributed 1.1 percent of their pay for IMSS pension benefits, employers 5.2 percent, and the government 0.2 percent on wages paid up to 25 times the minimum wage. The new employer contribution rate will eventually be 13.9 percent.

Currently, workers and their employers must contribute for 1,250 weeks or 25 full-time years, and workers must 60 or older to receive pension benefits. The AMLO reform would reduce the work requirement to at least 750 weeks or 15 full-time years, but leave the minimum age for receiving pension benefits at 60. AMLO’s coalition controls both houses of Congress, making it likely that the pension reform will be enacted.

The goal of the IMSS pension reform is to raise the pension replacement ratio from the current average of 40 percent of previous earnings, the lowest in the OECD, to 80 percent and thus provide Mexicans with a “dignified retirement.” However, one effect of raising employer contributions to IMSS may be to keep more jobs in the informal sector, meaning that most workers would remain outside the IMSS system. Many employers complain that their enrolled employees rarely benefit from IMSS pensions.

Mexico’s per capita gross national income, as measured by the World Bank, peaked at $10,500 in 2014 and was $9,400 in 2019, not adjusted for inflation. One reason for slow income growth is slow productivity growth, especially in the informal sector that employs most Mexican workers. The growth in Mexico’s GDP per capita was lower than in the US and other developing countries since 1990. 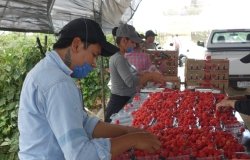