Skip to main content
Support
Explore More
Close
Article
Migration
2018 Migration to and through Mexico Fact Sheet
By Rachel Schmidtke on March 15, 2019
Share on FacebookShare on TwitterShare via Email
SharePrint
Part of the The Expert Take
Article

Record numbers of migrants, over 70 percent of whom are from Guatemala and Honduras, are being processed by immigration officials. Asylum claims are up more than 1,000 percent since 2013.

Shelters along the border are overwhelmed, and the government is scrambling to keep up. This may sound like the introduction to every article you have read about the U.S. southwest border crisis, yet the prior statements refer not to the United States but to Mexico.

The similar nature of the challenges faced by both countries makes it clear that, more than a U.S. border security breakdown, we are facing a regional crisis involving issues of governance, development and, yes, migration and border management.

Recognizing these similarities can help us understand the best way to address the crisis, but it also raises questions about how we got here.

Officials in the Trump administration state that the reason for the increase in family units in particular is that migrants and smugglers have become aware of vulnerabilities in the immigration system and seek to exploit loopholes to stay in the United States undocumented.

Former Secretary of Homeland Security Kirstjen Nielsen stated on March 29: “Now we are seeing a flood of families and unaccompanied children, who — because of outdated laws and misguided court decisions — cannot receive efficient adjudication and, in most cases, will never be removed from the United States even if they are here unlawfully. The result is a massive ‘pull factor’ to our country.”

Driven by the surge in Central American migrants, the number of asylum application received by the United States rose from 43,000 in 2013 to 161,000 in 2018. The number is projected to be even higher for 2019. Yet, the United States is not the only country experiencing this spike.

Mexico has joined the United States as a principal destination for those fleeing the Northern Triangle countries of Guatemala, Honduras and El Salvador.

The fact that Mexico and the United States have experienced the same pattern in immigration from Central America calls into question the argument that legal loopholes in U.S. immigration law are the main driver of the recent wave of migrants.

If these U.S. laws to protect children in the immigration system were the principal cause, rather than a complex mix of push and pull factors, one would not expect Mexico to grow as a destination for the migrants, at least not at the same rate as the United States.

Beyond U.S. policy and rhetoric, there are other important drivers of migration that must be accounted for in designing an appropriate response. Three factors in particular are contributing to the rise in migration to Mexico and the United States. 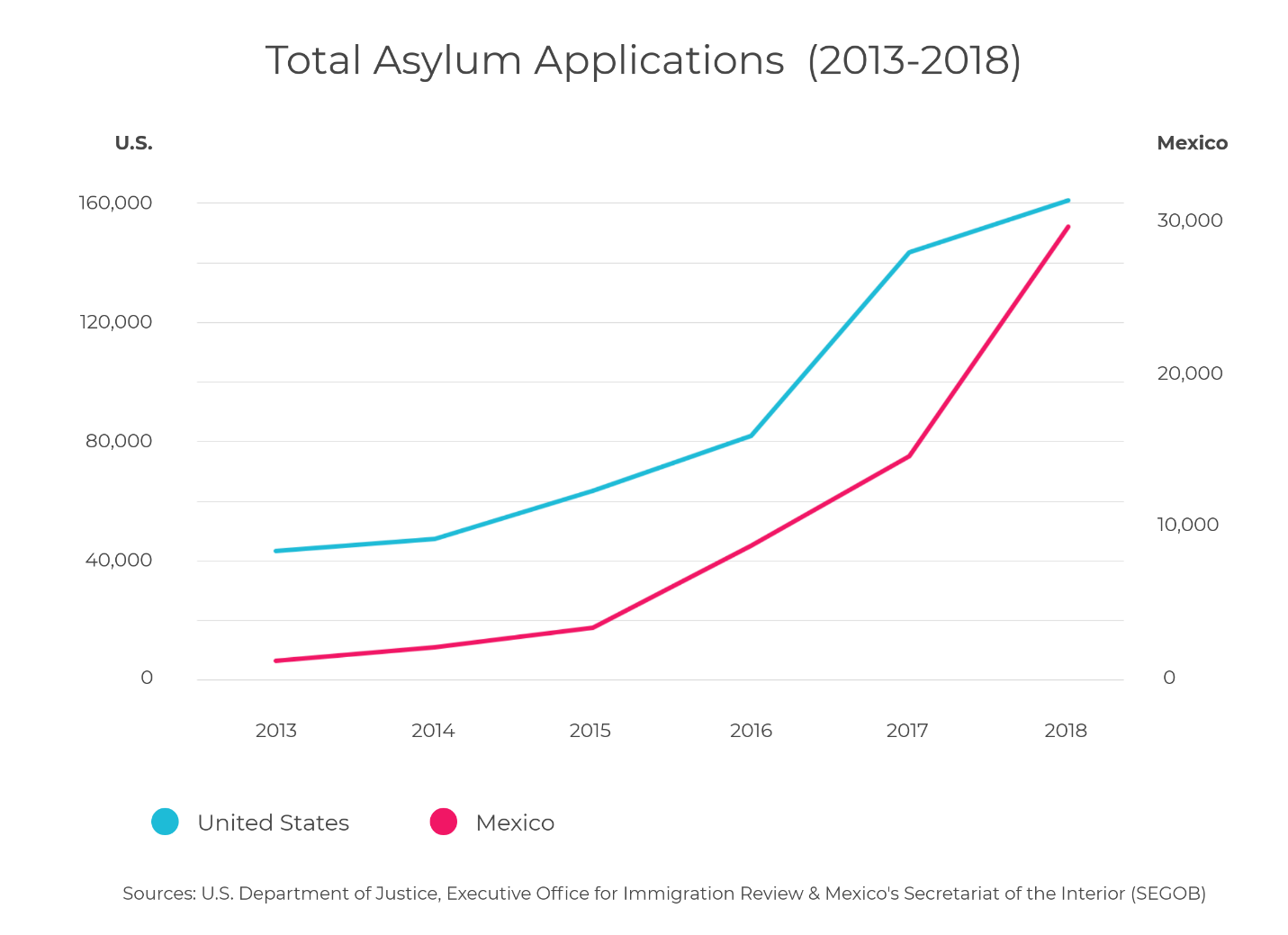 The push factors for Hondurans, Guatemalans and Salvadorans are significant and have been so for years. The murder rates in El Salvador and Honduras, while declining, are still high, and they remain some of the most dangerous countries in the world.

In all three countries, governance is weak, and there is a lack of confidence in institutions. Particularly in Guatemala and Honduras, the countries where the bulk of migrants are coming from, climate change and food security will only continue to threaten livelihoods. The prevalence of violence against women in the region remains staggering, with little access to justice.

Innovations in travel and human smuggling make it easier for migrants to travel through Mexico to the U.S., and caravans have become more common, as travelling in large numbers provides migrants a safer passage through Mexico, especially for families.

Human smuggling is an increasingly sophisticated, efficient and lucrative operation; a prime example is the new phenomenon of “express buses” operated by smugglers who charge up to $7,000 a person to move them quickly through Mexico in an effort to minimize the risk of dangers such as kidnapping, extortion and assault.

Mexican immigration policy has changed in recent months since President Andres Manuel Lopez Obrador took office in December. The number of humanitarian visas issued by the Mexican government went up from 1,385 in December to 14,220 in January as the government attempted to take a more welcoming posture toward immigrants.

By opening Mexico’s doors to migrants in an effort to protect them from abuse and provide them with opportunities — very reasonable and generous goals — Mexico may have inadvertently welcomed thousands of migrants to transit through the country and either seek asylum or illegally enter the United States.

The United States and Mexico are struggling to respond to this migration wave and find common ground to manage it together. Some progress has been made in recent conversations between the governments, and Mexico has re-strengthened its immigration controls in recent days, but much work remains to be done.

A regional approach to development, security and governance is needed to tackle the prevailing conditions in Central America that force people to migrate.

Mexico and the United States agreed to increase support for Central America in December, yet more recently the U.S. has threatened to cut aid to Central America, a move that would only threaten to deepen the crisis in the Northern Triangle.

The U.S. and Mexico need to improve their own border security and the management of migrant flows. Responding to both U.S. pressure and the strains on its own domestic capacity to receive migrants, Mexico has already changed its policy to fall in line with U.S. interests.

After a meeting with then-Secretary Nielsen, Mexican Interior Minister Olga Sanchez Cordero recently announced the creation of a border security “containment” belt in the Isthmus of Tehuantepec, the narrowest part of southern Mexico and a natural funnel for traffic heading north.

Mexico should also invest more on basic border security capacity and in its asylum processing agency to provide an effective mix of carrots and sticks that encourage Central Americans to use legal pathways and avoid illegal ones.

For the United States, we need major investments in immigration courts, updating the asylum system to respond to the needs at the border, shifting capacity to house families and scaling up alternatives to detention, such as the use of ankle bracelets to ensure that migrants show up for court.

The growing numbers leaving Venezuela (4,249) and Nicaragua (566) — who’ve applied for refugee status in Mexico 2018 — show that a whole new wave of challenges may be on the horizon.

Investments in new approaches to managing migration and borders in the U.S. and across the region are urgently needed to manage the challenges of today and to prepare for future waves of immigration.