New Polling Data from Mexico: Does Positive Opinion of the U.S. Depend on Progress in NAFTA Talks?

Previously unpublished polling data from a new partnership between the Mexico Institute and Buendía & Laredo provides view of Mexican opinion of the United States and NAFTA. 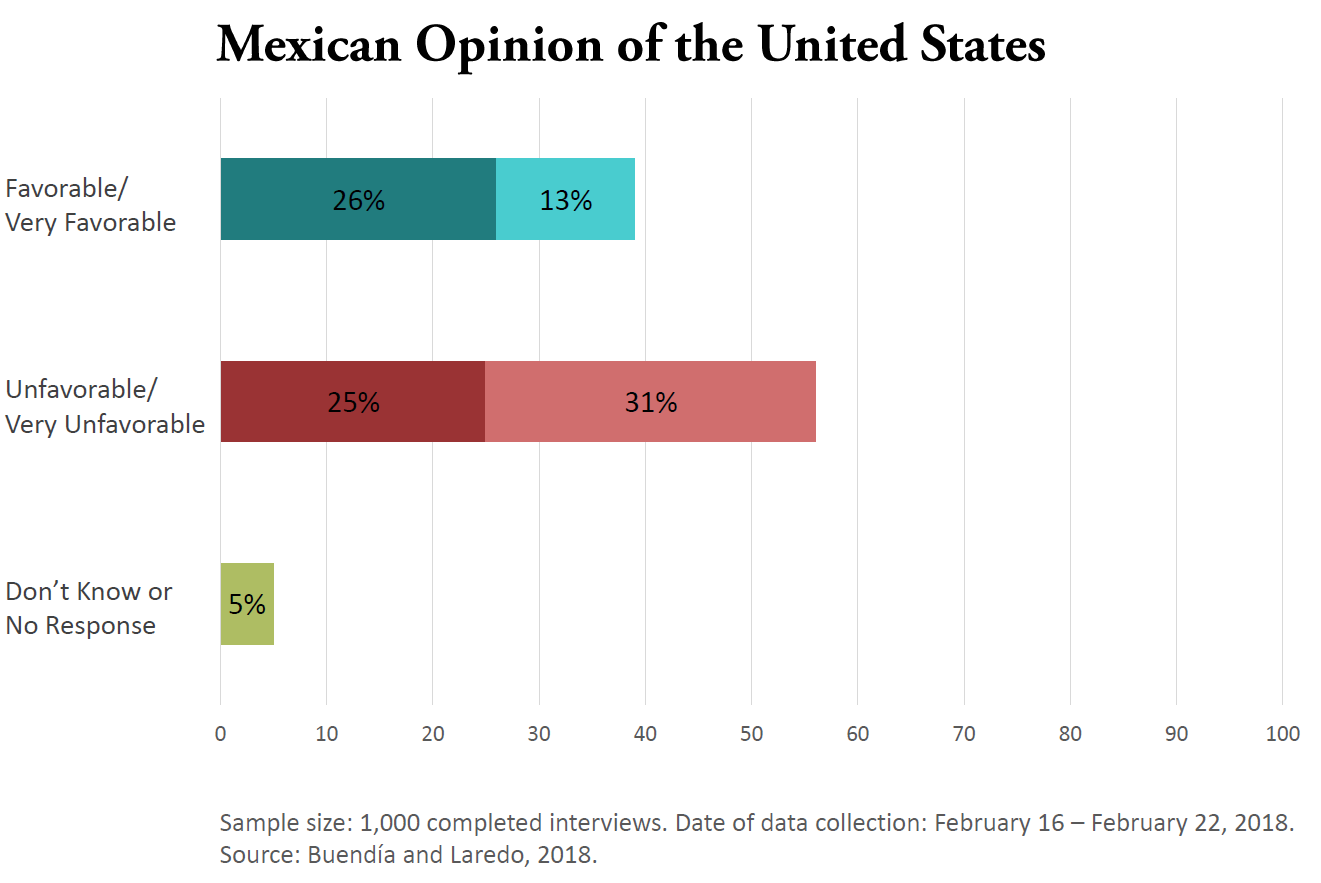 Since the 2016 election of Donald Trump as President of the United States, and especially since President Trump’s repeated inflammatory comments about Mexico, there have been predictions of a resurgence of anti-American feeling and an outbreak of “gringo-phobia” in our southern neighbor. Given that this is an electoral year in Mexico, many predicted that the candidates and campaigns would find it difficult to resist the temptation to use the current tensions in the bilateral relationship as a way to rally support.

In a January 2018 Mexico Institute paper, we warned of the possibility of losing a generation of younger Mexicans that have tended to hold more positive views of the United States. They have not, until now, lived through a period of serious tension in the bilateral relationship, and the coming months and years could have a major impact on whether or not their positivity holds as they grow older. More than just the policies themselves hang in the balance as the United States and Mexico negotiate NAFTA and the United States makes changes to its immigration enforcement and border policy.

And yet the candidates in Mexico have thus far resisted the temptation to invoke anti-American sentiment. Indeed, we have seen a measured response almost across the board in Mexico. Even leftist candidate Andres Manuel Lopez Obrador (AMLO), the candidate most pre-disposed to employ anti-American rhetoric, has adopted a cautious and dispassionate approach, stating recently, “There are sectors (in the US) that don’t have enough information & blame Mexicans for everything that happens to them. So we have to talk to them, inform them about having a friendly relation, of mutual respect & President Trump needs to help in this task.” The question that arises is, will politicians in Mexico continue to hold back?

Both the incipient, potential recovery and the persistent unfavorable views are important. The first reminds us that Mexican opinion of the United States, though generally up over the past two decades, remains somewhat volatile. After decades or even centuries as distant neighbors (to borrow the phrase from Alan Riding), the concerted effort of the U.S. and Mexican governments to improve relations and deepen cooperation in recent decades remains a work in progress and has yet to fully permeate the public consciousness of either country. This malleability manifests as more of a risk when opinion is favorable, but it may also allow for a quick recovery if the rhetoric or policies causing the negative views change.

Though negative opinion has softened somewhat, the conditions have yet to allow for a true a recovery. Mexicans continue to believe that the United States and Mexico are working at cross-purposes across all surveyed issue areas, including the trafficking of illegal drugs, trade and economic development, combatting organized crime, and securing the border. 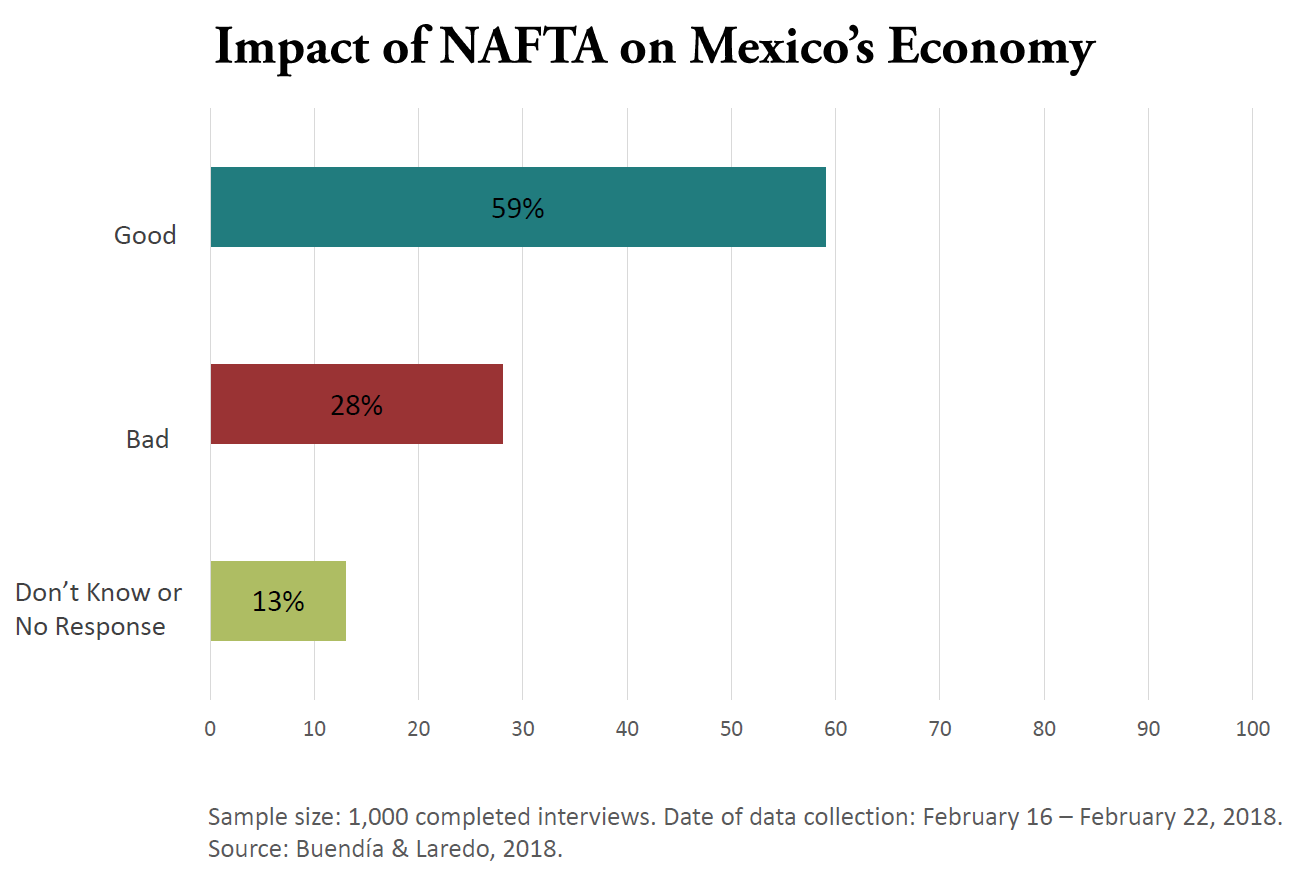 On NAFTA itself, there are some signs of optimism. As has long been the case, Mexicans broadly support the agreement. The new poll by Buendía & Laredo finds that support as strong as ever with those who see NAFTA as a positive for the Mexican economy (59 percent) outnumbering skeptics (28 percent) by more than two to one. With such a clear-headed understanding of the importance of NAFTA to the Mexican economy, it is important that most Mexicans believe the ongoing NAFTA talks are headed in the right direction. Some 44 percent of Mexicans believe the renegotiation of NAFTA is going in a good direction, while 36 percent believe it is going poorly.

This is a somewhat surprising and very important finding. Despite the often-dire predictions commonly seen in the media about the direction of the NAFTA talks, Mexicans remain optimistic. This may well be testament to the fact that Mexican government officials are controlling the narrative around NAFTA given that the other potential opinion leaders, the presidential candidates, have focused their rhetoric on domestic policy and personal attacks. 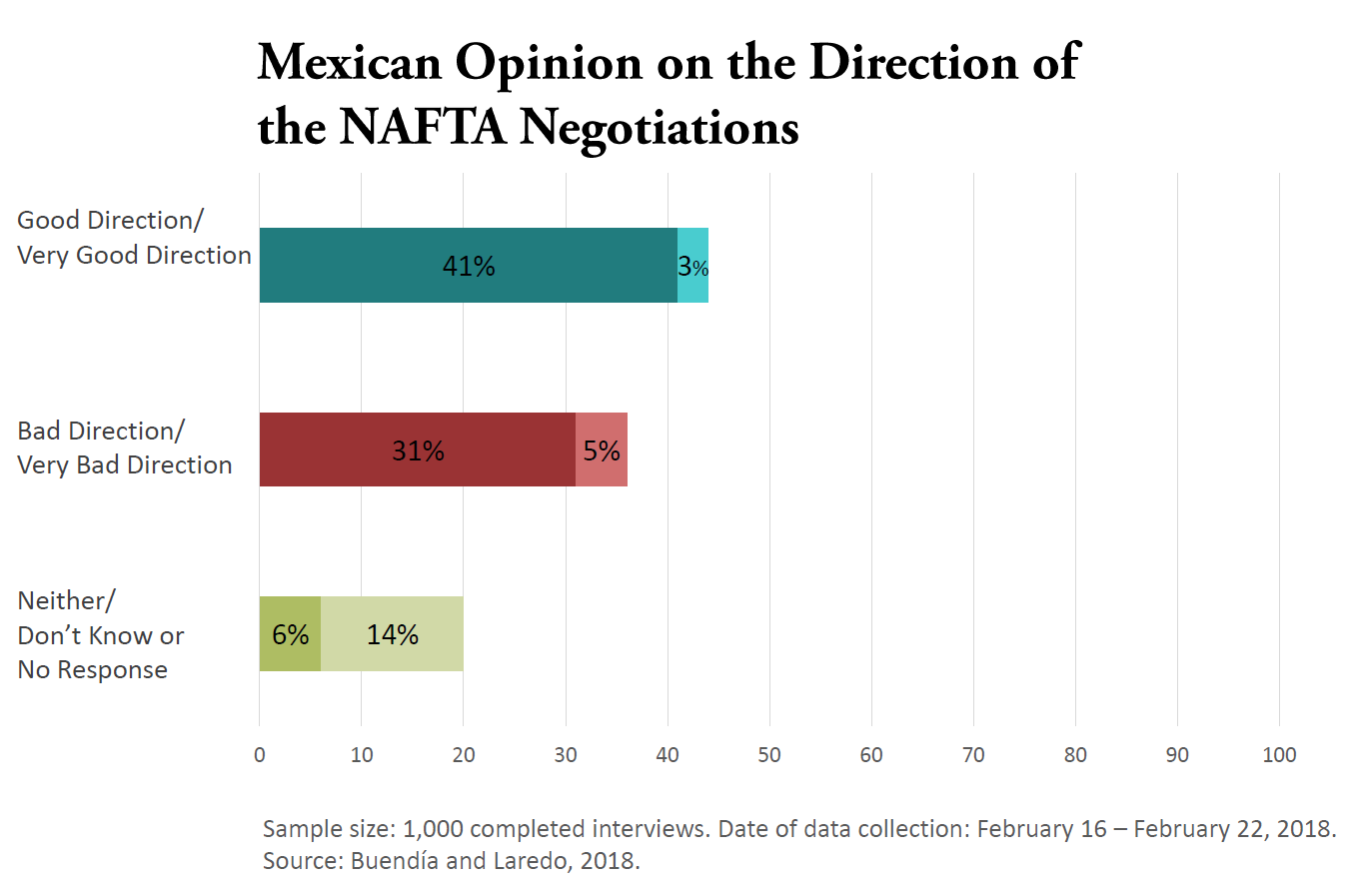 The finding is important because it suggests the modest recovery in Mexicans’ opinion of the United States could very well be linked to the optimism on NAFTA, the most pressing bilateral issue under consideration at the moment. Mexicans overwhelmingly believe NAFTA matters to the domestic economy—to their pocketbooks—and a majority believe the talks are going well. Can we therefore say that, without this positive view on the negotiations then even fewer Mexicans would be positive about the United States? What if the NAFTA negotiations breakdown without an agreement, or if President Trump makes the decision to pull the United States out of the agreement? Although Mexican public opinion is still overwhelmingly negative on the United States, polling from 2017 reminds us that it is of course possible for positive views to fall even further.

The stakes in the NAFTA negotiations are therefore about more than just dollars and cents, trade and prosperity. NAFTA makes U.S.-Mexico relations tangible and relevant to day-to-day life. In an important way, NAFTA acts as glue that binds the two countries together, not simply in the economy but in the minds of Mexican citizens. Without it, Mexicans and Mexican politicians might yet be tempted to embrace less friendly attitudes towards their northern neighbor.

This article was originally published on Forbes.com.