Pacific Nations Leave the U.S. in the Rear-View Mirror on Trade

The contrast could not be greater: the president of the United States signs an order to impose new tariffs on steel and aluminum, which threatens partners and allies, on the same day that the 11 remaining partners of the Trans-Pacific Partnership (TPP) sign an agreement to expand trade and establish improved rules governing trade.

The United States administration is focused on defending its domestic market against perceived attacks and using what many criticize as counterproductive and ultimately harmful tactics. Its former TPP partners are focused on deepening trade cooperation and boosting mutual prosperity.

The U.S. is asking partners to negotiate their way out of new steel and aluminum tariffs, while the TPP-11 are inviting others, including the U.S., to join their new high-standards agreement, which includes best practices originally suggested by the United States.

Read the full article in The Hill. 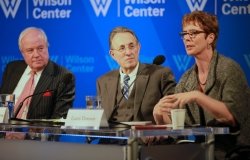 Blog post
Economics and Globalization
Up in the Air: The Future of Latin America’s Airline Industry
By Anders Beal on April 3, 2020