The Comprehensive and Progressive Trans-Pacific Partnership: Implications for Global Trade

The Comprehensive and Progressive Trans-Pacific Partnership: Implications for Global Trade

The current agreement includes several major economies that will have a profound influence on the future of global trade and investment. The United States withdrew from negotiations in January 2017.

On March 7, the Wilson Center hosted in-depth panels discussions on the economic impact of the agreement for member and non-member countries and the future of integration of the Asia-Pacific region and the Western Hemisphere.

*Special Pre-Event Interviews: Shihoko Goto of the Asia Program and Laura Dawson of the Canada Institute discuss TPP, the global implications of the TPP’s resurrection, and the deal's importance to Asia and Canada, respectively.

Singapore's Ambassador to the United States

Deputy Ambassador of Canada to the United States

Head of the Department of Economics and Environment, Embassy of Peru

Global Fellow;
Ambassador of Chile to the People’s Republic of China 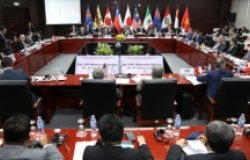 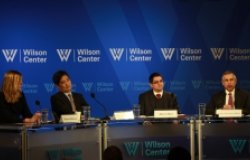 Audio
Trans-Pacific Partnership
The Future of Global Trade under CPTPP