The new initiative encompasses both the Council of Women World Leaders (CWWL) – a group of nearly 50 female current and former heads of state and government - located at the Wilson Center since 2011, and the Women in Public Service Project (WPSP), which moved to the Wilson Center from the State Department on June 22. The Initiative will promote networks among women leaders, mentoring and training of emerging women leaders, in support of the goal of 50% female public servants by 2050.

“Rangita’s tireless advocacy for women’s leadership, experience as a leading human rights law scholar, and unbeatable network of contacts globally makes her the ideal choice to direct the Global Women’s Leadership Initiative,” said Jane Harman, Director, President, and CEO of the Wilson Center. “The Global Women’s Leadership Initiative will be a force multiplier, empowering women to serve their communities and their nations.”

De Silva de Alwis previously directed the Women in Public Service Project’s 2012 Institute at Wellesley College, a partnership between the Seven Sisters Colleges and the U.S. Department of State. She is also the Director of International Human Rights Policy and the inaugural Susan Bailey McGee Scholar at the Wellesley Centers for Women and faculty at the Madeline Albright Institute for Global Affairs at Wellesley College.

The Wilson Center is planning Global Women’s Leadership Initiative activities in September at the United Nations General Assembly session and an October conference in Abu Dhabi. 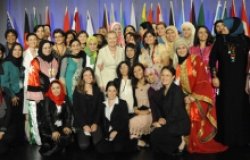 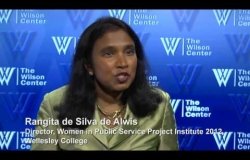 Video
Gender
The Arab Awakening: A Step Forward or Back For Women?