“And so we have an initiative underway where the senior members of the Mexican Government will be coming up here on May the 18th to participate in an interagency process with us to see if we can get at transnational organized crime and begin to break these organized crime units up.“  Secretary of State Rex W. Tillerson speech to Department of State employees, May 3, 2017.

U.S. Secretary of State Rex W. Tillerson’s maiden speech before U.S. Department of State employees on May 3rd forms the backdrop for an important meeting he will host with his Mexican counterpart today.  It will be an opportunity to redefine U.S.-Mexico security cooperation for the foreseeable future.  The question is whether that opportunity will be used to define new and effective ways to address the vexing problem of organized crime, corruption, and extreme violence, or whether it will simply result in a doubling down on what has already been tried and mostly failed.  In other words, will the new plan look a lot like the old plan with both sides simply trying harder?

Secretary Tillerson’s words are reassuring in part because they signal a willingness to work together with Mexico to address serious problems of insecurity.   It goes without saying that nothing is more important to the immediate safety and security of the United States than its relationship with its neighbor Mexico.  But the President’s own statements about Mexico, Mexicans, and their security forces during the campaign and after his election raised concerns that he might undermine decades of work to reduce tensions between the two countries and to address common security threats through a framework of “shared responsibility.”

But cooperation is not an end in itself, but a means to an end and what must be examined is whether the strategy being pursued is appropriate.  The Secretary’s suggestion that the focus of security cooperation should be “transnational organized crime and (to) begin to break these organized crime units (OCU) up,” raises significant questions.

First, both the Mexican and U.S. government have already been very successful in “breaking up” OCUs.  Over the last 15 years, major organized crime groups – sometime mistakenly called “cartels” – have gone from a handful of 5 or 6 major organizations to upwards of 20 depending on how one counts the splinter groups.  Groups such as the Juarez Cartel, Zetas, Familia Michoacana, Knights Templar, Arellano Felix Organization, and Beltran Leyva Organization, to name a few, have all seen their leadership killed, arrested, and, in some cases, extradited to the United States.  However, this strategy has not proven very effective. As these criminal organizations have splintered, they have, in many instances, reconstituted into smaller, equally powerful, and violent groups.

This is reflected in the alarming increase in violence Mexico has suffered in recent years. So far this year, homicides are up nearly 25 percent compared to last year, and if the trend line continues, 2017 could be the most murderous year in history, exceeding the previous record in 2011.  Not all homicides are caused by drug trafficking, but it is clear that conflict and competition between criminal organizations is a major contributor.

More significantly, data from official U.S. sources suggests that despite considerable effort by both countries, the percentage of cocaine entering the United States through Central America and Mexico has barely budged.  One might expect that interdiction efforts in the Mexico-Central America corridor might push more trafficking into the Caribbean, the so-called balloon effect, but the evidence seems to suggest otherwise.  The United States reported that around 95 percent entered the country through the Meso-American corridor in 2010 and, while there have been slight fluctuations, the latest report for 2016 found 90 percent is still entering through the same corridor.  Early information about 2017 suggests a similar trend. 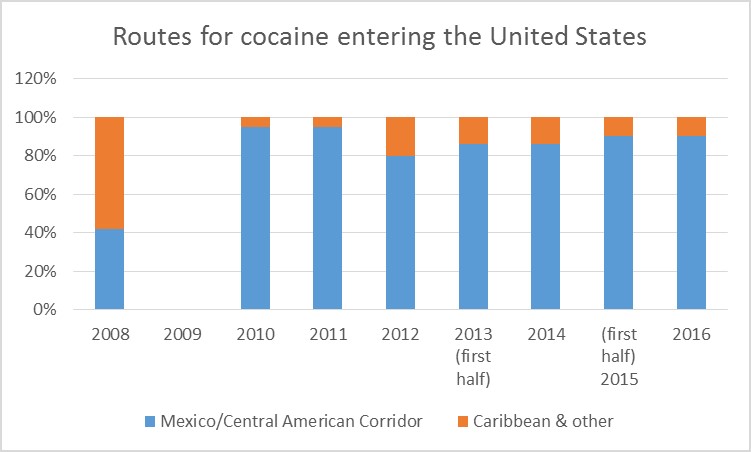 Thus, the evidence is mounting that the strategy of breaking up criminal networks is not effective when it comes to stopping drugs, and it often leads to greater violence. And extreme violence can have a long-term coercive effect on every aspect of society – economy, governance, social relations, and personal development – and, if left untreated, it can destabilize an entire society and country.  That would not be in the United States’ interest.

So, it may be time to gather the experts (inside and outside of government) to take an honest look at what has been accomplished, what works, and what does not.   Simply legalizing drugs does not address the long-term health costs.  It is time to admit we do not have all the answers and that we need to be smarter about what we are doing.   Some of the issues that should be considered in such a rethink about U.S. and Mexican policy include the following:

Do not focus narrowly on stopping drugs and decapitating criminal organizations.  Focus instead on strengthening the capacity of governments to provide security for its citizens.   Improving policing is one element of this strategy but so is strengthening prosecutors and judges to act autonomously – free of political interference.  Prison reform is also urgently needed.

Fighting corruption is an indispensable element of this strategy.  Government institutions are crippled by corruption, and it is hard to succeed when the institutions of government are not functioning properly.

Think more about solving the particular crime problems of a specific place.  Mexico has never developed a truly local approach to fighting crime and reducing violence.  The problems go well beyond drugs and include extortion, human smuggling and trafficking, gender-based violence, and kidnapping.   These each require a specific strategy that begins locally but is supported by state and federal authorities.

Citizen groups also have an important role to play in both reporting crime but holding government accountable for what it does.  An active and engaged citizenry can assist law enforcement by reporting crime and corruption as well.

All of these strategies require a long-term approach.  Building strong and independent prosecutors takes more than passing a law; it is a change in institutional culture and public expectations.

Finally, the United States has to look seriously at its own consumption problems.  Imprisoning people for consuming drugs has not significantly lowered demand.  Access to better mental health benefits, emergency services, counselling, and drug treatment centers are a much better approach.

Secretary Tillerson’s overture to Mexico and invitation to come to Washington to discuss these topics is an extraordinary opportunity. However, this is not the time to simply double down on the old strategy, try harder, and engage in yet another war on drugs.  It is time to learn important lessons from what has not worked, so we can approach these serious problems with a smarter and results-oriented strategy.

Publication
Security and Defense
Wilson Memo: The Relationship Between Russia & the Baltics