Russia's Economy Turns to a Blast from the Past: The New Economic Policy

NEP suddenly is back in vogue but in a global economy, NEP’s uniquely domestic approach to solving economic problems may send out the wrong message at the wrong time to the international business community, writes Will Pomeranz.

A wave of Soviet nostalgia has swept Russia over the past few years. So it is not surprising that in a time of economic trouble, Russian commentators have added Lenin’s New Economic Policy (NEP) to their current political vocabulary. NEP ironically provides justification to competing economic viewpoints. It also carries troubling undertones for Russia’s broader participation in the global economy.

NEP was born out of economic and political necessity in 1921, when an exhausted Soviet Union reintroduced market-based reforms to ease the transition between capitalism and socialism. Joseph Stalin famously abandoned NEP at the end of the 1920s, replacing it with a campaign of forced collectivization and rapid industrialization in an effort to build “socialism in one country.”

NEP suddenly is back in vogue with several recent headlines referring to the possibility of a “new economic policy.” NEP’s great appeal is that it provides a specific Russian framework to an ongoing economic debate, a potential useable past to justify a variety of policies. Ironically, both sides of the current debate—state thinkers and free marketers alike—are taking economic solace in NEP. In a global economy, however, NEP’s uniquely domestic approach to solving economic problems may send out the wrong message at the wrong time to the international business community.

The competing visions of NEP have been on public display in Russia’s leading newspapers. Kommersant announced in early June that Igor Sechin, the chairman of the state-owned oil company Rosneft, had proposed a Russian “NEP” for the energy sector. The article highlighted Sechin’s plan to diversify Russia’s energy market but also to make sure that only majority-owned Russian companies controlled these resources. Sechin further made a pitch for the creation of a national ratings agency so that Russia no longer would have to rely on foreign agencies to assess the creditworthiness of national companies.

In April, the business newspaper Vedomosti published an article that called for a “new economic policy” in light of current Russian stagnation. The article placed Russia’s choice in rather stark terms—either allow private business to spur economic growth, or have a less open, more state-controlled economy.

Mikhail Prokhorov, the Russian oligarch and owner of the Brooklyn Nets, has gone so far as to propose a NEP 2.0. In his manifesto, Prokhorov bemoaned the vast expansion of the post-Soviet bureaucracy, emphasizing how the current model of state investment and administrative control had failed to produce economic growth. Prokhorov called for a radical rethinking of the current economic and political paradigm that would include the reform of the banking sector, lower taxes, decreased government spending, a revived property market and increased national productivity.

Why NEP, and why now? For titans of state industry like Sechin, NEP provides a justification for the status quo and the Russian state’s continued control over the “commanding heights” of the economy. After all, while NEP may have allowed for the return of small-scale traders and retailers, the Communist Party never considered surrendering its control of Russia’s raw materials and major industry. Similarly, Putin has pursued his own form of state capitalism that dominates Russia’s most profitable sectors, and he shows no signs of abandoning this strategy.

Yet the NEP experience has been co-opted not only by statist thinkers, but also by other more market-oriented liberals, such as Prokhorov. For them, NEP represents economic flexibility, a policy that rewards private initiative and promotes the development of Russia’s small- and medium-sized enterprises. This sector currently is the most depressed—and overregulated—part of the Russian economy. Boris Titov, Russia’s business ombudsman, recentlyannounced that government inspections alone drained an estimated $35 billion from the economy in 2013.

A twenty-first century NEP, therefore, does not only rationalize reinforcing the commanding heights of the economy, it equally holds open the prospect of reviving the country’s entrepreneurial spirit. Russian policy makers and pundits—on either side of the spectrum—would be wise, however, to examine NEPs’ actual economic results, for they are unlikely to back up anyone’s claims. The Soviet economy recovered to pre-1913 levels during NEP, but it did not grow significantly beyond its pre-WWI capacity. So NEP analogies may not be all that user-friendly as a source of answers to current economic problems.

NEP carries a broader historical message as well, mainly because of what occurred in its aftermath. NEP ended largely because in the absence of the much-anticipated world revolution, Stalin decided that the Soviet Union would go it alone and build communism on a national, not international, level.

The Ukraine crisis and resulting sanctions have shown just how integrated today’s Russia is with the world economy. Nevertheless, Putin’s post-Crimea economic policies consistently have proposed national solutions that portend a more isolated, inward-looking Russia. The most dramatic example of this retrenchment is the law introducing crippling financial restrictions on MasterCard and Visa before the establishment of an alternative payment system. One wonders how Russia can stay connected with the global economy if foreign visitors and Russian tourists cannot use their credit cards inside and outside the country, respectively.

Furthermore, legislation has been discussed that would prohibit U.S. consultants from working with Russian state firms, stop Russian state firms from holding accounts in foreign banks, and forbid foreign financial institutions from advertising in the Russian Federation. Putin also continues to push a unilateral deoffshorization program that seeks to tax the offshore earnings of Russian-owned companies—a bureaucratic, legal and jurisdictional nightmare that will only further decrease Russia’s attractiveness as a destination for foreign investment.

Thus, in light of Russia’s current trends, references to NEP carry a subtle warning, a last chance to change course before ideology overwhelms more-pragmatic economic solutions. Yet as several former finance ministers have recently noted, Putin is not one for turning. Mikhail Zadornov, Boris Yeltsin’s minister of finance from 1997-1999, recently called for less direct state involvement in the economy, while recognizing that structural reform in Russia essentially stopped in 2004. Alexei Kudrin, Putin’s finance minister during his first two terms, has argued that Russia presently lacks the political will to address its fundamental economic difficulties.

NEP today means different things to different people. It can be used to defend the status quo and the outsized role that the Russian state currently plays in the economy, as well as to call for major market-orientated reforms. NEP also serves as a cautionary tale of what awaits Russia if it abandons established economic norms in the pursuit of narrow ideological objectives.

Ultimately, one person will decide what path Russia takes. And that remains the root of the problem.

William Pomeranz, the Acting Director of the Wilson Center’s Kennan Institute, is an expert guide to the complexities of political and economic developments in Russia, particularly through the lens of law. He leverages extensive, hands-on experience in international and Russian jurisprudence to address a wide range of legal issues, from the development of Russia’s Constitution to human rights law to foreign investment and sanctions. He is also the author of Law and the Russian State: Russia's Legal Evolution from Peter the Great to Vladimir Putin (Bloomsbury, 2018). 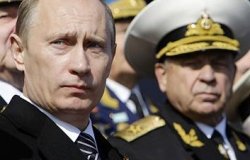