Strengthening the MACCIH: Next Steps in Honduras’ Fight against Corruption and Impunity

The next few weeks will be critical in the fight against corruption and impunity in Honduras. The Organization of American States (OAS) will send a technical mission to Honduras next week to begin fleshing out the details of the proposed Support Mission Against Corruption and Impunity in Honduras (MACCIH). Will the final agreement between the OAS and the gsovernment of Honduras — which is to be finalized in December — include the political independence necessary to tackle difficult, politically sensitive corruption cases, or will it simply provide window dressing that covers the cancer growing on the Honduran state?

The next few weeks will be critical in the fight against corruption and impunity in Honduras.  The Organization of American States (OAS) will send a technical mission to Honduras next week to begin fleshing out the details of the proposed Support Mission Against Corruption and Impunity in Honduras (MACCIH). Will the final agreement between the OAS and the government of Honduras — which is to be finalized in December — include the political independence necessary to tackle difficult, politically sensitive corruption cases, or will it simply provide window dressing that covers the cancer growing on the Honduran state?

As we discussed in our first post, in its current form there are a number of troubling aspects of the OAS mechanism, including the deeply flawed “national dialogue” process that resulted in the current proposal. Furthermore, the calls for additional evaluations of the justice system are redundant and wasteful, and the apparent lack of political independence for the MACCIH’s investigative mechanisms is potentially fatal to its mission.

Despite these challenges, there are a number of fixes that, if fully implemented, could potentially salvage the MACCIH and turn it into a mechanism with real teeth. Below we highlight some of these ideas. These recommendations are not merely our thoughts on best practices moving forward, but are based on proposals already made by Honduran civil society as well as the experiences of other countries in the region whose fight against corruption and impunity has had discernable and positive impact (Please see our attached graph for more detail).

1. Ensure the political and technical independence of the MACCIH: The MACCIH needs political independence in order to effectively address corruption. The current proposal does not adequately address this issue, raising concerns over whether the Mission will have the ability to pursue its own cases independent of the political and economic pressures that already undermine the Honduran justice system. One important element to ensure this independence is naming the right person, with a proven track record in the field of justice, to head the MACCIH. Rumors that a German lawyer with a long history of human rights work in the region were initially well received but quickly denied by the Honduran government. Transparency in naming the MACCIH chief of mission is imperative to getting off on the right foot. This needs to be a bold choice that is supported by civil society, the government, and the international community.

Furthermore, ensuring a strong role for the international jurists and prosecutors that will advise the Mission is essential. At present their role is ambiguous at best. The current proposal simply states that they will “accompany and strengthen” the Honduran justice system. What exactly this means and how this will occur need to be worked out with great care. If the MACCIH is not independent and the international experts have an undefined and secondary role, chances of success are remote.

In the case of Guatemala, one of the CICIG’s greatest strengths is its ability to select and investigate its own cases. Politically independent international prosecutors and investigators work alongside the Guatemalan Attorney General to provide technical and scientific evidence around specific cases that can then be used by local judicial institutions to prosecute the case.

Moreover, the presence of international experts provides a buffer from the political pressures that often accompany high-level corruption cases. The embattled Honduran Attorney General (AG) faces many political opponents angered by his efforts to prosecute the current Vice-President of Congress, who is now under house arrest, as well as the questionable circumstances of his appointment. Given his political isolation within Honduras, he is reportedly eager to work with and accept the technical and investigative capacities of the international prosecutors accompanying this process. The opportunity to work collaboratively with Honduras’ AG should not be taken lightly and could, in fact, be essential to the success of the Mission. Additionally, the international experts can provide a check on any effort by the AG to avoid the difficult task of investigating sensitive cases.

2. Implement past recommendations for reform: As we discussed in our last post on the MACCIH, there have been many institutional evaluations of the Honduran judiciary and security forces in the past five years (including two by the OAS itself). To commission another study and evaluation of the judicial system, even one conducted by the highly regarded OAS Center for the Study of Justice in the Americas (CEJA), seems wasteful and may ultimately delay any real action for reform. The recommendations that have already been made are a good baseline upon which to begin work now! What justifies further delay?

3. Effectively involve civil society in the implementation of MACCIH: Point #5 in the OAS proposal calls for the formation of an “Observatory for the justice system.” The proposal suggests a broad area of action for the observatory, made up of academics and civil society organizations. Its principal objective is “to supervise and promote the adequate implementation of reforms to the criminal justice system.” This is an excellent and necessary objective, but it is not at all clear that, as currently conceived, this goal can be accomplished. For example, as we have pointed out, the justice sector reform recommendations made by the OAS that are to be implemented under MACCIH (see #2 above) are not publically accessible. It is commendable to call for civil society oversight and involvement, but if civil society does not have access to basic information and is kept at arm’s length by the government, it is simply an empty promise.

Civil society oversight and input are critical components of effective anti-impunity mechanisms elsewhere in the region. In the case of Mexico, the International Group of Independent Experts (GIEI) that investigated the disappearance of 43 students from Ayotzinapa, Guerrero resulted from requests by the victims’ families and from civil society that the case be reopened. Because the GIEI responded directly to citizen demands, it was perceived as legitimate by a public skeptical of the “official story” provided by the then-Attorney General of Mexico. The GIEI enjoyed a great deal of local support, and their initial report was well received, resulting in the reopening of the case.

Conversely, as we discussed in our first post, the process that resulted in the current MACCIH proposal has been opaque at best, leading many to believe its was a pre-arranged deal between the government and the OAS envoy. If the MACCIH is to regain credibility with the Honduran public it must create a public forum within which Honduran civil society can participate in a meaningful way and not after decisions are made. For example, civil society (and particularly the Honduran opposition group Los Indignados) was only invited to comment on the MACCIH after the OAS and the government had signed the proposal.

It will be an uphill struggle in the next few weeks for the OAS to rectify these early missteps and persuade the Honduran public that the MACCIH is adequately responding to civil society’s concerns.

It will be an uphill struggle in the next few weeks for the OAS to rectify these early missteps and persuade the Honduran public that the MACCIH is adequately responding to civil society’s concerns. The process for civil society input must be clear and timely, transparency guaranteed, and access to documents — especially previous evaluations — must be made public by the government of Honduras. These steps should not be seen as a sign of political weakness on the part of the government but a sign of their commitment to making the tough decisions that are required to fight corruption and impunity.

While we raised some early concerns about the MACCIH, we nevertheless believe that, with a few tough and strategic decisions, the MACCIH can become a meaningful agent of change in Honduras. Other regional success stories, including ongoing efforts in Mexico and Guatemala, shed light on best practices that should be adopted in Honduras to make the MACCIH as effective as possible. Please see the accompanying graphic to get a better sense of how MACCIH stacks up next to other regional anti-corruption and anti-impunity mechanisms.

(Honduras Protest by rbreve is licensed under Creative Commons BY 2.0) 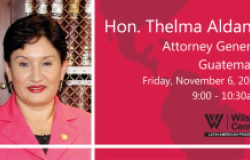