Curated by Natalia Moussienko and Andriy Sydorenko from the Modern Art Research Institute (MARI), Kyiv, Ukraine, the exhibit which was displayed in Kyiv in September 2014 is now traveling around Ukraine to different cities. Artists used multiple media for their works: painting, collage, assemblage, embroidery, photo, and video, but the exhibit presents the works in poster form. This is very symbolic. The Maidan witnessed a great explosion of all forms and genres of art, but posters were the most effective and popular. From original satirical works  to manipulated images from internet memes, the posters quickly reacted to and documented major developments during the course of 2013-2014.

“The Maidan events of 2014 shocked me. At first it seemed to me that art had died. Nobody needs beautiful landscapes if no one will see them because the eyes of the best young people in my country were closed forever. Then I decided to express this bitter truth in my new work. I mixed watercolor sketches and photos from the Maidan. I overlay asphalt, wheels, footprints, etc. onto the landscape. I want to say that reality is more than art, the Maidan is more art than a certain aesthetic activity. “Intrusion” was part of a series of works I made in 2014.” 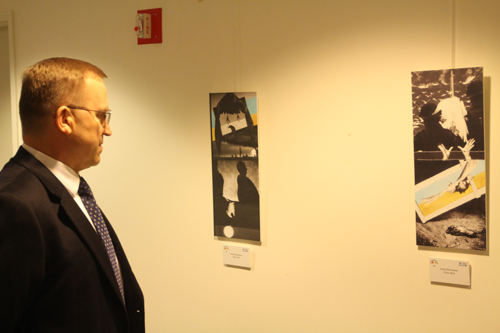 Ambassador of Ukraine to the U.S. Olexander Motsyk viewing works by Irena Khovanets

The Wilson Center would like to thank its co-organizers: the Fulbright Program and MARI, and also express its deep gratitude to the U.S.-Ukraine Business Council (USUBC), the Ukrainian Embassy, and private donors for their generous support that made this exhibit possible.