Latin American Program
Security and DefenseOrganized CrimeNational SecurityLatin AmericaCentral America
With "transnational organized crime" a growing concern and threat to security, what was once the pervue of local governments is increasingly a focus for the U.S. military. For example, many of the most effected nations in Central America lack the resources to adequately provide a level of security that matches threats to borders and citizens alike. To learn more about the situation in the region, we spoke with the man in charge. United States Air Force General Douglas Fraser serves as Commander of U.S. Southern Command, working with a variety of South and Central American governments in an effort to combat a host of criminal activities such as drug trafficking, smuggling, and kidnapping. Gen. Douglas M. Fraser is Commander, U.S. Southern Command, Miami, Fla. USSOUTHCOM is responsible for all Department of Defense security cooperation in the 45 nations and territories of Central and South America and the Caribbean Sea, an area of 16 million square miles. 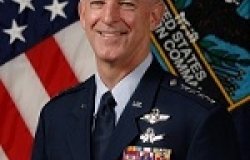