Heads of state gathered in New York for the September 19 United Nations Summit on Refugees and Migrants will reaffirm principles of international law, pledge to treat asylum seekers more humanely, and promise to improve coordination between humanitarian and development organizations.

Heads of state gathered in New York for the September 19 United Nations Summit on Refugees and Migrants will reaffirm principles of international law, pledge to treat asylum seekers more humanely, and promise to improve coordination between humanitarian and development organizations.

That will offer little immediate comfort, however, to Eritreans and Libyans crossing the Mediterranean in leaky boats; South Sudanese fleeing the ethnic violence tearing their new country apart; or Syrian refugees marooned in Turkey, Lebanon, or Jordan who see no realistic prospect of returning home any time soon.

Even the more concrete commitments likely to be announced the next day at the U.S.-organized Leaders’ Summit on Refugees – higher refugee resettlement quotas (including a reported significant increase in U.S. admissions), increased humanitarian funding, and more educational and vocational opportunities – will have only limited impact on the most vulnerable of the world’s 21 million refugees and 42 million other forcibly displaced persons.

That said, the meetings will constitute modest steps forward. The “New York Declaration” to be adopted at the September 19 meeting will reaffirm core humanitarian principles. That can encourage responsible countries not to backslide and goad less principled governments to behave better (not because they necessarily care about UN declarations, but because responsible countries can defend the agreement by imposing diplomatic costs on scofflaws). This is timely, given anti-refugee sentiment globally, including in Western democracies that traditionally have been most supportive of the United Nations High Commissioner for Refugees.

The New York Declaration reads like the messy compromise it is. The text includes qualifications, opt-outs, and fuzzy language (including this sentence, which would have driven E.B. White to tears: “We also recognize that international migration is a multidimensional reality of major relevance for the development of countries of origin, transit and destination which requires coherent and comprehensive responses.”). Its focus on refugees and migrants comes at the expense of attention to the fate of internally displaced persons, who are often even more vulnerable than refugees, if they cannot flee violence or oppression across an international border.

The September 20 summit will be more newsworthy and will be touted as a significant U.S. diplomatic achievement. Co-hosted by President Obama, UN Secretary-General Ban Ki-moon, and leaders from Canada, Ethiopia, Germany, Jordan, Mexico, and Sweden, the summit aims to increase humanitarian funding by 30 percent, double the number of refugees resettled in destination countries, and increase the number of refugee children in school and refugee adults with legal permission to work by 1 million each.

Even for skeptics of multilateral diplomacy – a club of which I am sometimes a member – it will be encouraging if the commitments are precise and concrete, and implementation can be tracked and verified.

Whatever the merits of the New York meetings, even their proponents would concede they are insufficient. The current refugee system is in crisis, and not just because the number of people on the move in 2016 – fleeing war, atrocities, and chaos – is larger than at any time since the Second World War.

There is also a crisis of confidence, especially in Europe and North America – nagging worries that intractable conflicts will never permit decades-old refugee populations to return home; that large numbers of refugees cannot be assimilated in a safe, orderly, and economically beneficial way; that the backlash against asylum seekers fomented by demagogues will degrade our institutions and politics; that differences in asylum policies and beggar-your-neighbor competition will lead a race to the bottom that reduces refugee protections; that humanitarian funding requirements will continue to get more expensive; and that, after incompetent foreign interventions and spasmodic nation building, the world’s democracies still don’t seem to know how to build cohesive societies out of conflict-wracked, oppressive, or anarchic ones.

To get at these thornier challenges, the United States, with its allies, will need to ask tough questions about whether international law, the organization of the humanitarian community, and our current policies are appropriate and adequate to address today’s refugee mega-crises.

We should consider whether our emphasis on the responsibilities of states and international organizations distracts us from a more refugee-centric process that would treat refugees as potential assets to be cultivated and harnessed, not just problems to be solved (or ignored). And we desperately need to improve our understanding of the risks and rules of nation building.

There are at least 65 million people waiting for us to get this right. 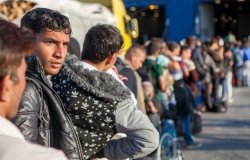