When Do Protests Succeed? The Case of Iran and the Arab World

Iran is in the midst of an uprising precipitated by women. Women across Iran are protesting the attempt of President Ebrahim Raisi’s government to re-impose strict hijab rules, as well as the death of Mahsa Amini, a young woman who was arrested for wearing the hijab improperly and was subsequently killed while in police custody. Since her death, the wave of protests has spread across the country and included people of all walks of life. The Tehran and Shiraz bazaars closed for a day in solidarity with the demonstrators, and the workers in parts of the petrochemical industry in the south went on strike on October 10 also to show their support.

The current protests are only the latest in a long series that started with the 1979 revolution led by Ayatollah Ruhollah Khomeini. The uprising was successful in overthrowing the shah, but soon after, Iranians discovered that the Islamic Republic did not lead to the freedom, economic prosperity, or justice they expected, and disappointment began to set in. In just a few months, women were out in the streets to protest the imposition of the mandatory hijab. They were supported by a handful of men but opposed by a large crowd.

Their attempt to change the hijab law didn’t go anywhere; however, the spirit of protest persisted. In 2009, hundreds of thousands of people crying, “where is my vote?” came out into the streets to protest a presidential election rigged in favor of the government favorite, Mahmoud Ahmadi-Nejad, and defeat of Mir-Hossein Moussavi, a former prime minister, the Green Movement candidate and popular choice. As the demonstrations grew larger, the military stepped in to arrest, imprison, torture, and kill protestors. In those demonstrations, a young woman, Neda Agha-Soltan, became the face of the uprising after she was killed by a plain-clothes policeman. In 2017 and 2018, demonstrations took place over the high cost of living and low level of income. Demonstrators even called for the Supreme Leader to step down. In 2019, high petrol prices were the cause of widespread protests. Despite the courage and determination showed by Iranians, particularly Iranian women, who took part alongside men, all these protests failed to bring about change. The only successful uprising so far has been that led by Ayatollah Khomeini.

The outcome of these movements was limited, despite the initial high hopes generated by the willingness of people to take to the streets in open defiance of their government.

The Arab countries had a similar experience in the past two decades, with popular mass movements that did not succeed in bringing about the desired change. Beginning in December 2010, a wave of uprisings swept through Tunisia, Egypt, Syria, Libya and Yemen. A second wave involving Algeria, Sudan, Iraq, and Lebanon started in 2018. The outcome of these movements was limited, despite the initial high hopes generated by the willingness of people to take to the streets in open defiance of their government. Some managed to force the incumbent government out of power, but not to install new, more democratic regimes. In the most tragic cases, Syria, Libya and Yemen, the outcome was wars that have still not abated. In the most successful countries, Tunisia in the first wave and Sudan in the second, there was some progress towards democracy, at least temporarily.

The importance of organizing

What explains why the Khomeini revolution succeeded and all other uprisings in that country failed? Or why did protestors in Tunisia and Sudan have some success while they failed elsewhere?  The key factors, closely connected, appear to be leadership and the existence or emergence of organization among the protesters. Spontaneous uprisings can draw huge crowds demanding change, produce dramatic pictures and make headlines across the world, but in the absence of strong organization and leadership, they eventually succumb to government repression.

The protests and demonstrations that led to the 1979 revolution were highly organized and persisted for almost a full year. Millions of protesters calling for change came out on the streets in towns and cities across the country. Widespread strikes in the oil industry, government ministries and other sectors, in addition to bazaar shutdowns, disrupted day-to-day life and paralyzed the economy and government activity. The clergy, led by Ayatollah Khomeini from exile in Iraq, was instrumental in organizing mass marches; their followers distributed leaflets and cassette tapes of Khomeini’s statements. The mosques became foci for political organization, and the leading clerics in towns and cities used Friday sermons to arouse their congregations and spur them into opposition activities.

Most importantly, independent, organized civil society forces like the labor unions, that had made possible the initial transition, did not intervene this time.

In Tunisia, protesters were organized from the beginning because of the intervention of the labor unions. Meanwhile, the government side was in disarray, with the president leaving the country and failing to offer leadership. The outcome was an orderly process of electing a constituent assembly, in which political parties, including the Islamist Ennahda, played an important role. Despite setbacks at times, the democratization process seemed to be underway and for almost ten years, Tunisia was seen by many as an emerging success story for democratic transformation. But a new president, Kais Saied, intent on reviving the early unfettered power of the Tunisian presidency, thus his own power, put an end to the hope for democracy in July 2021 by suspending the parliament and curbing the role of political parties. The resurgence of authoritarianism was greeted with dismay by many Tunisians, although not necessarily by a majority. Most importantly, independent, organized civil society forces like the labor unions, that had made possible the initial transition, did not intervene this time. Tunisia is likely to return to the pre-2010 autocratic rule.

In Sudan, the initial spontaneous and loosely organized groundswell of rage against the military regime was transformed into an effective movement by the intervention of the professional associations, which had a long history of political activism. Coming together as the Forces of Freedom and Change, these groups managed to negotiate a complex transition process with the military, including protracted periods of power sharing. The agreement, if fragile, has been challenged by the military, but so far, the civilian forces have been able to withstand the threat.

What are the short- and long-term prospects for the current protest movement? On one hand, there are signs the protests are spreading and growing in significant ways. Every day, new groups join the demonstrators and their supporters. Famous Iranian actors and actresses, athletes, artists, academics, and members of Iran’s Bar Association have declared their support for the protestors. They have also called on the government to stop the killing of demonstrators and for the release of all detainees, including students, women journalists, activists, and others.

The prospects for organization and leadership are not good, because it is clear that the [Iranian] government will immediately move against any identifiable groups or leaders.

On the other hand, the prospects for organization and leadership are not good, because it is clear that the government will immediately move against any identifiable groups or leaders. The head of the judiciary, Mr. Gholamhossein Mohseni- Ejei, invited the demonstrators to come forward to discuss their grievances. None of the protesters will probably heed this vague invitation to talk, considering it a ploy to identify any leaders of the protests and knowing full well that once such leaders come forward, they could eventually be arrested, imprisoned, and put on trial. In fact, within two days of issuing his invitation to the protesters, Mr. Mohseni-Ejei urged judges to “show no weakness” when demonstrators are brought before them. History shows that without organization and leadership, prospects for success are dim.

The strikes and shutdowns will probably multiply. However, as made clear in the Supreme Leader’s remarks a week ago and reiterated on Wednesday, the government is determined, once again, to crush all dissent by all the force it has at its disposal. It is too early to say how it will all end. 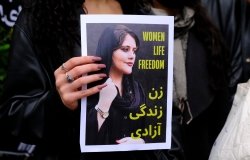