The Wilson Center dispatched several of its leading experts and scholars to the 2017 Concordia Annual Summit, held on the sidelines of the UN General Assembly in New York on September 18-19. Wilson Center President Jane Harman, who also serves as a member of Concordia’s Leadership Council, featured in two days of high-level panels and discussions. She was joined by Mexico Institute Director Duncan Wood; Women in Public Service Project Director Gwen Young; Senior Fellow Sherri Goodman; and Lauren Herzer Risi of the Environmental Change and Security Program.

The Wilson Center dispatched several of its leading experts and scholars to the 2017 Concordia Annual Summit, held on the sidelines of the UN General Assembly in New York on September 18-19. The forum convenes top influencers and decision-makers from across sectors to foster partnerships on issues impacting the United States and the world at large – from global development goals to post-conflict scenarios to environmental security and more.

Jane Harman and Christine Lagarde on Breaking the Glass Ceiling

Wilson Center President Jane Harman addressed the importance of women’s empowerment as a driver of global development alongside IMF Managing Director Christine Lagarde at a plenary session on September 19.

President Harman noted that increased efforts have been made in recent years to highlight and support women in leadership positions, but not enough attention is being paid to “women in the middle and those coming up from behind.” An empirically grounded picture of women in public service around the world is needed to help bridge the gender gap, she said – a resource that the Wilson Center’s Women in Public Service Project created with its 50x50 initiative. The groundbreaking enterprise presents more than 2,000 data points from 186 countries to illustrate what is needed to increase the percentage of women in public office to 50% by 2050.

President Harman and Managing Director Lagarde also discussed their experiences of success and failure as women in leadership positions, underscoring the importance of instilling confidence in women at an early age, including through role models. President Harman also underscored the work of the Wilson Center’s Africa Program, which has prioritized the topic of women’s rights and empowerment in its programming and publications. She noted the work of recent Wilson Center Distinguished Fellow and former President of Malawi Joyce Banda, who published a policy toolkit for advancing women’s leadership in Africa while at the Center. 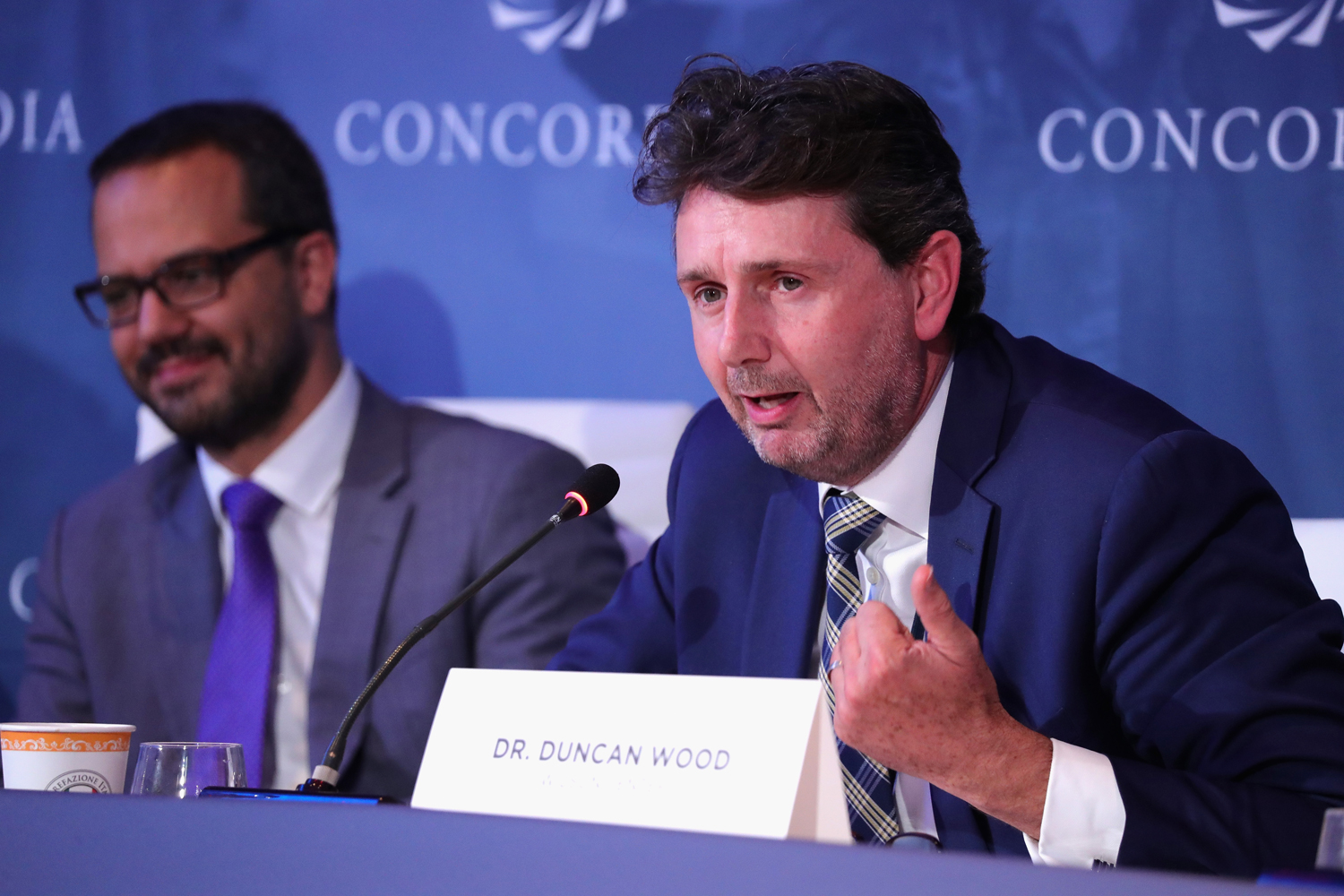 Investment, and the political and social considerations that go with it, was the theme of presentations by Duncan Wood, the director of the Wilson Center’s Mexico Institute, on September 18.

“We have a tendency to oversimplify the link between investment and peace. When done right, it can have a positive reinforcing effect. When it’s done wrong, it leads to stagnation at best, and at worst, it leads to further conflict,” he said.

The Mexico Institute’s work has led to the conclusion that investment in the aftermath of a conflict is most constructive when the private sector works hand-in-hand with the three levels of government as well as with civil society and the media.

Wood also discussed the links between investment, resilience, and society’s trust: “Resilience depends on trust and trust is a delicate, magical element that takes gigantic, heroic efforts to create – and as little as a misunderstanding or an offhand comment or a poorly planned investment project to destroy.” Unrealistic expectations of what investment can achieve can also be highly destructive to resilience and trust, he added.

The Political Implications of Economic Change

A panel on the future of the workforce focused on the implications of automation and artificial intelligence across economic, social, cultural, and political dimensions. The general consensus was that while millions of job may be lost, millions more are likely to be created – a recipe for long-term, macro-level stability and growth, but enormous disruption in the short term.

“What worries me the most in the short term is the political reaction to this fundamental economic change,” Wood said. “It will be felt not in the sense of a reaction to automation, but rather, against other societal and economic phenomena. A case in point today, here in the United States: anti-trade and anti-immigrant sentiment are tied directly to the painful economic adjustment being caused by automation in the manufacturing and other sectors. These reactions act as powerful political drivers for an agenda that favors closed, rather than open, economies and societies.”

He referenced the Mexico’s Institute’s North American Workforce Development Project, to be launched in early 2018. Led by Global Fellow Amb. Earl Anthony Wayne, it will identify public policy strategies at the regional level to help governments, business, and civil society overcome the skills gap and expand economic opportunity to more segments of the population.

Achieving gender parity in public service leadership is critical to promoting economic growth and sustainable development globally, Gwen K. Young said during a roundtable discussion on women in government. Yet, despite the benefits of equal representation, the director of the Women in Public Service Project noted, there is no comprehensive picture of where women hold, and do not hold, decision-making roles in public service around the world.

During the September 19 event, Young previewed the next step in her Project’s ongoing work to fill this critical gap in existing knowledge by providing a multifaceted view of women’s leadership across sectors. The Global Women’s Public Leadership Index, set for a preliminary rollout in October, measures where women are in public service leadership, how they got there, and the power they hold in their positions across countries and sectors of government.

Young presented the framework and some of the initial findings of the Index, noting evidence of underrepresentation for women in the legislative, judiciary, and civil service sectors. Before leaders from the policy, business, and civil society spheres, Young underscored the importance of sex-disaggregated data-collection to inform policies and practices globally. “We need to bridge the divide between public- and private-sector leadership. Women leaders in one sector can make important contributions in the other," she said.

A report by the journal Science Advances indicates that two-thirds of the world's population suffers from extreme water scarcity at least one month out of every year – and due to factors like weak governance and institutions, overburdened infrastructure, high unemployment, ongoing conflict, poverty, and health crises, the communities most threatened are already among the world’s most fragile. In fact, two-thirds of USAID's water priority countries are suffering from active armed conflict or recovering from recent violence.

The Wilson Center's Lauren Herzer Risi, senior program manager in the Environmental Change and Sustainability Program, chaired an expert panel on September 18 to consider the nexus between water and national security, and specifically, how to minimize the conflict-causing potential of water stress. Panelists agreed on the need for committed U.S. leadership and a “whole-of-government approach.” For several decades, the U.S. has lacked a coherent strategy for addressing water stress, several of the panelists noted. Providing communities with infrastructure is unsustainable if governance mechanisms and institutions to manage the resources effectively are missing from the equation, Herzer Risi noted. In those cases, the well will eventually run dry, literally. She welcomed Washington's anticipated release its first Global Water Strategyin October.

But governments can't fully address the problem on their own, Herzer Risi said. A 2016 World Bank analysis estimates that reaching UN Sustainable Development Goal 6, “achieving universal access to basic water, sanitation, and hygiene services by 2030,” will come at a cost of $454.4 billion. “The private sector is already playing a critical role in global development, and public-private partnerships will continue to lead the charge,” Herzer Risi said.

“We’d like to put hydrodiplomacy on steroids right now, because we believe that in many conflict-ridden parts of the world, if we resolve water issues, we can help stabilize that region,” Wilson Center Senior Fellow Sherri Goodman said during a Facebook Live interview on the sidelines of the panel.

Goodman, who served as the first U.S. Deputy Undersecretary of Defense for Environmental Security, argued at water should be elevated to the level of national and global priority. She noted emerging changes to water availability and accessibility in areas of strategic interest to the United States and the resulting national security concerns for Washington and its allies.

The United States is well-positioned to act, Goodman said: to elevate hydrodiplomacy, the president should establish a public-private center for water conflict prevention, which would mobilize governmental action as well as enable the private sector to be an essential dimension of the economic opportunities created.

Beyond the “3Ds” approach of defense, development, and diplomacy, the U.S. should further develop its growing water data capabilities, including at the National Water Data Center, Goodman recommended. She noted that NOAA, NASA, and USGS have the ability to generate accurate and openly accessible water data that can inform decision-making at all levels of government.

Finally, she encouraged the U.S. government to promote innovation and export through private-public partnerships with water and infrastructure companies, boosting commercial diplomacy and contributing to economic competitiveness and growth.

Goodman previously served as president and CEO of the Consortium for Ocean Leadership and is a member of the board of the US Water Partnership, among other posts.

She also participated in a panel on space diplomacy at the Concordia Summit, where she discussed space as part of the “global commons” and the need to promote cooperation and peaceful activity in this increasingly vital domain.