Several other works completed with the support of the Center were also highlighted in the distinguished journal, such as The Man Who Ran Washington: The Life and Times of James A. Baker III, by Peter Baker and Susan Glasser.

The full edited volume, tracing George F. Kennan's life and work as one of the most influential diplomats of the 20th century, is available for free download here. The recorded event of the volume's launch is available to watch here. 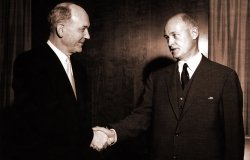