On March 29, Brazilian Lieutenant Commander Marcia Andrade Braga received the United Nations (UN) Military Gender Advocate of the Year Award for her outstanding work to increase gender awareness within her peacekeeping mission and for driving constructive engagement with local communities and female leaders.*

As the Military Gender Advisor for the UN Stabilization Mission in the Central African Republic (MINUSCA), Lt. Cdr. Braga has spearheaded efforts to engage with local women leaders to better understand how women are affected by conflict. Since assuming the role in April 2018, she helped to build a network of gender advisors among the Mission’s military units and led the development of mixed-gender teams for community patrols. It was not an easy task—just 4 percent of UN peacekeepers are women—and she had to help train and raise awareness among her colleagues as to the need for this type of work.

The mixed-gender teams proved critical in allowing the Mission to gather critical information to safeguard the diverse groups under its protection, especially those most vulnerable, who tend to be women. Lt. Cdr. Braga, a Naval officer, has found that local women are more comfortable speaking to other women: “The operations we have nowadays are precisely to contain violence and protect civilians. And when we have patrols and military actions with women, this facilitates dialogue and interaction with the community. There is much greater engagement and receptivity [by the community].” Women are often vulnerable to attack while on trips to find water or food; and frequently cannot identify aggressors who strike at home due to the lack of electric lighting. Based on interactions between patrols and local women leaders, Lt. Cdr. Braga helped develop projects to install solar panels, water pumps, and community gardens—initiatives that have a concrete, positive impact in the community and help keep women safe.

“Marcia Andrade Braga is a stellar example of why we need more women in peacekeeping. Peacekeeping works effectively when women play meaningful roles and when women in the host communities are directly engaged,” according to Under-Secretary-General for the Department of Peace Operations Jean-Pierre Lacroix.

Moreover, including women peacekeepers on patrols may also help reduce and prevent sexual assault, especially by peacekeepers themselves. MINUSCA has faced several serious allegations of sexual abuse by peacekeepers in recent years, undermining its ability to build trust with the communities it is mandated to protect. According to Lt. Cdr. Braga, the integration of women helps in identifying potential threats before they turn into action.

Lt. Cdr. Braga also argues compellingly that women peacekeepers are effective advocates for shifting gender perceptions on an individual level. In showing that women are as capable as men in security and leadership roles, women peacekeepers help change traditional views of gender roles. "It is not about wanting a woman on the mission just to have equality. It's because it produces results…[and] when you show the results, the prejudice begins to fade.”

When she leaves her posting with MINUSCA at the end of April, Lt. Cdr. Braga hopes to continue her work on promoting gender awareness, this time within the Brazilian Navy. After seven years teaching elementary school and earning a degree in system analysis, Lt. Cdr. Braga joined the Brazilian Navy, where she has served for eighteen years. She told Folha de S. Paulo that the Brazilian armed forces as a whole have been making positive strides towards greater integration. In a September 2018 speech at the Wilson Center, Admiral Eduardo Bacellar Leal Ferreira, then commander of the Brazilian Navy, affirmed that the Navy is committed to this effort and to encouraging female enrollment at the naval school. Last year’s graduating class from Brazil’s Naval School included a record of nine women, requiring the Navy to alter the physical layout of its 36-year-old training ship to include female sleeping quarters and bathrooms.

However, the growing role of women in the Brazilian Navy and other branches of the armed forces has come even as women have faced setbacks in other areas. Among the twenty-two cabinet ministers that compose President Jair Bolsonaro’s administration, only two are women: Tereza Cristina, who leads the Ministry of Agriculture; and Damares Alves, who leads the Ministry on Human Rights, Women and the Family.

Against this political backdrop, the UN’s decision to honor Lt. Cdr. Braga’s work to advance gender equity and inclusion is especially meaningful. Her work shows that gender issues and security issues are not isolated lanes of policymaking: gender perspectives can improve security, and security policies can change gender inequalities for the better. Despite the challenges to this agenda in certain circles, including in official ones, gender equality is gaining prominence across Brazil’s government and society—even in non-traditional spheres such as the military.

*The United Nations has officially promoted the value of gender perspectives in peacekeeping operations since the Security Council Resolution on Women, Peace, and Security (UNSCR 1325) was approved in October 2000. The Resolution aims to prevent conflict, protect women’s and girls’ rights, and stimulate the participation of women in peacekeeping missions. The UN established the Annual Gender Advocate Award in 2016 to recognize the work of women who promote the principles established in the Resolution. 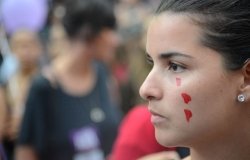