Argentine President Mauricio Macri has been one of Latin America’s loudest critics of the Maduro regime – a posture that has lubricated relations with the Trump administration. In the Lima Group and at the Organization of American States, he has propelled efforts to isolate and sanction Venezuela, and to bolster opposition leader Juan Guaidó, the National Assembly leader widely recognized as Venezuela’s interim president.

Mr. Macri’s views on Venezuela have been consistent, reflecting a distaste for the Bolivarian economic model and alarm over Venezuela’s worsening economic and humanitarian crisis, including blackouts and the spread of preventable diseases. Now, as Mr. Macri faces a brutal reelection campaign, his advisers hope his longtime efforts to address Venezuela’s collapse will yield political dividends.

In his state of the union in March, Mr. Macri cited Venezuela as he drew attention to Cambiemos’s sweeping foreign policy reforms. “Tenemos un rol importante para desempeñar en la comunidad internacional,” he said. He also previewed how he will wield the Venezuela issue to highlight a major policy difference between Cambiemos and its populist rival, former President Cristina Fernández de Kirchner. Ms. Fernández de Kirchner, after all, was famously close to Venezuela, as we have observed previously in the Weekly Asado. In 2013, for example, she awarded Nicolás Maduro the Orden del Libertador San Martín. Mr. Macri has called her alliance with Caracas one of the Kirchner-era “ejes de la política exterior de nuestro país.”

Mr. Macri’s Venezuela cudgel is not only designed to taint Ms. Fernández de Kirchner by her association with an Andean despot whose human rights record prompted a complaint to the International Criminal Court. It is also a warning to Argentine voters that a return to Kirchner-style Peronism risks putting Argentina on a path to Venezuela-style dystopia.

Will it work? It is not clear. After all, even in the heyday of chavismo, Latin American fearmongering campaigns that painted leftist candidates as the next Hugo Chávez yielded mixed results.

However, in Argentina today, the Venezuela crisis does appear to be a politically useful issue for the center-right government. Venezuela was the least popular country included in our latest ArgentinaPulse survey, with 83 percent of Argentines reporting a negative view. Moreover, Venezuela is not a partisan issue; opponents and supporters of Mr. Macri generally agree on their disappointment in the country, a onetime prosperous and democratic haven for Argentine exiles.

For Ms. Fernández de Kirchner, the comparison clearly puts her on the defensive: She is forced to address the democratic collapse of her onetime ally, while showing that her return to the Casa Rosada would not turn Argentina into an economic basket case unable to feed its people. (Under Mr. Macri, of course, Argentina’s economy has sputtered, but it is immeasurably healthier than the Venezuelan economic nightmare.)

So far, Ms. Fernández de Kirchner has largely remained silent. But her allies in congress have stood by Mr. Maduro, saying international efforts to install Mr. Guaidó constitute an attempted coup. That has deepened Ms. Fernández de Kirchner’s association with the Maduro regime, a potential liability in the election. It has also left her isolated within Peronism. Mainstream Peronists running for president, like Sergio Massa and Juan Manuel Urtubey, have fervently denounced Mr. Maduro. (In remarks at the Wilson Center in February, libertarian candidate José Luis Espert went further, calling for an armed intervention to remove Mr. Maduro.)

Demographics have also changed since Ms. Fernández de Kirchner developed close ties to Venezuela. From 2015 to 2018, Argentina’s Venezuelan population skyrocketed by 639 percent, as a result of Venezuela’s migration crisis and Mr. Macri’s migration policy changes. Though few of these Venezuelans will vote in Argentina’s October election, they are politically mobilized and would not welcome a candidate sympathetic to the regime they fled. 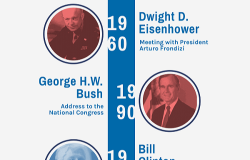