How Would Woodrow Wilson Captain the Fiscal Ship

Managing a budget is hard. Playing a game is easy. Doing both can get complicated.

The Fiscal Ship is a game designed as an accessible platform for the public to learn about the incredibly complex process of managing the federal budget. Created by the Serious Games Initiative at the Woodrow Wilson International Center for Scholars and the Hutchins Center on Fiscal & Monetary Policy at the Brookings Institute, part of what sets the game apart is that – while balancing the budget – you are also challenged to choose three value goals (e.g. fighting climate change, increasing national defense, cutting taxes) that set priorities, which guide their policy plan choices. Succeed at both managing the budget and achieving your goals, and you win the game. But here at the Wilson Center we thought “how can we challenge ourselves and make it even harder?”

The answer: see how our namesake President, Woodrow Wilson, would have handled it.

In order to play the game as President Woodrow Wilson, we first had to put ourselves in his mindset—walk a mile in his metaphorical (size 9) shoes.

In 1912, Wilson ran for president. The 1912 election was unique in modern day terms, with four candidates running from four different parties. At the time, the public was frustrated, as most people were largely cynical about the government’s ability to enable and manage change. Wilson ran on a campaign called the “New Freedom,” which aimed to reinvigorate democracy by restoring market competition and keeping big business from dominating government. Needless to say, this theme resonated with a disillusioned public, and he won the election with a large plurality of the vote.

“Reining in the trusts was a symbolic first step in reconstituting government along lines that Wilson had imagined…restoring government to the people meant restoring their prosperity, giving them time and energy to participate in public life; and that required opening the doors of the economic laboratory as wide as possible,” writes Trygve Throntveit, a historian who focuses on the intellectual and cultural roots and consequences of Wilson’s thought and policies.

Perhaps to the disappointment of those who elected him, Wilson’s first term focused more on taxation than on the anti-trust regime. He pushed through the Clayton Antitrust Act and the Federal Trade Commission Act, but is better remembered for shifting the American tax system in an extremely progressive direction. Fiscal responsibility came at the cost of promoting labor and human rights, with his domestic policies marked with such legislation as the passing of the Keating-Owen Act that outlawed child labor.

In 1916, it was time to run again. For Wilson’s second campaign, one of his main slogans was “He Kept Us Out of War,” a statement that, ironically, did not remain true for very long after reelection. A running theme throughout his second term was making sure the world was safe for democracy, which justified his decision to get involved in World War I.

His social and economic initiatives became more focused around the war effort, but often still fit the Progressive agenda. The government commandeered much of the economy, which meant the creation of new agencies to regulate industry, transportation, labor, and agriculture. The War Labor Board set quotas, prices, and standards, all while protecting the rights of workers by limiting the workday to 8 hours, raising minimum wages, and allowing for unionization of wartime industries.

What is key to note is that, like with many Presidents, Wilson’s presidency contained some tribulation and hypocrisy. Although on record for fighting for human rights, his landmark speech to Congress supporting Women’s Suffrage movement only came midway through his second term as a result of the war effort.

Wilson wavered on other important issues, like immigration.  During wartime, he adopted an attitude of assimilation and Americanization, and twice vetoed immigration restriction bills that had passed both houses of Congress, however this was not always his position. “It is just difficult to find any consistency, or a simple pattern, to his pronouncements, let alone ascertain a continuity in his attitude to immigration,” according to Kristofer Allerfeldt in A Companion to Woodrow Wilson. Compared to many of his most well-known opinions, like those on trusts, immigration and similar issues tend to take a backseat in historical discourse.

This tendency of his towards fluid views and opinions made game play difficult. Many difficult decisions had to be made before the game could even start, like which of these were most important to follow and how strictly.

Further, in attempting to play The Fiscal Ship from a Wilsonian point of view, there were some distinct difficulties in translating the 1900’s to the modern era, as the game was designed to reflect current policy options. Policies critical to the Wilsonian Era were not available in the game, such as the need for child labor laws. In the same vein, many policies central to the modern the federal budget, like Social Security, didn’t exist. It’s also worth noting that Wilson’s spending on the military and social programs put the United States over budget by as much as 127 billion in 1919 alone.

Playing the Fiscal Ship: What Would Wilson Do?

Given all this, we laid out some ground rules. First, the game was played with some of Wilson’s best-known opinions in mind, namely his position on strengthening the position of the nation in a World War I era, his anti-trust and anti-tariff stance, and his support for social programs. To reflect these values, we selected the goals of “Strengthen National Defense,” “Reduce Inequality,” and “Strengthen Social Safety Net.”

The next part was selecting the policy options that fit those goals, but also reflected Wilson’s specific platform – interpreted for today. Certain policies translated smoothly from Wilsonian Progressivism to modern times, like increasing income taxes and adding fees on big banks. 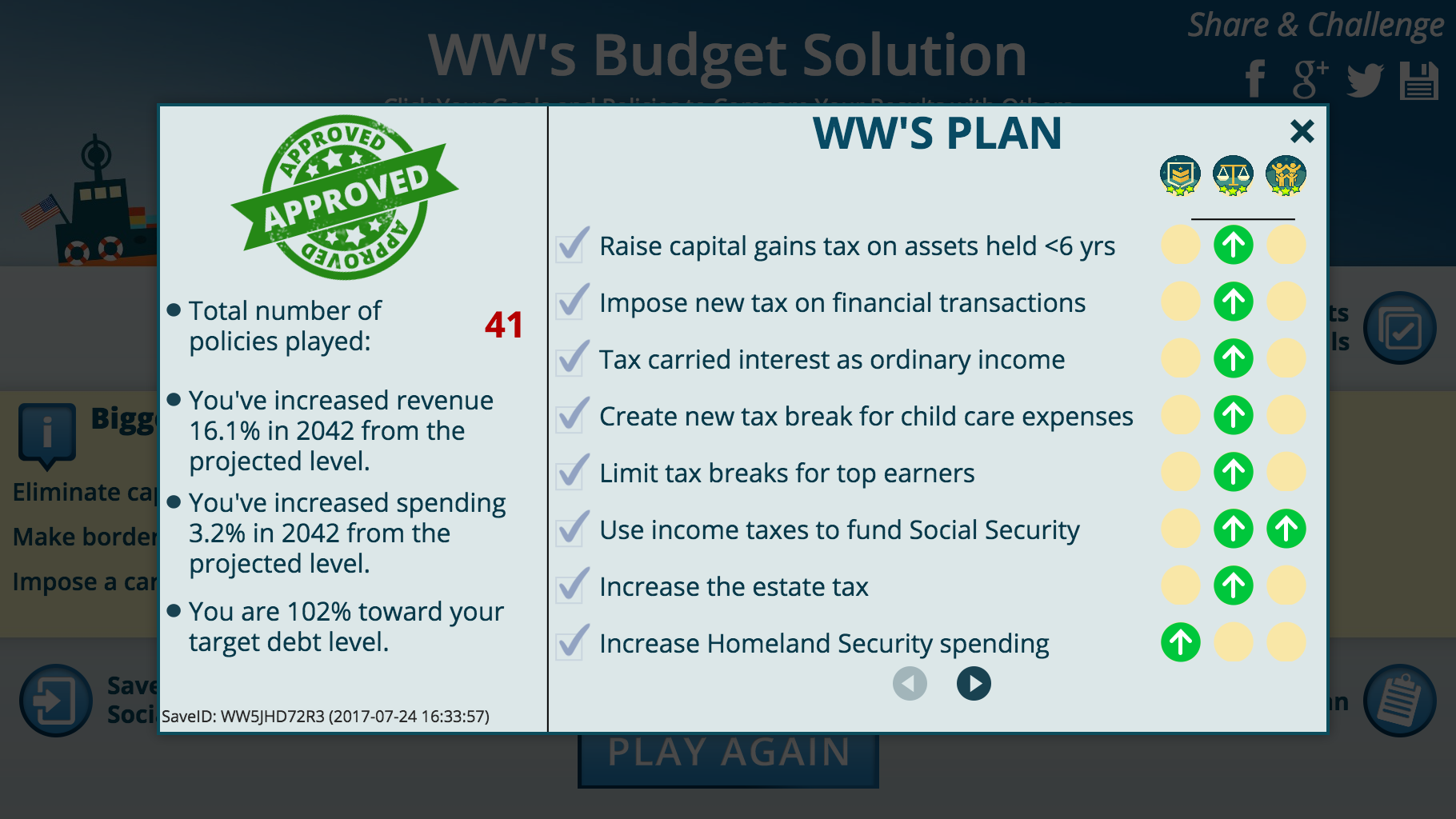 Some required a bit more manipulation in order to understand what would have done if he were President. This was based on an interpretation of information from his biography and how his values are perceived by historians as opposed to a strict concentration on policies he actually passed. For example, what would Wilson have done if he was confronted with options like making preschool mandatory for four-year olds? Because Wilson was known as “The Schoolmaster of Politics,” we suggested he would be in favor of early education. His support for policies like mother's pensions (translated to paid family leave) played a key role in achieving the goals we selected. But would he have increased spending on NASA, which would help with the development of breakthrough technologies? We will never know.

The problem we ran into with Wilson’s goals is that, though easy to meet in the game, balancing the budget was difficult. In trying to be as close to Wilson’s platform as possible, there was not quite enough revenue from the increase in taxes like income and corporate to support the expansion of the military, even though in 1918 his income tax alone covered a third of all war expenses.

We dove deeper into his biography to see if we could find a solution, and landed on Wilson’s stance on international trade and tariffs, detailed in the Underwood Tariff Act of 1913, the budget was managed. Thirty-nine policies later and the budget was on a sustainable course.

Playing through the game as Wilson introduced some interesting questions.  How would Wilson have handled today’s energy crisis? What would his position be on taxing things like sugary drinks and carbon emissions? What would he do with NASA’s budget?

In short, how would he have been as captain of the Fiscal Ship?