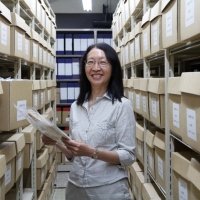 Dr. Ning Jennifer Chang surveys the collections available at the Institute of Modern History, Academia Sinica, Taiwan, including the archives of the Republic of China Foreign Ministry and the Economic Ministry.

In February 1955, Academia Sinica established a preparatory committee for the Institute of Modern History (IMH) and invited Professor Kuo Ting-yee (1904-1975), a renowned historian, to serve as its chair. The initial work of the committee included recruitment of research personnel, formulation of a research plan, purchase of books, and collection of historical documents from both official and private sources.

The IMH Archives was established in 1958 three years after the IMH was formally established. In 1988, a building was further built to house the documents the Institute had collected over several decades.

After more than half a century of meticulous work, the IMH Archives now contains important original historical records, and serves as a major repository for research on modern Chinese history. Its collections can be roughly divided into three groups: namely, the foreign ministry collection (1861-2009), the economic ministry collection (1903-1980), and personal papers. The total length of all the files combined is around 10,000 meters.

The Republic of China collection (catalogue reference number 11) requires some explanation. Covering the years 1928 to 2009, it is the result of the merger of two sets of foreign ministry collections: that of the IMH Archives and that of Academia Historica. Through a joint digitizing project between these two institutions, the latter kindly agreed to share with the IMH Archives the digital images of its collection. They constitute reference numbers 11-29 to 11-99 of this catalogue and occupy roughly one-third of the holdings in our Republic of China collection.

The Economic Ministry Collection constitute the largest single set of materials of the Archives, and include the records of the Commerce Ministry (1903-1906), the Ministry of Agriculture and Commerce (1913-1927), the Ministry of Industry (1930-1938), the Ministry of Economic Affairs (1938-1980), and documents from various economic offices created after the Nationalist Government retreated to Taiwan. These are important primary source materials on the economic development of Republican China and Taiwan.

Taking the Ministry of Industry as an example, established in 1930, this Ministry was the leading economic agency of the Nationalist Government before the Second Sino-Japanese War (1937-1945). The Ministry divided its responsibilities among the departments of Agriculture, Forestry, Fishery, Mining, Commerce, and Industry. It was the first economic ministry in Republican China to keep complete archival records. They include personnel records, organizational charters, budget records, and project reports. The Ministry of Industry’s materials are regarded as the most important of the economic collection housed at this Archives.

Over the past ten years, the focus of the IMH’s collection efforts has gradually shifted from official documents to private papers. Other than the personal documents of those who previously held important military and political positions and leading figures in finance and medicine, we also collect materials from private institutions, agencies and groups, and any materials that can contribute to the study of modern history.

The papers of Dr. Chu Chia-hua 朱家驊 (1893-1963) are among the most frequently consulted personal papers. After receiving his Ph.D. from Berlin University in 1922, Chu went back to China and began an illustrious political and educational career. He became a member of the Central Executive Committee of the Kuomintang in 1929; President of Central University, Nanking, in 1931; Minister of Education 1932-33; Minister of Communications 1933-35; Executive Secretary at Academia Sinica 1936-38; and Acting President of Academia Sinica 1940-1957. Chu’s papers not only deepen our understanding of the Republican era but also throw light on the early history of Academia Sinica.

The papers of Dr. Robert K.S. Lim 林可勝 (1897-1969) were recently opened to public access in the spring of 2020. Lim was an esteemed physiologist who contributed greatly to teaching and research on physiology in Taiwan and played a key role in the development of the military medical system during the Second Sino-Japanese War. Founded under his inspiration and design, the Institute of Biomedical Sciences, Academia Sinica and the National Defense Medical Center are monuments to Taiwan's advances in biomedical sciences and modern medical education.

Lim’s papers include letters, telegraphs, works, reference notes for pain relief research, and related documents from the time of the establishment of the Military Medical Administration and the National Defense Medical College. Mostly in English, they reveal a true giant of medicine in Republican China.

Digitalization is a trend in archival management. The IMH Archives has been a pioneer in this respect, as we began to digitize its documents as early as the year 2000. Not only did we scan historical materials and set up a digital directory, we also marked keywords, including names of people, their birth places, their personal connections, and detailed geographic information of the files. By doing so, we built several archival databases for researchers and enhanced the accessibility and discoverability of our collections.

The IMH Archives has managed to operate more-or-less as usual during the Covid-19 pandemic. Nearly half of our digital holdings are online and can be accessed through the internet after registration, while the on-site reading room, thanks to the excellent strategy of the CDC in Taiwan, only closed for 3 months in 2021. Researchers are welcome to visit us in person by appointment.

To Visit the IMH Archives

Dr. Ning Jennifer Chang is a Research Fellow at the Institute of Modern History, Academia Sinica, Taiwan, and concurrently serves as the director of the Institute’s Archives. She is the author of "Cultural Translation: Horse Racing, Greyhound Racing and Jai Alai in Modern Shanghai" (異國事物的轉譯：近代上海的跑馬、跑狗與回力球賽).