Nuclear Weapons and Their Pride of Place in North Korea

Visiting my colleague Van Jackson’s office in New Zealand last week, I spotted a classic North Korean souvenir on his shelf: commemorative stamps, packaged as a booklet and sold to the tourist who brought it back for him as a gift last year. These stamps are not of the iconic Juche Tower or the Arch of Triumph (which every North Korean will point out is taller than its counterpart in Paris). These feature North Korean leader Kim Jong Un’s prized intercontinental ballistic missile, the Hwasong-15, designed to strike the mainland United States and test-fired in November 2017. 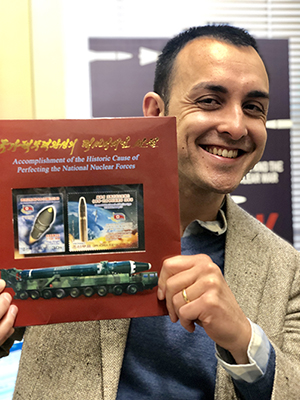 Van and I laughed at the irony of Pyongyang gift shops featuring stamps glorifying the very weapons that President Donald Trump is demanding that Kim give up. But the stamps highlight an inherent contradiction in the messaging from Pyongyang: While Kim may have agreed in Singapore to “work toward complete denuclearization of the Korean Peninsula,” he has given his people no indication that his promise includes completely relinquishing North Korea’s nuclear program.

In the minds of the North Koreans, there is no contradiction. They are told by their regime’s propaganda machinery that North Korea’s nuclear arsenal not only protects them from U.S. aggression but also puts them on equal footing with Washington. In their propaganda, the bombs and missiles are the reason Trump stepped over the Military Demarcation Line inside the DMZ to shake Kim’s hand in late June — on North Korean territory. (North Korea has just produced stamps commemorating that propaganda coup at the DMZ.) The people are told the bombs also will bring them out of economic hardship because they will compel the United States to declare peace with North Korea and lift the sanctions that the North Koreans are told Washington imposes as part of its “hostile policy” toward the Korean War foe.

Nowhere in North Korea does this picture include completely surrendering nuclear weapons.

Cultivating a sense of pride in North Korea’s weapons program is a policy priority under Kim Jong Un, who has used bombs and missiles to build up his standing at home as a military strategist and to muscle his way onto the world stage. In 2017, at the height of the standoff between Washington and Pyongyang, Trump derisively called Kim “Rocket Man.” Little did he know Kim probably relished the nickname since his reputation back home rides on his success in testing rockets and missiles.

Every child wanted to be photographed in front of the rockets at the kimilsungia and kimjongilia flower shows...

The propaganda glorifying North Korea’s weapons program was everywhere in Pyongyang in recent years. During my years reporting in North Korea, I saw rockets on posters, stamps and calendars. Every child wanted to be photographed in front of the rockets at the kimilsungia and kimjongilia flower shows (yes, there are flowers named after the two late leaders). Two years ago, during a shopping trip at Pyongyang’s biggest supermarket, I bought school notebooks featuring rockets on the cover. And there’s no illusion that these are rockets meant for space: the walls of kindergartens I have visited feature murals with tanks and missiles in flight — and children cheering them on. 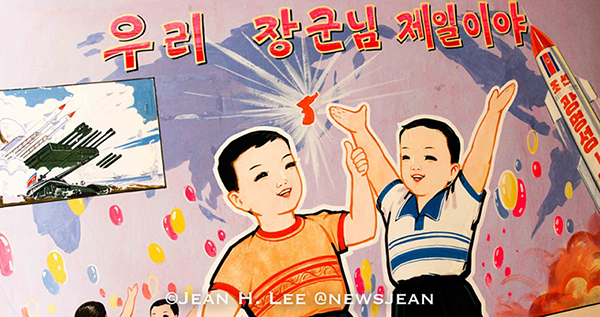 In 2017, I wrote about a popular TV drama in North Korea, “Our Neighbors,” which features a scene revolving around a highly provocative December 2012 rocket launch. That launch, seen as a test of missile technology, drew tightened sanctions from the UN Security Council, which bans North Korea from ballistic missile and nuclear weapons activity. In this scene, Pyongyang residents momentarily put aside their complaints and personal grievances (yes, North Koreans do bicker and complain) to celebrate the launch of a missile designed to strike the United States. It’s a telling indication of how the weapons are used as a way to build a sense of pride and unity among North Korea’s long-suffering population.

But the subtext is clear: without the nuclear weapons, the diplomacy and economic developments would not be possible.

Today, the stamps and posters have shifted in focus to Kim’s diplomacy and the economy. But the subtext is clear: without the nuclear weapons, the diplomacy and economic developments would not be possible. North Korea’s nuclear weapons are such a source of strength and pride for the people, and such a key strategic tool for Kim, that it’s hard to see him giving them up entirely.

That’s not to say we should shun negotiating with North Korea. Trump has embarked on an unconventional path to diplomacy with Kim, and we must take advantage of the opportunity to constrain, if not completely shut down, North Korea’s destabilizing nuclear program.

But we should be realistic about Kim’s intentions, and understand the role that nuclear weapons and ballistic missiles play in the North Koreans’ sense of purpose and pride. For North Koreans, making “peace” with the United States has never included entirely giving up nuclear weapons. It does include giving up some elements of the program in exchange for concessions. Trump already has let Kim use the tensions of 2017 to justify the acceleration of testing; the Trump Administration must not squander the chance to stop North Korea from further developing its arsenal.

Jean H. Lee is director of the Hyundai Motor-Korea Foundation Center for Korean History and Public Policy at the Wilson Center. As a journalist, she has made dozens of extended reporting trips to North Korea since 2008.  You can follow her on Twitter and Instagram @newsjean and follow the @Korea_Center on Twitter.