Q: On December 7, former Peruvian President Pedro Castillo tried to launch a self-coup, only to be impeached and jailed hours later. That upheaval deepened the political turmoil that has gripped Peru for years now, a product of public corruption and a chronically dysfunctional relationship between the congress and the presidency. The country has had six presidents in seven years, and protestors are demanding the resignation of Dina Boluarte, who succeeded Castillo. How did Peru get into this mess, and how can it get out of it?

A: There are multiple “messes” overlapping here, including long-term challenges and immediate crises. Peru has a legacy of authoritarianism and exclusion, with few periods of civilian rule where representative political institutions could develop and effectively express the voices and needs of all citizens. Rural and indigenous peoples have been historically under-served by Lima-based national institutions. In 2021, Peruvians elected the country’s first “campesino president,” but he faced an obstructionist opposition and proved unable to make good on any of his campaign promises, producing significant disillusion.

Peru’s last democratic transition, in 2000, came after a decade of liberal economic reforms under the autocratic administration of Alberto Fujimori. Those policies allowed the country to enjoy years of relative stability and economic growth. However, deregulation resulted in one of the highest levels of informality in the world; more than 70 percent of Peru’s adult population works in precarious conditions, with few rights, benefits or labor representation. The COVID-19 pandemic exacerbated these conditions: social services collapsed, millions fell back into poverty and the country suffered one of the highest mortality rates in the world. The war in Ukraine affected access to fertilizers and increased prices of basic goods, while the southern regions experienced severe droughts.

The Peruvian constitution allows a majority in Congress to impeach a president on the vague grounds of “moral incapacity,” meaning leaders without significant support in Congress face a constant threat of removal. Castillo avoided two prior efforts at impeachment, and analysts predicted he would survive a third last month. Yet for reasons that are still unclear, he ordered security forces to close the Congress and intervene in the judiciary. Fortunately, this effort failed. Castillo’s successor and former vice president, Dina Boluarte, was rejected by Castillo’s supporters, even before protests exploded in the south of the country early this month. Tragically, the demonstrations were met with excessive violence by security forces, leaving over 50 dead and thousands injured, including protesters and police. The heavy-handed government response increased public anger against Boluarte, generated nationwide sympathy for the protesters and complicated the president’s attempts to build alliances in Congress and across civil society. She recently won a vote of confidence for her cabinet and asked for forgiveness for the abuses by security services.Legally, Boluarte should finish out Castillo’s term, which would have ended in 2026. But that appears unacceptable to a majority of Peruvians. Polls show that over 70 percent of Peruvians disapprove of Boluarte, and nearly 90 percent hold negative views of Congress.

Q: Labor unions, indigenous organizations, university students and other groups are calling for the president´s immediate resignation. This week, protesters arrived in the capital to make their voices heard in a “toma de Lima” (occupation of Lima). Is there any hope for a peaceful transition? Can Boluarte address frustration among those who saw Castillo’s presidency as an opportunity to rebalance wealth and power in Peruvian society?

A: Boluarte has agreed to meet with protesters and governors demanding her resignation.  However, that outreach will be complicated by the absence of clear leadership among protestors and by the diversity of their demands, from early elections and a constituent assembly to Castillo’s release from prison, the expulsion of foreign mining companies and policies to address long-term economic and social inequalities. While most protesters are peaceful, mobs in southern Peru have attacked and damaged public infrastructure, including airports and police stations. For its part, the government has at times seemingly condemned all protesters as criminals and terrorists.

Q:  For years, it appeared that Peru’s economy was largely untouched by its political dramas. That is no longer the case. Recent protests have closed airports, disrupted the tourism sector and reduced mining production. More broadly, the political uncertainty has led to capital flight and depressed investment. Can Peru’s historically strong economic growth sustain without a durable solution to its political and social challenges?

A: Appearances are deceiving; economics and politics in Peru have never been entirely separate. Certainly, the Peruvian economy has benefitted from its independent Central Bank, fiscal stability, openness to trade and investment and strong demand for its major exports, especially minerals and agricultural products. At the same time, Peru has long failed to meet the basic needs of much of its population, including quality health care and education and physical and digital infrastructure. Frequent leadership changes have made long-term planning impossible.

The extreme degree of informality is another consequence of Peru’s political dysfunction. When the majority of workers have no legal rights or representation, for example, they miss out on many of the benefits of economic growth. Corruption imposes huge economic and social costs, and undermines public confidence in government. The most notorious recent example was the Odebrecht scandal, which implicated every Peruvian president since 2001. Castillo pledged to improve transparency, but evidence suggests his inner circle engaged in similar conduct. Finally, weak governance has allowed a large and growing sector of the economy to pursue illegal activities, including drug trafficking and unlicensed mining and logging. Criminal organizations use their financial might to corrupt public officials and officeholders.

Nowhere are these trends more evident than in the Southern Andes. Seven regions account for 53 percent of mining investment, produce 18 percent of national GDP and receive nearly half of all tax revenue generated by mineral exports. Yet despite these resources, three of these regions – Puno, Huancavelica and Ayacucho – have the highest poverty levels in the country. These disparities have generated social unrest, especially, but not only, in the south, where communities see their natural wealth extracted with little to show for it in local economic development. Their anger intensified when supporters of Castillo’s conservative rival, Keiko Fujimori, the daughter of Peru’s former dictator, sought to annul over 200,000 votes from rural communities to reverse Castillo’s narrow 2021 victory. So it is not surprising that protesters are not only demanding new elections, but also a new constitution that would strengthen indigenous rights and replace Peru’s liberal economic model. Polls suggest that a majority of Peruvians want greater state involvement in the economy and society.

Q: The leftist leaders in Argentina, Bolivia, Colombia and Mexico have not recognized Boluarte as Peru’s president. Following Castillo’s ouster, they issued a joint statement declaring the former president a victim of “undemocratic harassment.” Mexico’s president, Andrés Manuel López Obrador, even offered political asylum to Castillo and his family; his government’s criticisms led Peru to expel Mexico’s ambassador in Lima. What do these reactions to Peru’s crisis tell us about the priorities of Latin America’s leftist leaders? What are the implications for the defense of democracy in Latin America?

A: The political situation in Peru has generated broad concern in the international community. Many governments, in the Americas and beyond, recognize the Boluarte administration, while expressing disapproval of the excessive use of force by the security services against protestors. Given ideological affinities, it was not surprising that some leaders – including the presidents of Argentina, Colombia and Mexico – rejected Castillo’s impeachment for corruption and forgave his attempted coup d’état. But their hostility toward Boluarte is significant, as it could have negative implications for the Pacific Alliance, a once-promising regional integration initiative. 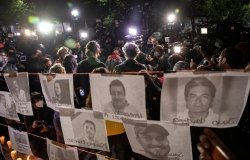