This past year has been momentous in many ways, with the war in Ukraine, economic turbulence, COVID-19 and other events stealing the headlines. In this year-end, three-part series, Wilson Center President and CEO Mark Green, shares his thoughts on several “stubborn things” that despite being under the radar are shaping our world; conditions and developments that, as law professors sometimes say, “res ipsa loquitur,” or speak for themselves.

In 2008, Russia launched a war against Georgia, in response to their strengthening ties to the West. While the fighting only lasted five days, Russian forces have occupied roughly one-fifth of Georgia ever since. The conflict left 850 dead and 35,000 Georgians homeless. In the 14 years since, the Kremlin has flooded Georgia’s occupied territory with propaganda and disinformation. Russian military bases continue to grow and take more territory every day.

Perhaps the occupation’s biggest impact, however, has been on human rights. Recent legislation in Georgia has raised concerns about possible press censorship. Local media and watchdogs warn of government interference with journalistic outlets. International assistance and NGOs are denied access to the occupied territories of Abkhazia and South Ossetia. In all, there is little respect for civil liberties or the rule of law.

Women in Afghanistan are Now Banned from Parks.

In November, Taliban authorities banned women from all parks, pools, and gyms. During its months of negotiations with the Trump and Biden administrations, the Taliban tried to convince the world that it was a “different Taliban” than had previously ruled Afghanistan with an almost medieval flair. But any semblance of change or modernization has been largely dashed by the new government’s actions since the hasty US withdrawal from Afghanistan.

Women cannot leave their houses without a male relative and must cover their faces. Several women were among the dozen Afghans recently publicly flogged at a football stadium for what were termed “moral crimes” by a Taliban official. The Taliban has banned girls’ secondary education, and Save the Children estimates that 80 percent of secondary, school-age girls in Afghanistan have been denied schooling. At higher education levels, the Taliban have barred young women from studying certain subjects at university, and restricted them to gender-segregated classes. Many fear that further restrictions on education will be next. If all of the foregoing weren’t enough, a recent World Bank survey concluded that Afghan families face “grim” living conditions with “widespread deprivation.”

In 2022, most media coverage of US-Taiwan relations focused on high profile trips by US officials to Taiwan, including House Speaker Nancy Pelosi, and high profile responses by the government in Beijing. These responses included numerous Chinese military flights into Taiwanese airspace and Chinese naval vessels coming ever closer to Taiwanese shores. But that obscures a fundamental reality for Taiwan and much of the region: Taiwan has a larger trading relationship with China than it does with the US. So does South Korea. Even as tensions between the US and China rise, and countries in the region become increasingly wary of Beijing’s ambitions, many countries now rely on Chinese markets more than those from America to develop their economy. American officials and media tend to frame the US presence in the Indo-Pacific in hard power terms…but for many in that region, it is Chinese economic strength (and American economic under-engagement) that is more pressing. 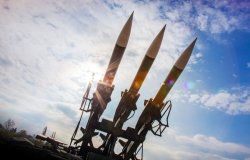