Moscow’s funeral industry’s high-placed curators within Russia’s political police are raking in billions of rubles in undocumented cash every year. An important MP in the city of Moscow is investing millions of euros in properties in Austria. Russia spent billions of rubles on city improvements, while only 15 percent of all projects materialized. The rector of Moscow State University has been taking good academic care of his protégée, who happens to be the Russian president’s daughter. The head of Russia’s biggest state-owned oil company is building an extravagant new home near Moscow.

This long list of scoops was the harvest of just one recent week, the first week of July. Five unrelated projects, each a long time in the works, were published between a Monday and a Thursday of one week. Not every week is like this; this was a particularly dense one, but it is indicative of a trend.

To be sure, the Kremlin has announced no policy change. Most large media outlets are still under state control in one form or another. Russian television’s prime-time anchors still erupt with scorn and anger at their next target of choice. Journalists still have to deal with restrictive legislation, and anyone can face prosecution for online speech.

And yet there is an unmistakable sense of an increasingly vibrant journalistic scene in Russia. The trend is by no means uniform, though: the contributing factors are too diverse. The story about the Moscow funeral industry was the work of Ivan Golunov, the Meduza reporter who last month was falsely accused of dealing in drugs and released after a major public outcry. Over thirty other media outlets, domestic and international, joinedMeduza in contributing to or distributing of the report.

The piece about a Moscow MP was the work of an anticorruption organization led by Alexei Navalny, who is now waging a campaign to get a group of his colleagues registered as candidates for the Moscow City Council. The council election comes up in early September and the municipal government is working to prevent independent candidates from running.

The third item on our list, the story about city improvement schemes, was published by Vedomosti, a business daily (this writer was a long-time editor of Vedomosti’s editorial pages).

The outlet behind the profile of Viktor Sadovnichy, the Moscow State University’s rector, is called Proekt. This reporting startup, founded last year by a well-known Moscow journalist and editor, Roman Badanin, focuses on journalistic investigations.

The story of an exuberant real estate project being developed on a plot of land owned by Igor Sechin, the CEO of Rosneft, was published by a journalistic startup called Baza. Until last year the young founders of this project used to work for fiercely pro-government tabloid-style media, but apparently they ran afoul of the Kremlin. Baza is now marketing an app based on outside media reports and user-generated content.

The Bell, another project that should be mentioned in this quick and incomplete survey, is a site that mostly distributes content via newsletters. This is an important new resource that launched two years ago and has already established itself firmly as a leading independent source of daily news on economics and business. The Russian newsrooms of BBC, Bloomberg, and Reuters were recently staffed with excellent reporters who had to leave their native Russian media for various reasons. The investigations platform The Insider, founded in 2013 by the activist reporter Roman Dobrokhotov, has cooperated with Bellingcat in investigating the attempted murder of the double agent Sergey Skripal.

The types of media, their economic models, editorial policies, and standards of reporting are diverse, as are their missions. While Vedomosti is your typical mainstream newspaper, Navalny’s organization is his vehicle for oppositional politics. While Meduza, a Russian-language news site based in Latvia, gained much notoriety during the Golunov scandal, little is known about Baza, the group behind the Sechin report.

The glasnost of the title has to be taken with a grain of salt. Normally, you know your glasnost when you see it: it unleashes the floodgates. The actual historical glasnost was a policy spearheaded in the mid-1980s by Mikhail Gorbachev, then newly appointed General Secretary of the Communist Party of the Soviet Union. I remember my parents gasping in disbelief at a new issue of a magazine. It could be a gruesome story of Stalinist collectivization, a piece by a religious philosopher who had been banned for the entire Soviet period, or a beautiful poem you had never heard of. Each day would bring new discoveries.

In today’s Russia, one week can bring you five large pieces full of previously unknown facts about public officials and their illegal moneymaking schemes. But it hardly feels like a breath of fresh air. In terms of new information, it is unclear what is it that could be “unleashed” in today’s Russia. We feel like we know too much, not too little.

The Kremlin has been concerned with the discourse that is circulating in public since Vladimir Putin’s first day in office. But it does not seem to be worrying too much these days. Since the upsurge in edgy publications is quite real, my only explanation for the Kremlin’s indifference is its belief that media revelations that are not followed by criminal charges and arrests can only go so far. It is just more noise in an already noisy environment.

I would not be that complacent if I were the Kremlin’s media manager in chief. Slowly but surely, Russia’s state-run television channels are losing their audiences. The internet and social media are already ahead of television in the numbers of daily users they attract, a recent study found. The Kremlin is facing the same problem as most other legacy media managers—big players lose out to smaller ones as audiences get distracted and torn between multiple sources of information.

Today’s growth in the supply of first-rate reporting is not a policy, of course. It is an organic phenomenon that has many sources. Powerful and wealthy businessmen and officials (often the same people) are prepared to talk to reporters because they are fighting for the shrinking pie and targeting each other. The number of leaks is growing for the same reason.

Journalists, in turn, are pressured to be more creative as traditional media and economic models fail them. New projects spring up, but it is unclear how sustainable they are in the long run. In today’s Russia, we are learning a lot, and it does feel like a big and important change. But it is a sense of direction that is often missing. Connecting the dots seems harder today than in any period in Russia’s entire post-Soviet history.

A good piece of analysis might therefore be helpful from time to time. Worthy opinion and analysis platforms exist, but they are not as numerous as purely reporting ones. Interpretative and knowledge sites include Republic.ru, which offers exclusive think pieces to paying customers; the informative and thoughtful website of the Moscow Carnegie Center; the deep and insightful English-language Point and Counterpoint; and Riddle, a bilingual platform for Russia’s young and bright analytical talent.

Yet the larger question remains: what does it take to get from learning more about the same bad state of affairs to being able to navigate one’s way to a better one? 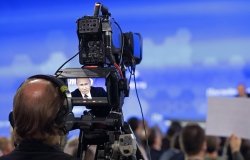 Audio
U.S. Elections
Electoral Politics and the Role of the Media 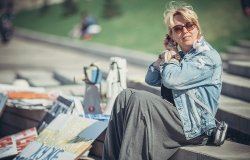