Explore More
Close
Blog post
Cold War
China and East Germany at the Height of the Sino-Soviet Split
By Steven Grundy on January 11, 2021
Share on FacebookShare on TwitterShare via Email
SharePrint
Blog post

The Central Intelligence Agency has just released excerpts from over 100 National Intelligence Dailys – or NIDs – relating to the collapse of communism in Eastern Europe.

The Central Intelligence Agency has just released excerpts from over 100 National Intelligence Dailys – or NIDs – relating to the collapse of communism in Eastern Europe.

The documents are accessible on the Wilson Center’s Digital Archive, as well as on the CIA’s Electronic Reading Room.

The National Intelligence Daily was the CIA’s principal form of intelligence analysis at the time. The top-secret reports featured pithy summaries of, and commentary on, the fast moving events in Eastern Europe in 1989-1990. The NIDs enabled policymakers to get a quick sense of what was happening in states such as Albania, Bulgaria, Czechoslovakia, East Germany, Estonia, Hungary, Latvia, Lithuania, Poland, Romania, and Yugoslavia.

The CIA did not declassify all portions of the NIDs for security reasons. Other redacted portions of the documents feature the notation “NR record” or “non-responsive,” meaning that the information is unrelated to the events in Eastern Europe.

Not all of the NIDs released are “new.” Documents collected by Mark Kramer and reviewed by the History and Public Policy Program show that the CIA previously released more than a dozen of the NIDs, some as early as June 1999. Nevertheless, in some cases the 2019 releases contain fewer redactions than the earlier releases. The History and Public Policy Program will add the earlier releases to DigitalArchive.org in the near future, as well as other NIDs not included in the 2019 release. 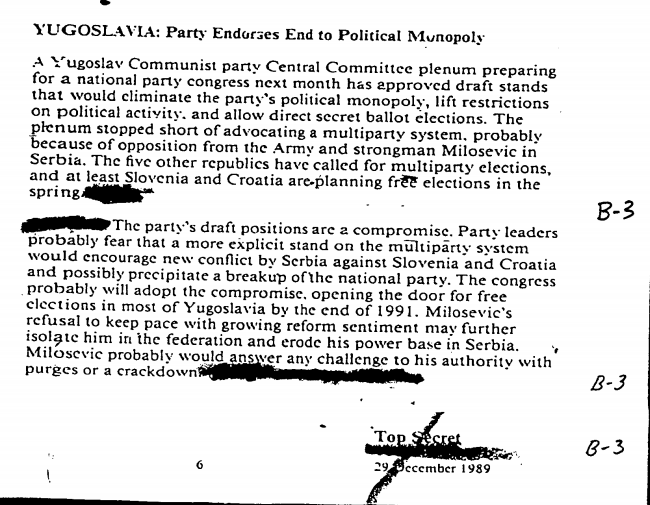 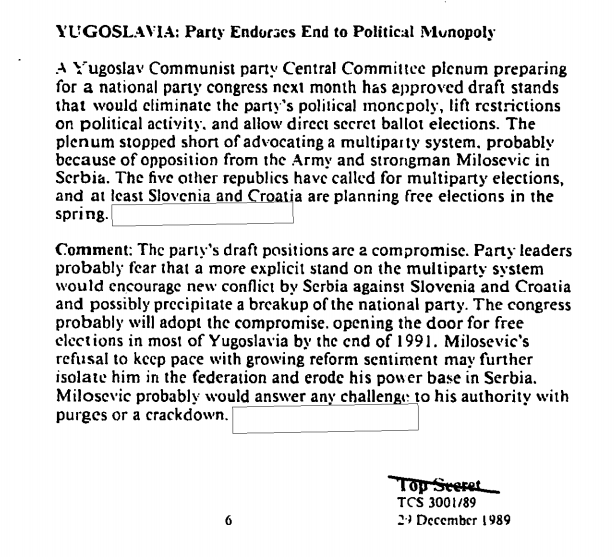 The National Intelligence Dailys were released by the CIA to coincide with a December 10, 2019, event co-organized by the Agency’s Office of Public Affairs and the Wilson Center’s History and Public Policy Program.

The event, “The Collapse of Communism in Eastern Europe: A 30-Year Legacy,” featured a keynote address by the Polish Minister Coordinator for Special Services, Mariusz Kaminski. A recorded webcast is available on demand here.

During a panel discussion that followed the keynote, John McLaughlin and John Gannon – two former officers of the Central Intelligence Agency who monitored the fall of communism in 1989 and 1990 – put the NIDs in context. Both McLaughlin and Gannon provided insights into their day-to-day work in 1989-1990, including their travels to Eastern Europe and their interactions with the administrations of President Ronald Reagan and President George H.W. Bush.

Historian Mark Kramer highlighted the significance of the declassified NIDs, but also emphasized that they represent but a small portion of CIA analysis produced at the time. Kramer obtained more declassified CIA material from the George H.W. Bush Presidential Library in College Station, Texas. A considerable number of sources are also accessible on the CIA’s website.

Constanze Stelzenmuller, presently the Kissinger Chair at John W. Kluge Center, gave a personal testimony about the significance of 1989-1990 for Germany. She also described her fears that the transatlantic community is losing touch with the lessons and values of 1989. Stelzenmuller’s remarks drew on her November 2019 essay “German Lessons,” written for the Brookings Institution.

Charles Kraus is the Deputy Director of the History and Public Policy Program at the Wilson Center.