In a surprise move on February 18th, Chinese authorities announced a ban on North Korean coal imports. This decision will hit Pyongyang hard. The DPRK traded 22.5 million tons of coal with China last year, roughly one third of its total exports and one of its few major sources of foreign currency.

Pyongyang’s overreliance on its coal trade with China is not a new phenomenon--even in the wake of a slew of UN sanctions in recent years. The DPRK has always been vulnerable to fluctuations in this trade. The country was dealt a bad geological hand and it has, historically, kept very few major trading partners. China has finally chosen to exploit this vulnerability.

A look at the history of the Chinese-Korean coal trade shows that the ban will sting North Korea, but there could still be worse things to come.

Coal comes in several grades, their properties dependent on the geological pressure under which they were formed. Softer coals like lignite and bituminous coal are commonly burned as a fuel for electricity production and industrial processes. Anthracite, a harder coal, burns slow and hot, releasing little smoke. This makes it great fuel for a home furnace or a pizza oven. These same qualities limit anthracite’s industrial uses. 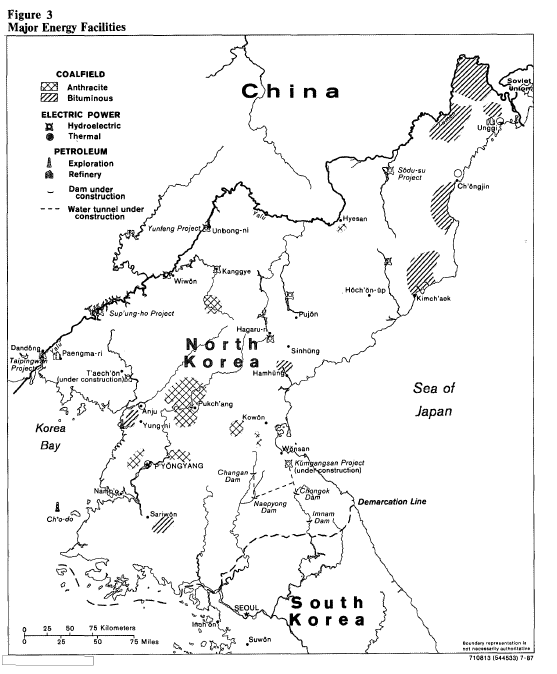 North Korea has a lot of anthracite--about 8-12 billion tons worth--but scarce reserves of other coals and no oil. North Korea’s challenge has been to make all that anthracite useful for industrialization.

One of the country’s most infamous innovations, the synthetic fabric known as vinylon, is produced from anthracite and limestone. During periods of persistent cotton shortages in the 1960s and 1970s, anthracite helped to clothe the North Korean people. North Korea also experimented with “coal gasification” to produce a gas mixture that can be burned in power plants or internal combustion engines, making it possible to power a fleet of trucks without the need for expensive foreign oil.

Aside from juche fabric and coal-powered trucks, North Korea has used (and continues to use) anthracite to generate heat for industrial purposes. Visiting engineers from Hungary reported in 1968 that the DPRK was using anthracite at its thermal power plants, even though this was a much “more expensive [way] to generate electric power.” Declassified CIA reports from as late as 1983 suggest the DPRK was “develop[ing] technology” to more efficiently use anthracite in thermal power generation.

Yet none of these schemes resolved a critical structural gap in the North Korean economy: the DPRK has very little, if any, metallurgical coal or petroleum--key resources for industrialization. For a country committed to “self reliance,” this is a real problem.

Metallurgical grade bituminous coals, aka “coking coals”, are the necessary precursor to coke--a fuel and reduction agent in the production of steel. Some modern steelmaking processes use pulverized non-metallurgical coals to partially replace coke, but at the end of the day if you don’t have coke, you aren’t making steel. During the Cold War and today, this resource deficit forced North Korea to import coking coal from China, the Soviet Union/Russia, and elsewhere at great expense.

Because upwards of 75 percent of North Korea’s coal mines were destroyed by UN bombings from 1950 through 1953, China provided considerable amounts of coal to the DPRK gratis during the country’s reconstruction period and during its First Five-Year Plan (1957-1961).

But North Korea had to start paying for coking coal eventually. It did so with anthracite. After rehabilitating its mines over the course of the 1950s (with the backing of the socialist bloc, of course), the DPRK produced 10 million tons of anthracite coal in 1961. According to customs gazetteers from Northeast China, some of this coal made its way to the DPRK’s allies as early as 1962. 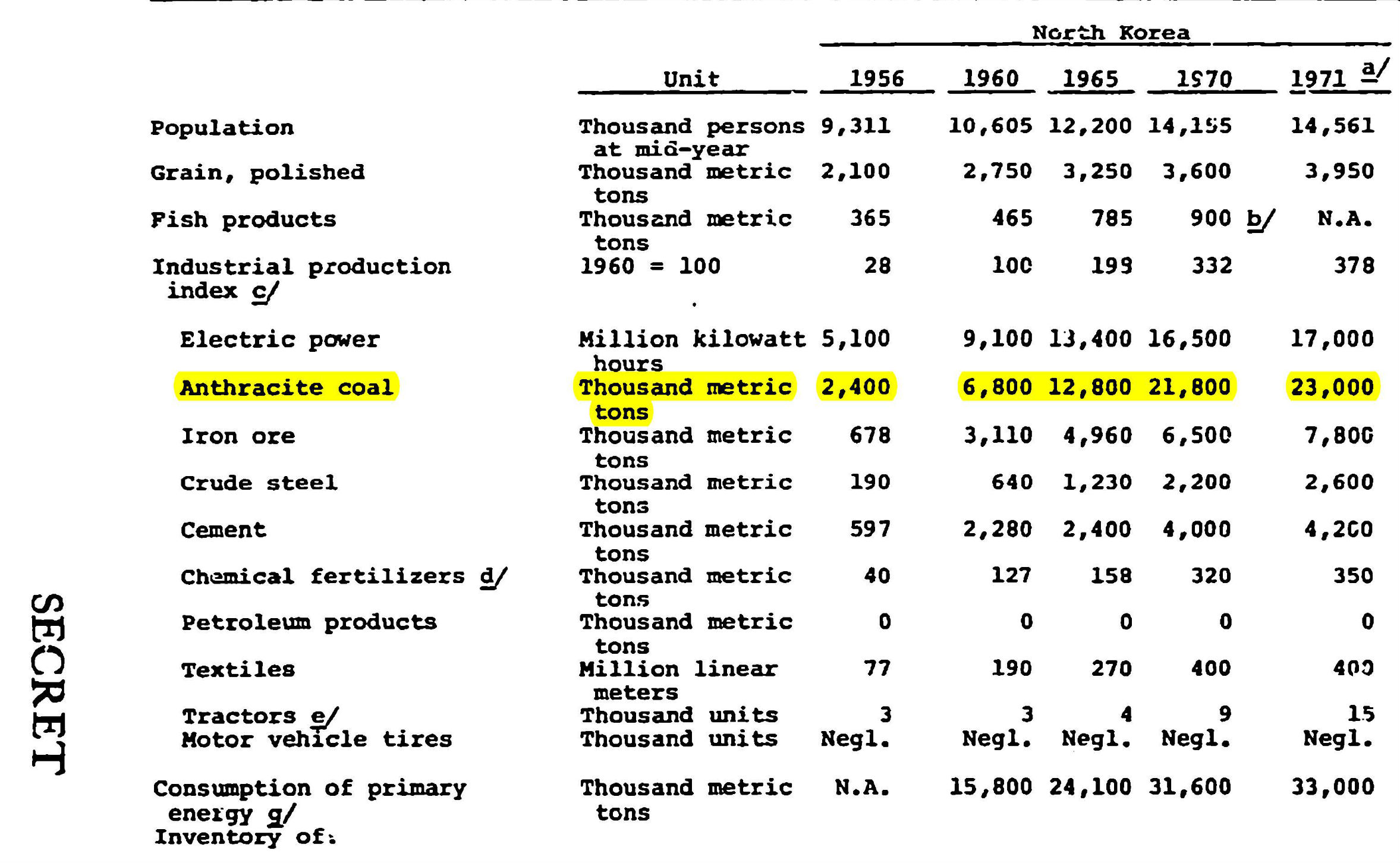 North Korea took steps to formalize and scale up the anthracite-for-coking coal trade soon after. China and the DPRK signed a series of trade protocols between 1963-1967, as part of which North Korea exported anthracite coal to China for coking coal. This exchange was re-agreed upon each year during annual negotiations prior to the Cultural Revolution. According to the CIA, the trade was revived shortly after the Cultural Revolution and continued into the late 1980s.

North Korea was not shy about admitting how critical this coal trade was to its economy. The DPRK’s Vice Premier frankly told Chinese leader Zhou Enlai in 1962 that his country was “completely dependent on China for coking coal.” Without the China trade, there was no way the north could industrialize.

North Korea’s Second Five-Year Plan (which, after numerous hiccups, became a Seven-Year Plan, running until 1970), emphasized the further development of the country’s heavy and defense industries. The plan demanded more steel, requiring North Korea to import coking coal at a rate outpacing its supply of anthracite to China.

Put simply, North Korea had to either expend more of its limited cash, take on debt, or export more goods to get all of the coking coal it needed from the socialist bloc. North Korea’s founding leader Kim Il Sung complained to visitors from China about his country’s foreign debts in December 1965, a hint that he wanted Beijing and Moscow to buy more North Korean products so that his country could afford coking coal. Other North Korean emissaries emphasized around the same time that North Korea desperately wanted to achieve a “balanced trade” with China and the other fraternal countries.

Into the 1970s, the North by-and-large remained dependent on anthracite as its export-in-chief. It sought to free up more of it for export by finding creative ways to reduce domestic consumption. In 1972, for instance, Kim Il Sung enjoined factories, homes, and schools to use whatever coal was “close at hand.” No matter the grade, Kim wanted his people to avoid consumption of “precious anthracite.”

Such measures made the North’s economy extremely vulnerable to fluctuations in the coal trade. In 1967, due to the chaos of the Cultural Revolution, China reportedly stopped sending coking coal to North Korea, throwing North Korea into crisis. The DPRK quickly attempted to construct blast furnaces capable of burning anthracite instead of coke, but, according to declassified intelligence reports, they were “not very productive.” It's probably not a coincidence that the lowest ebb in the history of Chinese-North Korean relations was contemporaneous with these disruptions in the coal trade.

Wary of such dependence on China for metallurgical coals, the DPRK has a long history of trying to develop technology to produce coke from its own anthracite. Kim Il Sung said in 1968, “It is not a law that only coking coal be used in the production of iron.” If only it were so easy. After a decade of failed indigenous innovation, North Korea began in the late 1970s to pester its socialist allies in Europe for technology that would would allow them to use anthracite in steelmaking. Pyongyang’s partners in Yugoslavia disappointingly informed them that “there is no such technology.”

China’s leadership understands the leverage it holds over North Korea’s economy, and today it is using the coal trade to punish the DPRK. By halting the purchase of anthracite coal from North Korea, they will sever one of the regime’s few income streams, making it even more difficult for the DPRK to purchase coking coal, petroleum, and other essential commodities from international markets. In the past, North Korea has lashed out when fluctuations in the Chinese coal trade impact its economy--and it did so again last week.

Going forward, observers will want to watch for how North Korea tries to weather the storm. Will it find new buyers for its anthracite? Will it use informal channels to smuggle anthracite to China? Or will the coal ban bring Pyongyang to heel?

A more critical question is what else China is willing to do. The ban on anthracite must sting for North Korea, but a clamp down on the export of petroleum and coking coal will hurt even more.