The Fiscal Ship: Can You Put The Budget On A Sustainable Course?

The Fiscal Ship: Can You Put The Budget On A Sustainable Course?

It has been over a year since the Serious Games Initiative at the Woodrow Wilson International Center for Scholars and Hutchins Center on Fiscal & Monetary Policy at Brookings Institute launched the game, The Fiscal Ship. The mission was to provide an accessible space for both the public and policy makers to learn and appreciate the complex process of putting the budget on a sustainable course. To pull players into the game, we posed the following scenario: If you were the captain of the federal budget, how would you steer the nation to a more financially secure horizon? 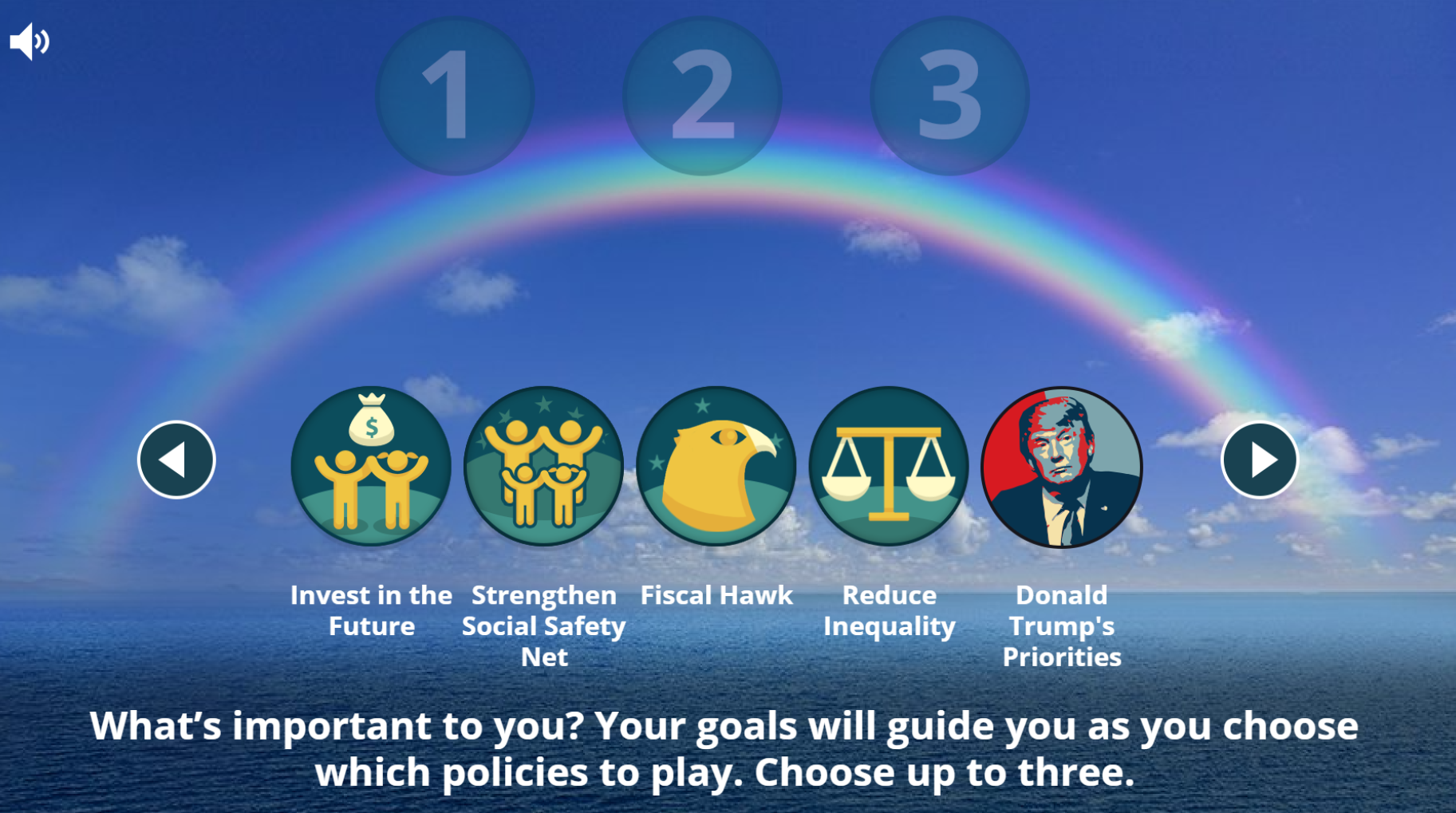 Players can pick policy goals, informed by national discourse on priorities such as investing in the future or reducing inequality. In order to help players better understand the priorities of the new administration, game designers recently challenged players to consider setting policies that align with President Donald Trump’s priorities.

While it is clear we have not single-handedly pulled the nation out of debt, The Fiscal Ship game has reached wide-ranging audiences from Hill staff to college classrooms that want to learn more about the federal budget process. The benefit of games like The Fiscal Ship is they make complex issues accessible without forcing a huge time commitment from players. With approximately 200,000 plays, the average player spends about 15 minutes playing The Fiscal Ship. Serious games like Fiscal Ship are especially valuable for opening the playing field to a broad audience of young voters-- over half of the people who have played our game are under age 35.

The Fiscal Ship allows players to first set an overarching political agenda (e.g. cut taxes, fight climate change), and then experiment with what policies fit in with that goal. Further, using data from the Congressional Budget Office, whenever a player selects a policy they can see the relative impact of that policy on the growth in the national debt.

In order to win, the player has to find policies that not only meet their goals but also bring down the growth in the national debt. Selecting a policy may have a positive impact on your goal, or a negative impact – just as it can either increase or decrease federal revenue. If the goal is to shrink government, policies need to fit that goal. But if the player has the goal of cutting taxes and strengthening national defense, then policies that may work for one goal may conflict with another. The game was designed to highlight that the federal budget is not independent of national values, but that these are instead critical for informing how we can work towards a bright fiscal future. 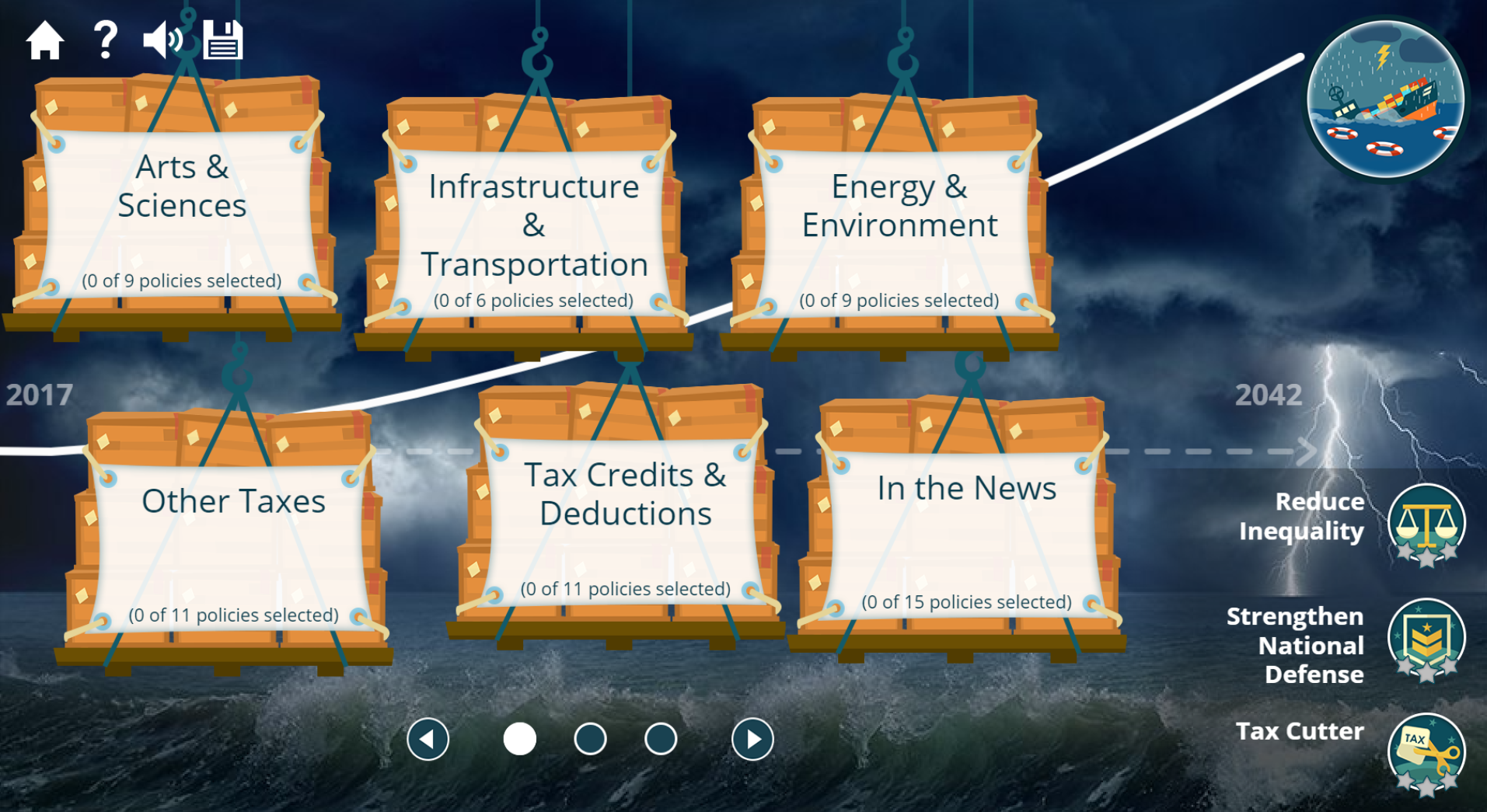 Pick from various topic areas, including a new "In the News" category. This new category allows you to see several policy initiatives that are making headlines.

When the game set sail in September of 2016, the nation was focused on the outcome of the Presidential election. The Fiscal Ship provided a space for players to compare campaign platforms, challenging them to try to both meet the agenda of a particular candidate while also illustrating the relative impact those goals would have on the federal deficit. Other platforms provided a space to see specific campaign proposals and their projected impact on the national debt, but The Fiscal Ship was (and is) unique in that players could set their own goals, too. The purpose behind this design was to illustrate how complicated it is for policy makers to meet the goals and campaign promises they have made while also achieving a decrease the trajectory of the national debt and put us on a sustainable course. 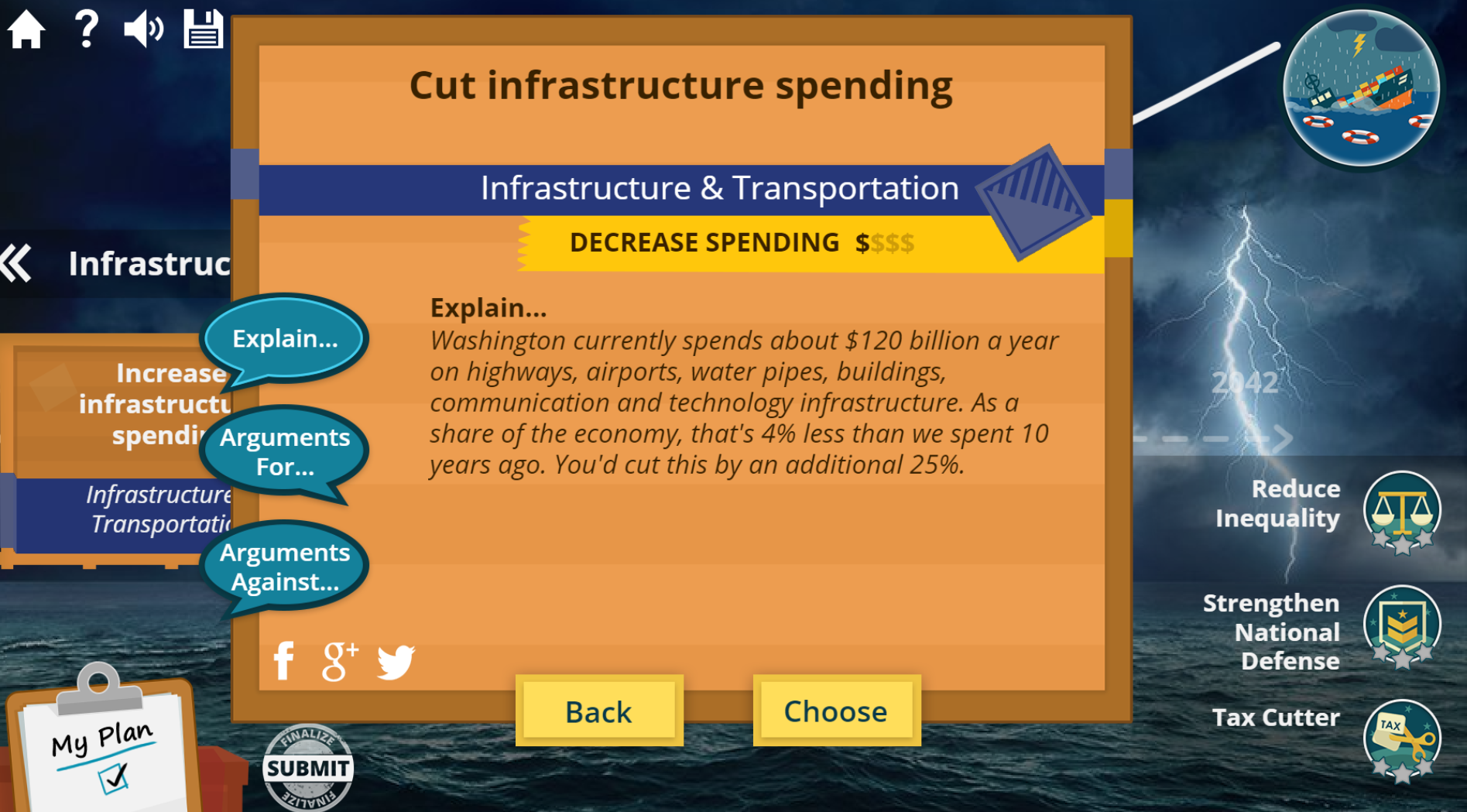 Pick your policies. It can be tricky, so each policy comes with a brief explanation of the policy, arguments for and against, as well as the relative influence on our national debt.

Now, a year later, the discourse around the federal budget still remains but has shifted to discussions around a concrete plan. In the game, you can now select policies and goals that reflect the President's proposed federal budget as well as other policies being proposed in the national discourse. While not exhaustive, the content is up-to-date, maintained by the Brookings Institute and vetted through a nonpartisan board. By playing the game, we hope that any member of the public can get a more hands-on experience with the federal budget and learn about the tough trade-offs that policy makers have to make every year.

So try your own hand at  playing The Fiscal Ship, and share your winning strategy with your friends. See what solutions you might come up with to guide us out of national debt.