U.S.-Russian Relations: How the World Could Have Been Different

Since the collapse of the Soviet Union, Russia has been traversing its own, often difficult path toward independent development. The trajectory of the country’s development was mostly determined by internal factors, particularly concerning the balance of power among various sections of the Russian elite.

At the same time, external players have had a stake in Russian politics and continue to do so today. Western partners often make political decisions on the basis of their own domestic considerations, alongside the rich tradition of using Russia in political discourse. The changes sparked by these external challenges then return, like a boomerang, to influence the foreign policy of Russia itself.

This article was written with a Western audience in mind, but I must add an important clarification for my Russian readers: I do not aim to justify the authoritarian tendency or the confrontational foreign policy taken by Moscow in recent decades. However, a sober conversation about what went wrong requires the input not only of Russians but also of their partners in the West, not least of all the United States.

The 1990s were not the first time in the past century in which American public opinion went through a familiar cycle with regards to Russia’s transformation—one beginning with unjustifiably high hopes and culminating in unreasonably deep disappointment. Viktoria Zhuravleva’s work tells how Americans hoped for the emergence of a “United States of Russia” during the upheavals of 1905, and then 1917. In both cases, it took just a few months before they started decrying Russia’s return to its state of “habitual despotism.”

This dynamic repeated itself in American political discourse during the waning years of perestroika and the dawn of Russia’s post-Soviet independence. The country’s democratic development was never destined to follow American lines. However, the eventual return of Russia’s elites to authoritarianism was interpreted in the United States first as the collapse of the entire mission of democratization and more recently as the return of a familiar Cold War adversary.

Nevertheless, I would venture to say that the current authoritarian regime in charge of Russia is not simply an analogue of the Soviet Union, however aggressively its leaders invoke Soviet revanchism. Frustrated Americans turn a blind eye to those freedoms in modern Russia—freedoms that are shrinking but still exist—that Soviet citizens simply did not have. Attempts to equate modern Russia to the Soviet Union are politically convenient for Moscow, allowing the leadership to close avenues for cooperation and facilitating the task of authoritarian development.

For Russia, the early 1990s were one of those critical junctures when many paths were open. The politically active section of society defeated a decrepit totalitarian regime, hoping to restore Russia’s full participation in the community of developed states in the global north. In those days, the most pressing question in Russian society appeared to concern identity: Who are we? In searching for an answer, many members of the reformist elite waited for the West to extend a hand in friendship, to offer assistance as equals. Accordingly, many among the Russian elite and society at large answered that question by attempting to reclassify their country as a member of the “first world.” It was the world Andrei Sakharov dreamed that Russia could join, as yesterday’s foe and tomorrow’s friend. That move, they hoped, could lead to Russia’s deeper integration into the West’s political, economic, and security structures, such as the EU, NATO, and, of course, the Schengen Zone.

Such a move, had it been successful, would not have prevented a nationalist backlash in subsequent years but might at least have limited it: elites integrated into Western systems would have valued the advantages of their position. And if, regardless of those achievements, Russia’s leaders had still opted for isolationism, then the world would be discussing “Russia’s Brexit” and its departure from the EU. It would not be discussing the annexation of Crimea and the evisceration of constitutional freedoms in Russia.

During the early 1990s, the idea of Russia as a new part of a generalized “West” was extremely popular. The actions of then foreign minister Andrei Kozyrev, which are today regarded in Russia as a prime example of betrayal and the abandonment of national interests, were seen simply as indicative of a desire for speedy international integration. All that was needed was for the West to take a step forward in response.

However, Kozyrev’s partners in the West did not consider Russia to be part of a united community of nations. As a matter of priority, they sought control over the newly independent countries on Russia’s western borders. The eastward expansion of European structures and NATO ground to a halt at Russia’s edge, functionally leading to Russia’s de facto “expulsion from Europe,” with the exception of the Council of Europe and OSCE. Responsibility for this state of affairs does not lie solely with the Russian elite.

Instead of the ending of the Cold War representing a victory for all concerned, politicians started to talk of the “West’s victory in the Cold War.” Some authors even wrote of expectations for a “Marshall Plan for Russia,” which never came to pass. In fairness, it can be said that such a plan would have been impossible in the early 1990s because of the domestic and economic restrictions on the United States and its European partners. But if Russia was to be treated as a defeated power, did this approach not depart from the widespread understanding of the importance of integrating Germany and then the rest of Europe in the 1950s?

The window of opportunity for Russia’s transformation was not open for long. By 1995, as a recent study demonstrates, Russia’s elites had already come to a new anti-American consensus. But from 1992 to 1994, much was still possible—indeed, that window became narrower in 2007, and narrower still, if not locked shut, by 2014.

In this sense, the West made its main mistake at the very start of the 1990s, when its elites did not believe in the possibility of integrating Russia and missed their chance to be proven wrong. They chose to fixate on regional successes instead. However, there are two more crucial junctures when decisions made by the West changed relations with Russia for the worse.

The first major blow was the refusal to negotiate clearly and openly. The most obvious example here is the Jackson-Vanik Amendment of 1974, which added restrictions on American trade with nonmarket economies that committed human rights abuses. The amendment, according to its own logic, should have been canceled at the end of perestroika, once the Soviet Union provided its citizens the freedom to leave the country. However, the U.S. Congress arranged for the amendment’s cancellation only with new conditions, so that in the end, the amendment was canceled alongside the introduction of new sanctions. Regardless of the appropriateness of these sanctions, the manner of their introduction did not inspire any great trust in the United States as a reliable partner.

All the aforementioned decisions undertaken by the United States and its European partners can be fully explained by domestic political factors and constraints. Nonetheless, these explanations do not absolve Western political elites of responsibility, just as the objective reasons for the evolution of Russian politics do not absolve the Russian leadership of responsibility for its acts.

Any attempt to imagine a better future for the world as a whole will require the honest recognition of errors from all parties. Without this, trust cannot be established. This is not about “equality” of guilt or about demanding a “balance” of responsibility but about the ability to reach compromises. In Russia’s case, there are reasons to expect that the next leadership will be ready to condemn at least some of the actions of its predecessors. But the question remains whether such a political force exists in the West. Obviously, NATO cannot admit its mistakes; no such body exists within the alliance for recognizing them. This means that such recognition must instead be sought from national governments, and above all from the United States, however difficult that ask might be in American political culture today.

This article previously appeared in Riddle and has been lightly edited for style here. 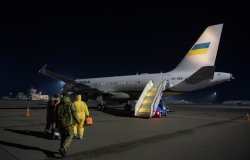 Blog post
Coronavirus
The First Days of COVID-19 in Ukraine
By Yuriy Vakhel on March 23, 2020 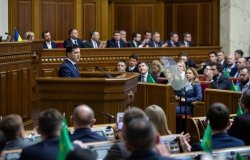